When discussing centralized v. decentralized solar power, there’s an inevitable comparison between solar thermal electric power and solar photovoltaic (PV).  But the fact is that solar thermal power – or concentrating solar power (CSP) – can also be done in … Read More

These 113 MW consist of nine PV projects within close proximity to major utility lines in Southern California. These projects, expected to be concluded in 2013, are primarily located in Los Angeles County and will allow an energy supply to thousands of homes via a 20-year contract with Southern California Edison. [emphasis added]

For one, Craig notes that there’s an unhealthy focus on net metering to the exclusion of other policies (like feed-in tariffs) that can provide a higher value for community projects.  I think he illustrates one of the biggest problems with continuing to rely on net metering for distributed renewable energy projects:

Generally, under net-metering the utility company gets your “excess” solar power for free, say, at the end of the calendar year – solar power that offset the most expensive power on the spot market during times of peak demand in the early afternoon during the summer. You give that to your utility for free under net-metering. [emphasis added]

Perhaps unsurprisingly, when IREC went looking for best practices, it did not look at leading global markets, but stayed within the confines of US borders. The study is typical of US analyses in that respect (see this report at Renewables International). Clearly, the dominant global policy to incentivize renewables is feed-in tariffs, especially in ramping up community projects. IREC even ignores FITs within the US, comparing policies in Massachusetts, California, and Maine, for instance, while Vermont, which has successful, but rather limited feed-in tariff scheme, is mentioned only in terms of its “group billing program.”

Which begs the question of what kind of “community” system can be owned by a utility. Certainly in Germany, a community system is by definition one owned by the community.

IREC goes on to state a preference for utility ownership, an idea I find appalling.  As I noted in my review, utility-owned community solar projects have often asked community participants to pay more for electricity, at a time when most people going solar are making a return on investment.

Overall, I think I agree with Craig’s conclusion:

Given the current policy framework in the US, the report is probably useful. For instance, it discusses how community projects can avoid having to pay income tax on the power generated and how federal tax credits can be utilized. In other respects, IREC’s thinking is clearly still bound to net-metering; if you switch to feed-in tariffs, for instance, the question of “demand charges,” which seems to be an important issue for IREC, becomes completely irrelevant. In effect, the proposals basically show how progress could be made within the current legal framework without any major changes.

IREC’s report provides a good perspective of how to advance community renewables under a “business as usual” policy framework.  If you agree that we might be able to find better policy, however, you might want to read [shameless promotion alert] Community Solar Power: Obstacles and Opportunities instead.

It’s rarely mentioned that a home with a solar array still gets most of its electricity from the grid.  In fact, without storage, a typical home solar array might only serve one-third of a home’s electricity use, even if the … Read More

IN this environmentally conscious college town, thousands of bicyclists commute each day through a carefully cultivated urban forest whose canopy shields riders and their homes from the harsh sun of this state’s Central Valley.

The intensity of that sunshine also makes Davis an attractive place to generate clean green energy from rooftop solar panels. And therein lies a conundrum. Tapping the power of the sun can also mean cutting down some of those trees.

In our recent report – Community Solar Power: Obstacles and Opportunities – we provide a case study of nine operational community solar projects – five of them provide a payback on investment rather than asking a premium price for clean power.

Community solar can save trees, but it can also save participants money. 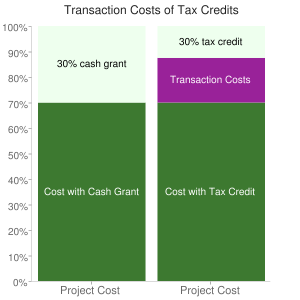