Update 4/6/11: Adam responds on a listserv; his comment is added below.

Adam Browning of Vote Solar writes about a recent study of the peer pressure effect of solar PV adoption.  The linked study notes that for every 1 percent increase in the number of installations in a single ZIP code, there’s a commensurate 1 percent decrease in the amount of time until the next solar installation.  As he writes, “solar is contagious!”

I’m a data lover, so I thought it would be interesting to see what this looks like over time.  If you start with a neighborhood with 25 solar installations, where it was 100 days between the 24th and 25th installation, this peer pressure effect will reduce the time between installations to just 10 days by the 250th PV project. (see chart)

Of course, this process takes a while to unfold.  In fact, if solar PV was being installed only once every 100 days at the outset, the peer pressure effect will take over 15 years to reduce the time between neighborhood installs to 10 days.

The basic formula – written another way – seems to be that a 10-fold increase in local solar installations will result in a 10-fold drop in the time between installations. This will hold true through the second iteration, as well.  In the neighborhood with an initial 100-day lag between installations, it will take another 15 years for the lag to drop to 1 day from 10 days, reaching this level when there are 2,500 local PV projects installed.

Perhaps I can amend Adam’s statement: solar is contagious, but it’s not yet very virulent.

Update (Adam’s reply): I would note that the current strain  (solar expensivus) is not a virulent as future strain (solar cheapus).  Minnesotans are expected to have low resistance — we are talking major epidemic levels of contagion.

Note: If only the experience cost curve for solar PV worked at the neighborhood level, since it typically shows a halving of installed cost for every 10-fold increase in total installed solar capacity (worldwide)!

Cutting non-module solar PV costs with best design practices could make solar PV cost less than grid electricity for more than 25 percent of Americans. Half of the installed cost of a solar PV array is the solar module, but … Read More

Grid parity is an approaching target for distributed solar power, and can be helped along with smarter electricity pricing policy.

Consider a residential solar PV system installed in Los Angeles.  A local buying group negotiated a price of $4.78 per Watt for the solar modules and installation, a price that averages out to 23.1 cents per kilowatt-hour over the 25 year life of the system.*  With the federal tax credit, that cost drops to 17.9 cents.   Since the average electricity price in Los Angeles is 11.5 cents (according to NREL’s PV Watts v2), solar doesn’t compete.

In Los Angeles, there are three sets of electricity prices.  From October to May, all pricing plans have a flat rate per kWh and total consumption.  During peak season (June to September), however, the utility offers two different pricing plans: time-of use pricing and tiered pricing.   Time-of-use pricing offers lower rates – 10.8 cents – during late evening and early morning hours, but costs as much as 22 cents per kWh during peak hours.  Prices fluctuate by the hour.  Tiered pricing offers the same, flat rate at any hour of the day, but as total consumption increases the rate does as well.  For monthly consumption of 350 kWh or less, the price is 13.2 cents.  From 350 to 1,050 kWh, the price is 14.7 cents.  Above 1,050 kWh, each unit of electricity costs 18.1 cents.

The following chart illustrates the difficulty in determining whether solar has reached “grid parity” (e.g. the same price as electricity from the grid).  For some marginal prices, solar PV is cheaper than grid electricity when coupled with the federal tax credit.

Over the course of the year, solar is not less than grid electricity.  A very rough calculation of the expected time of day production of a solar array in Los Angeles finds that the average value of a solar-produced kWh is 15.1 cents over a year.  That suggests that solar power is not yet at grid parity, even with time-of-use pricing.

There are other considerations, as well.

For one, we ignored additional incentives for solar power, including federal accelerated depreciation (for commercially-owned systems) as well as state and utility incentive programs.  These programs substitute taxpayer dollars for ratepayer ones, making the cost of solar to the grid lower.

We also didn’t confront the complicated issues involving a grid connected solar PV system.  Net metering is the rule that governs on-site power generation and it allows self-generators to roll their electricity meter backward as they generate electricity, but there are limits.  Users typically only get a credit for the energy charges on their bill, and not for fixed charges utilities apply to recover the costs of grid maintenance (and associated taxes and fees).   Producing more than is consumed on-site can mean giving free electrons to the utility company.  So even if a solar array could produce all the electricity consumed on-site, the billing arrangement would not allow the customer to zero out their electricity bill.

Where Can Distributed Solar Compete?
Based on our own analysis, solar PV at $5 per Watt (with solely the federal tax credit) could not match average grid electricity prices in any of the sixteen largest metropolitan areas in the United States.  With accelerated depreciation – an incentive only available to commercial operations – solar PV in San Francisco and Los Angeles (representing 21 million Americans) could compete with average grid prices near $4 per Watt installed cost.

Under a time-of-use pricing plan (where prices could be 30% higher during solar hours, as in Los Angeles), 40 million Americans would live in regions where solar PV could compete with grid prices at $5 per Watt with both federal incentives.

With solar at $4 per Watt, Californians would only need the tax credit (not depreciation) for grid parity with time-of-use rates.  Adding in the depreciation bonus would increase the number to over 62 million Americans.

Distributed solar is nearing a cost-effectiveness threshold, when it will suddenly become an economic opportunity for millions of Americans.

*Note: for regular readers, we changed and improved our levelized price model (in response to some comments on our cross-post to Renewable Energy World). 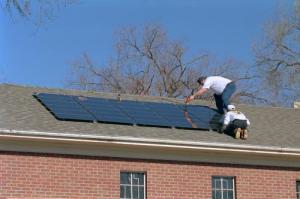 Craig Morris has a thorough discussion of why feed-in tariffs (CLEAN Contracts) and other renewable energy policies are still necessary even when renewables get to grid parity.  It’s a direct response to an earlier piece on Renewable Energy World claiming that the best strategy for solar is to get off incentives.

First, he notes that there’s a pervasive myth that feed-in tariffs have failed:

In fact, every gigawatt market in the world for PV was driven by feed-in tariffs. Mints is right that some of these markets have gone bust, but do the other markets (like Germany) that haven’t gone bust not show us how to do it right? I can’t say that of other PV policies (think of the US or pre-FIT Britain).

Can we agree that solar feed-in tariffs have not failed in “most” countries – and that no non-solar FIT market has undergone boom-and-bust anywhere? A more accurate description would be that feed-in tariffs are the only policy that has led to major success stories for solar, but that some incompetent governments threw in the towel when they saw the price tag.

Morris also notes that the price tag is another myth – feed-in tariffs are a less expensive policy tool than most others:

Mints writes, “Here’s the golden rule of incentives: they are expensive, and someone has to pay the bill.” Actually, it’s photovoltaics that’s expensive, not feed-in tariffs. Studies have repeatedly found that feed-in tariffs are the least expensive way to promote renewables.

The bigger issue is that getting to grid parity is not an end in itself:

FITs for wind and biomass have generally always been below the retail power rate, so why should anything change when solar is no longer the exception? As Mints herself points out, conventional energy sectors also continue to be subsidized. Why should the situation ever be any different for photovoltaics?

Morris goes on to describe how solar below the retail rate will create a massive rush to solar that will actually make electricity more expensive (as solar installers take a larger cut of the favorable economics and increased solar capacity scales down baseload fossil fuel power plants during peak hours).  Instead:

But what we probably need over the long run are feed-in tariffs that pay for power production from intermittent sources (especially solar and wind) with a fluctuating premium based on power demand; when renewable power production approaches or exceeds demand too often, the premium will not be paid, and investments in such technologies will not pay for themselves as quickly. The floating cap will find itself, so to speak.

The Germans have already adopted such a policy, called “own generation“.  And a few U.S. states – where solar is already cheaper than peak electricity prices – will need a similar policy innovation.

Update: It’s important to note that this refers to the net installed cost.  In other words, the installed cost dropped because residential solar customers were now getting an uncapped federal tax credit. We wrote in this 2009 report about the … Read More

It’s rarely mentioned that a home with a solar array still gets most of its electricity from the grid.  In fact, without storage, a typical home solar array might only serve one-third of a home’s electricity use, even if the … Read More

Distributed generation (DG) puts energy production close to where it is consumed, often on people’s homes or in their backyards.  But just having a rooftop solar module doesn’t mean that every kilowatt-hour produced from sunlight is used in the home.  … Read More

The American Wind Energy Association (AWEA) recently released the results from their Small Wind Turbine Global Market Study, reporting that high up Ãƒ¢Ã‚â‚¬”front costs are preventing small wind systems from reaching their growth potential. The small wind industry has been experiencing annual growth in the range of 14-25% since 1985. AWEA says that Increased federal incentives could double the growth rate.… Read More