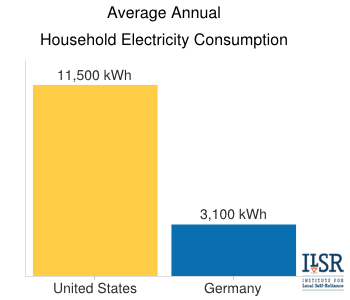 Your mind-blowing chart of the day, courtesy of Arne Jungjohann at the Heinrich Böll Foundation. Source for U.S. use; source for German use; used U.S. average household size of 2.6.

In a forthcoming report on U.S. feed-in tariff programs, I’ll provide a comparison of solar feed-in tariff (FIT, a.k.a. CLEAN Contract) rates across the United States. Comparing published rates is not particularly helpful, however, because contract lengths vary (from 15 to … Read More

Back for a second round, the Open Neighborhoods organization in Los Angeles has organized another group purchase of residential and commercial solar PV, bringing the cost of solar incredibly close to the cost of grid power. With grid prices constantly rising, the lifetime savings of going solar have never looked better.

The savings from the group purchase are enormous.  With prices are around $4.40 per Watt installed for solar, Open Neighborhoods gets residential solar for $2.00 cheaper than the average prices reported by the Solar Energy Industries Association for the second quarter of 2011.  That equates to a 6 cents per kilowatt-hour savings on solar over 25 years.  Even with solar typically being cheaper in California, the group advertises savings of as much as 33% on a residential solar array.

The following chart illustrates the comparison between the cost of power from a rooftop solar array purchased as part of this group buy versus grid electricity at a flat rate. 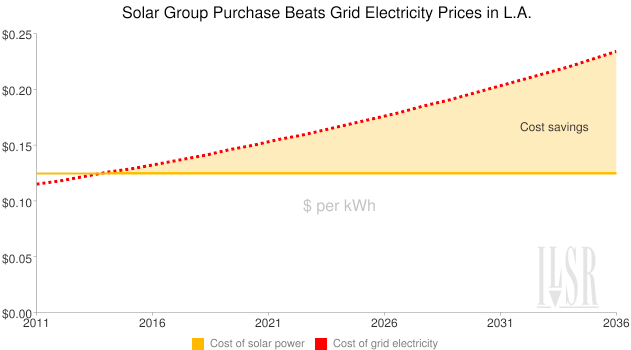 The results are promising and show that economies of scale can be achieved even with residential solar, if folks work together.

Update: It’s important to note that this refers to the net installed cost.  In other words, the installed cost dropped because residential solar customers were now getting an uncapped federal tax credit. We wrote in this 2009 report about the … Read More

In by far the most exhaustive and detailed study to date, the National Renewable Energy Laboratory (NREL) found that solar homes sold 20% faster, for 17% more than the equivalent non-solar homes, across several subdivisions built by different California builders.

The study looked at a number of housing developments where the homes were otherwise identical except for the solar energy systems.

Also interesting was that buyers were more interested in solar when it was-preinstalled:

If solar was already on the house, and factored into the price already, buyers were more likely to pick a house with solar. But if it was just one more decision to be made at the point of purchase, the decision got shelved.