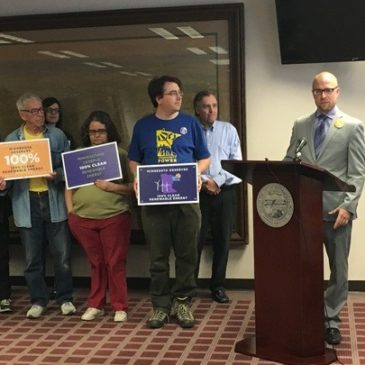 In this episode of Local Energy Rules, Energy Democracy Initiative director John Farrell speaks with Minneapolis City Councilmember Jeremy Schroeder about the city’s unique partnership with its incumbent utility companies and other tools the city can use to address climate change locally.… Read More

Wal-Mart wants to build a 150,000-square-foot supercenter in Upper Hanover Township, a rural corner of Pennsylvania about one hour northwest of Philadelphia. The supercenter would anchor a large shopping complex, including twin strip malls on opposite sides of the highway. Two years ago, Wal-Mart would have needed no more than an okay from Upper Hanover officials to proceed.… Read More

Big box retailers are rapidly rolling out stores throughout Minnesota. Wal-Mart and Target are leading the pack with plans to build hundreds of new "supercenters" nationwide. These giant 200,000-square-foot stores are twice the size of a standard Wal-Mart and include general merchandise and a full supermarket, plus dozens of specialty vendors, from florists to gas stations. Wal-Mart is scouting locations for a supercenter on the North Shore of Lake Superior. Small townships like Lakewood are likely sites. Wal-Mart is already building a supercenter in Cloquet and plans to abandon its existing 100,000-square-foot outlet when the new store opens.… Read More

The town of Mamaroneck, New York recently took steps to protect its character and environment from large-scale developments that abut, adjoin, or are adjacent to its borders. Under a zoning ordinance enacted in April, the town now requires these developments to undergo a comprehensive review and obtain a permit from the Mamaroneck Town Board. … Read More