Shirley Sherrod has her job back and a presidential apology. ACORN is still waiting. The cases are remarkably similar. Both Sherrod and ACORN were demonized by highly edited videos appearing on right-wing websites and widely publicized by Fox News and conservative radio hosts. In both cases the mainstream media and the federal government rushed to judgment … Read More

Gimme Shelter by David Morris Originally published in The Minneapolis Observer, February 17, 2004 Politics involves making choices. This legislative session we’re making choices about how to spend some three quarters of a billion dollars.  The menu is largely restricted to constructing shelters(buildings) of one sort or another. It gladdens me to see how much our … Read More

The Republican Budget Plan: He Who Has, Gets by David Morris July 5, 1997 – published in St. Paul Pioneer Press I don’t want to accuse the Republicans of engaging in class warfare. Really. But when I look at their tax and spending policies I am hard pressed to figure out what else to call it. … Read More

The Budget Surpluses Challenge Us To Manage Our Own Affairs by David Morris March 13, 1997 – published in St. Paul Pioneer Press How glorious to be a state legislator these days. Budget surpluses in 48 of 50 states. Eight states with surpluses that exceed l0 percent of their budgets. A strong economy that continues to … Read More 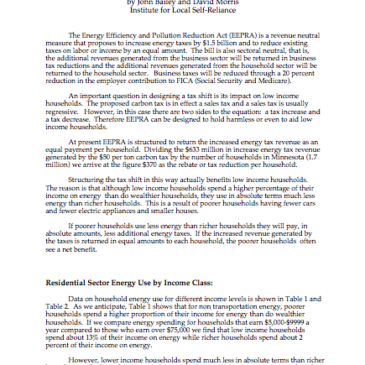 This March 1997 report by John Bailey and David Morris examines how the proposed $1.5 billion tax shift in Minnesota would impact low income households and offers ways to mitigate the net effect of the tax shift on these households. The Energy Efficiency and Pollution Reduction Act (EEPRA) is a revenue neutral measure proposed in Minnesota to increase energy taxes by $1.5 billion and to reduce existing taxes on labor or income by an equal amount.

From Roosevelt to Gingrich: A Revolution in Compassion by David Morris November 8, 1995 At the 1932 Democratic Convention, the newly nominated Franklin Delano Roosevelt declared, “The first obligation of government is the protection of the welfare and well-being…of its citizens.” That new idea spawned the New Deal. In January, Republicans vowed to overturn the Roosevelt … Read More

Congress, the Elderly and the Future of Health Care by David Morris October 24, 1995 They almost got away with it. Last year’s defeat of the Democratic health care plan taught the Republicans the risks of allowing the public time to digest and debate government proposals. This year the GOP decided to avoid this messy exercise … Read More