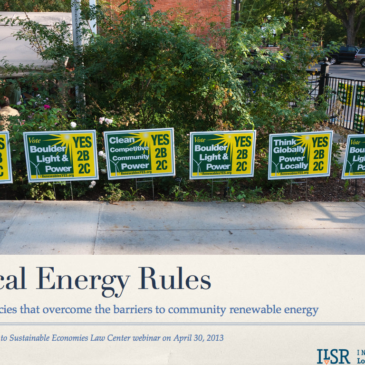 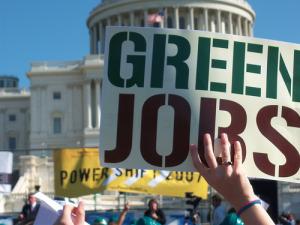 Can a state with a renewable energy mandate require green jobs to stay at home?  Litigation has made states into tepid defenders of their job rights, but states have the legal ground to go great lengths to keep more of the economic development from their renewable energy industry inside their borders.

No renewable energy mandate passed a state legislature without the promise of thousands of new jobs, but many states have shared the recent experience of Massachusetts: the state’s largest solar manufacturing plant announced that it is moving production to China.  Evergreen Solar is moving despite the state’s commitment of $44 million in subsidies to support the plant and its manufacturing jobs.  The state is losing out on manufacturing jobs despite its citizens’ commitment to (if necessary) pay more for electricity from renewable sources.

In contrast, last week I wrote about Ontario’s clean energy program, well on its way to 5,000 megawatts of new renewable energy production and supporting over 40,000 new jobs.  Over 20 new manufacturing plants have been announced.  The keystone of this program is a ‘buy local’ rule that requires wind and solar power projects who want the province’s attractive power payments to be constructed with at least 60 percent of their materials ‘made in Ontario.’  Ontarians are getting cleaner electricity and significant economic development for their clean energy commitment.

U.S. states can do much more to secure the economic benefits of their clean energy mandates, even if they can’t copy Ontario’s law verbatim (see our recent report on Ontario’s program for more on the international trade controversy).

Traditionally, U.S. states have limited their economic development policy to subsidy programs, offering grants, loans, and tax breaks to manufacturers to locate within the state.  Businesses let states bid against one another for scarce jobs.  The result is a repeat of Massachusetts’ experience with Evergreen Solar.  Manufacturers accept subsidies and then leave when it suits their bottom line.

Some states have tried more.  Ohio and Illinois require part of their renewable energy standard to be meet with in-state projects.  Other states provide greater credit toward compliance with their renewable energy standard for in-state projects.  One state, Washington, offers multipliers to a state tax credit for projects with “made in Washington” parts.

No state has gone as far as Ontario to require local purchasing of components, partly because more robust policies to require in-state development have often been threatened with lawsuits under the Supreme Court’s Dormant Commerce Clause.

The linchpin to a commerce clause dispute is whether the law in question discriminates against out-of-state economic interests and, in particular, whether it burdens them while benefitting in-state interests.  Enacted in a U.S. state, Ontario’s buy local requirement would likely trigger than discrimination clause, requiring the state to prove that the law “advances a legitimate local purpose that cannot be adequately served by reasonable nondiscriminatory alternatives.” (Source: Richard Lehfeldt, Woody N. Peterson, and David T. Schur.  Commerce Clause Conflict.  (Public Utilities Fortnightly, December 2010)).   Success in this situation is rare, and yet clean energy economic development may meet the requirements.  A recent article in Public Utilities Fortnightly magazine on the Massachusetts case highlights how states could move beyond jobs subsidies:

First, be explicit about the incentives being offered for in-state investment.  In particular, “The opportunity to enter into a long-term PPA should be one of the benefits offered to successful bidders as part of the state’s development initiative, not the starting point.”  In fact, the article notes, this is exactly what happens in regulated electricity markets, where the state provides a utility franchise and the exclusive right to build and rate-base new power generation.  The PPA follows from the commitment to local development.

The state must also be explicit about the functional difference between a power plant developed in-state as opposed to out-of-state, with specifics about the technology and the site.  For example, redeveloping a brownfield site in state is much more valuable than simply importing clean electricity.

Finally, states have legitimate environmental objectives for in-state power generation.  “A state that seeks new in-state renewable power plants may increase its reserve margins, improve its air quality, displace fossil-fuel based generation, avoid transmission congestion charges that may apply, and may also avoid or defer the need to build new transmission lines.”  All of these are “legitimate local purpose[s] that cannot be adequately served by reasonable nondiscriminatory alternatives.”

In other words, under the strict discrimination clause there is room for states to favor local development.  But there are also several nondiscriminatory strategies that can also pass legal muster.

States that favor in-state production without placing an “excessive burden” on out-of state entities have nondiscriminatory policies.  There are several illustrations of this at work.  In Minnesota, an ethanol producer incentive provided 15 cents per gallon of ethanol produced in-state and nothing for out-of-state suppliers, who were still allowed to sell in Minnesota.  The state of Washington provides a significant multiplier to its solar PV incentives for domestically produced inverters and solar modules.

If U.S. states fear the legal conflict over a discriminatory clean energy policy, they could instead emulate Turkey.  Turkey provides renewable energy producers a standard offer, long-term CLEAN contract for anyone who builds in the country, but they provide bonus payments for renewable energy projects that are “made in Turkey.”  These payments increase the per kWh contract anywhere from 32% to 146%, depending on the renewable technology.

Over thirty states have committed themselves to renewable energy and potentially higher electricity costs.    In exchange, states should consider their legal authority to keep those jobs within state borders and to the economic advantage of its citizens.

The PSB, the regulatory authority, ruled that no challenger, including DPS, had “demonstrated that the standard offer program is invalid”. Under Vermont law, the PSB has the “obligation to implement statutes passed by the legislature,” it said, and, thus, it was their duty to do so if the law is valid.

Under pressure from Ikea, Wal-Mart, and Costco, the Irish government has relaxed its seven-year-old cap on the size of retail stores. The changes apply to certain areas of Dublin and eight other towns. The cap, which was adopted on a temporary basis in 1998 and made permanent in 2001, restricted stores selling food (including hypermarkets, which sell both food and non-food merchandise) to no more than 3,500 square meters (38,000 square feet) in Dublin and 3,000 square meters (32,000 square feet) throughout the rest of the country.… Read More

A group of California state lawmakers, led by Assemblywoman Sally Lieber, are calling for the legislature to require that the California Public Employees’ Retirement System (CalPERS) sell its 18.8 million shares of Wal-Mart stock, valued at about $1 billion. "The Legislature needs to take a close look at how we put our money behind our values," Lieber told the Associated Press. "Wal-Mart is making a big push to expand in many areas of our state. … Read More

Newsstand owners in New York City have filed a legal challenge to a new law that would transfer ownership of the city’s 300 independent newsstands to a single corporation. Under the law, which was backed by the mayor and endorsed by all but three city councilors, the eclectic newsstands will be replaced by identical kiosks under central ownership. Five companies, including JCDecaux, which manages "street furniture" in 3,500 cities worldwide, are bidding for the contract. … Read More

The U.S. Supreme Court has agreed to hear a case early next year that could set new limits on the ability of cities to condemn and take property for private redevelopment projects. There have been many cases in recent years where local governments have seized homes and small businesses to make way for chain retail development. In downtown Port Chester, New York, for example, bulldozers are currently leveling a 27-acre site that once housed numerous small businesses.… Read More