We’ve discussed the unconventional wisdom that economies of scale are limited for wind and solar (and likely other renewable energy technologies).  Another piece of evidence comes from a December 2009 report by the Electric Power Research Institute (EPRI): Solar Photovoltaics: Status, Costs, and Trends. This chart, taken from page 14, illustrates the percent of the total … Read More

Key benefits of distributed power generation (DP). Proven technologies for DP are widely scalable. Obvious example: a wind farm can be incrementally built in multiples of approximately 1.4 MW. Bigger doesn’t necessarily mean “cheaper” for DP. Customers can match the DP capacities to precisely known needs and not have to over-buy equipment. (see Figure 1 in … Read More

When discussing centralized v. decentralized solar power, there’s an inevitable comparison between solar thermal electric power and solar photovoltaic (PV).  But the fact is that solar thermal power – or concentrating solar power (CSP) – can also be done in a distributed fashion. In fact, of the 21 operational CSP plants in the world, 18 are … Read More

A new 25 megawatt wind project in southwestern Minnesota will feature greater local ownership than most, using a model that Project Resources Corporation calls “Minnesota Windshare”.  The project should be online by early 2011:

Construction crews this fall are assembling 11 turbines that will make up the $51 million Ridgewind project near Lake Wilson, about 20 miles east of Pipestone. The project also will come with a new endeavor for its developer, Minneapolis-based Project Resources Corp., that the company hopes will increase the economic influence wind projects can have on a community.

The PRC project will use the familiar “Minnesota Flip” model of wind project development, where a large equity investor provides the capital and holds majority ownership for 10-15 years, along with any landowner who hosts a turbine.  The interesting twist is in the flip, where more community investors can come into the project when the equity investor departs.  This WindShare program [pdf] could allow many people who don’t have land suitable for wind or significant capital to nevertheless participate in a wind power project.

The news story is featured in a South Dakota paper, the Argus Leader, which quotes a South Dakota Public Utilities Commissioner saying that the Minnesota-based PRC project won’t capture the economies of scale of a larger, 100 MW project in South Dakota.

“Frankly, the South Dakota model is better,” Johnson said. “If you take a large wind farm, you get economies of scale. You carve out a piece of that where local South Dakota investors can put their money into that,” he said.

Except that the data show wind power plant economies of scale are maximized for projects in the 5-20 MW range, not 100 MW and over.

Federal tax credits for wind energy projects are due to start expiring at the end of this year, which means developers face the prospect of dishing up proposals for wind farms that can’t be financed, said White, president of Project Resources Corp., a Minneapolis company that does ‘community wind’ development.

Ironically, the smaller projects (5-20 megawatts) are also the least expensive per kilowatt of capacity.

I spoke with a Minnesota-based wind developer in late 2010 and in a wide-ranging conversation about developing distributed wind projects, he remarked:

“Economies of scale are bullshit”

I had a conversation with a wind developer yesterday and was talking about the difference between putting together large projects (over 80 MW) compared to distributed generation wind projects (80 MW and under).  I mentioned that we have a deep interest in understanding the economies of scale of renewable energy projects and he replied, “economies of scale are bullshit.”  He noted that large wind projects require significant development costs that smaller projects don’t encounter (including many more landowner negotiations and permits) and that installation and maintenance services are sufficiently widespread for any sized project to find services.

It’s not entirely true that bigger projects have no economies of scale, but these two charts illustrate the larger point: Most economies of scale in solar PV and wind power are captured at a relatively small size.

The first chart is from the California Solar Statistics website, and draws on data from over 70,000 solar PV installations in California since 2005. 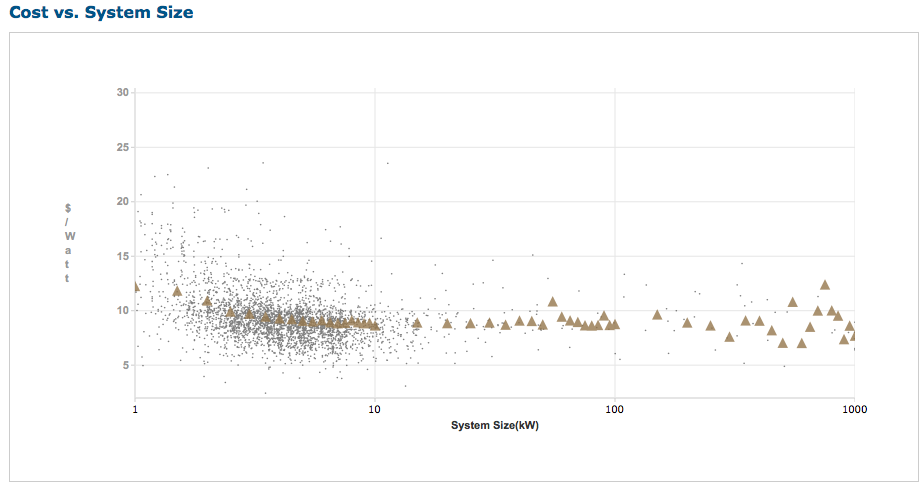 Clearly, solar PV installations of 10 kW have captured more of the economies of scale for solar PV.  Costs may fall slightly for much larger projects, but the smaller number of projects makes it hard to see trends (interesting note: there seem to be as many > 100 kW solar projects costing over $10 per Watt as there are under $8 per Watt).

The second chart comes from the 2009 Wind Technologies Market Report by Ryan Wiser and Mark Bolinger (which is a must-read). 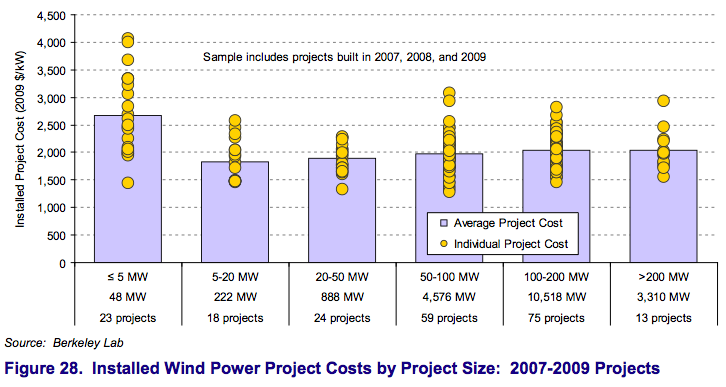 The wind data is even more striking, with the lowest average project cost found in the projects with just a handful of turbines (5-20 MW of capacity), with costs steadily rising for larger projects.  Certainly there’s an advantage to having more than one turbine, but less so for growing the project much larger than 10 turbines.

This data should inform renewable energy policy.  If modest-scale, distributed renewable energy projects capture most (or all) economies of scale, then the opportunity to place these projects close to load may reduce the need for new, long-distance, high-voltage transmission lines.   It means more renewable energy can come online faster and with fewer political battles.

These smaller-scale projects are also the appropriate size for local ownership (which provides twice the jobs and 1-3 times the economic impact of absentee ownership), allowing more the economic benefits of renewable energy development to accrue to the host community.

An article in the New York Times last week suggested that a dearth of financing is holding back solar power in the United States. In particular, the authors note that “the country needs to build large plants covering hundreds of acres,” projects that can cost $1 billion. These large solar projects are languishing without financing, they … Read More

Distributed solar photovoltaic (PV) proponents have recognized that solar is not without economies of scale – larger installations generally have lower installed costs per Watt of peak capacity.  But new data suggests that these economies are significantly smaller than previously believed.  This is good news for solar and great news for the renewable energy movement. First … Read More