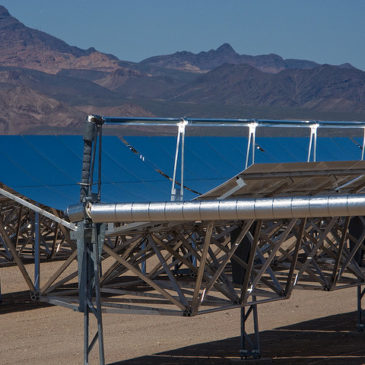 Yesterday New York Times reporter Matt Wald had a piece on the role of energy storage in supporting the expansion of renewable energy.  However, his specific focus on solar thermal power generation overlooks the potentially high costs of relying on … Read More

In May, I compared the water consumption of fossil fuel power plants to various solar technologies, noting that wet-cooled concentrating solar thermal power (think big mirrors) uses more water per megawatt-hour (MWh) than any other technology.  The following chart, from the earlier post, illustrates the amount of water used to produce power from various technologies. 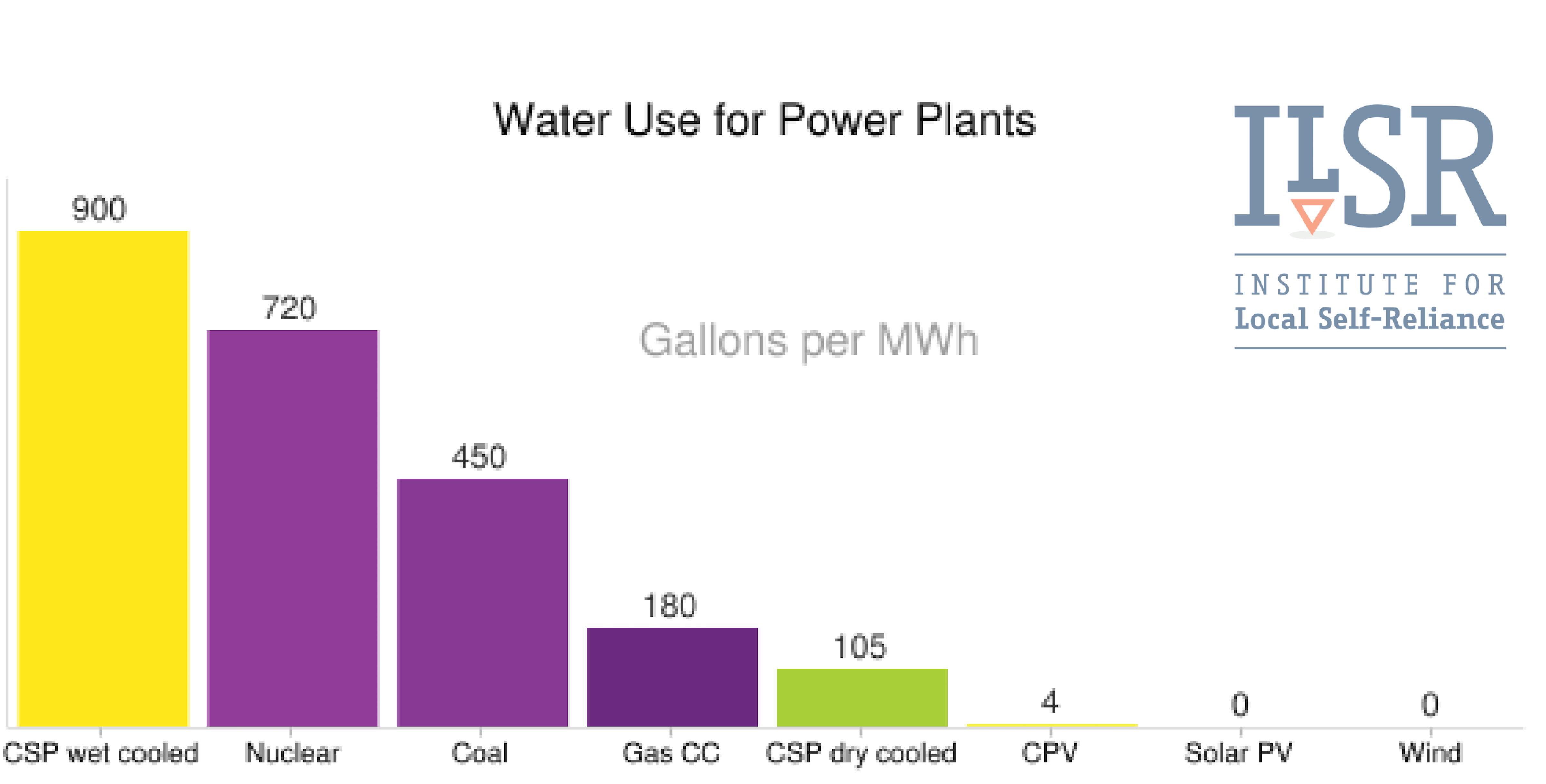 Water consumption can be cut dramatically by using “dry-cooling,” but this change increases the cost per kilowatt-hour (kWh) of power generated from concentrating solar power (CSP).  In the 2009 report Juice from Concentrate, the World Resources Institute reports that the reduction in water consumption adds 2-10 percent to levelized costs and reduces the power plant’s efficiency by up to 5 percent.

Let’s see how that changes our original levelized cost comparison between CSP and solar PV.  First, here’s the original chart comparing PV projects to CSP projects, with no discussion of water use or energy storage. 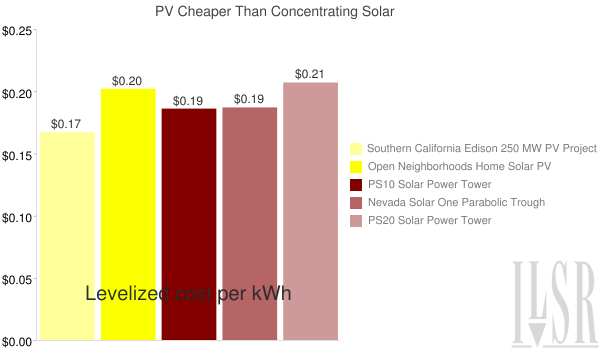 To make the comparison tighter, we’ll hypothetically transform the CSP plants from wet-cooled to dry-cooled, adjusting the levelized cost of power.

Using the midpoint of each estimate from Juice from Concentrate (6 percent increase to levelized costs and 2.5 percent efficiency reduction), the change in the cost per kWh for dry-cooling instead of wet-cooling is small but significant.  For example, all three concentrating solar power projects listed in the chart are wet-cooled power plants.  With a 6% increase in costs from dry cooling and a 2.5% reduction in efficiency, the delivered cost of electricity would rise by approximately 1.7 cents per kWh.

The following chart, modified from our earlier post, illustrates the comparison. 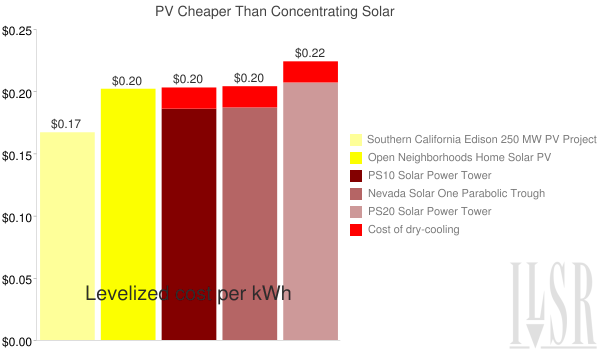 With the increased costs to reduce water consumption, CSP’s price is much less competitive with PV.  In our May post, we noted that a distributed solar PV program by Southern California Edison has projected levelized costs of 17 cents per kWh for 1-2 MW solar arrays, and that a group purchase program for residential solar in Los Angeles has a levelized cost of just 20 cents per kWh.

But there’s one more piece: storage.

While Nevada Solar One was built without storage, the PS10 and PS20 solar towers were built with 1 hour of thermal energy storage.  Let’s see how that changes the economics.

To make the comparison comparable, we’ll add the cost of 1 hour of storage to our two PV projects, a cost of approximately $0.50 per Watt, or 2.4 cents per kWh.  The following chart illustrates a comparison of PV to CSP, with all projects having 1 hour of storage (Nevada Solar One has been removed as it does not have storage). 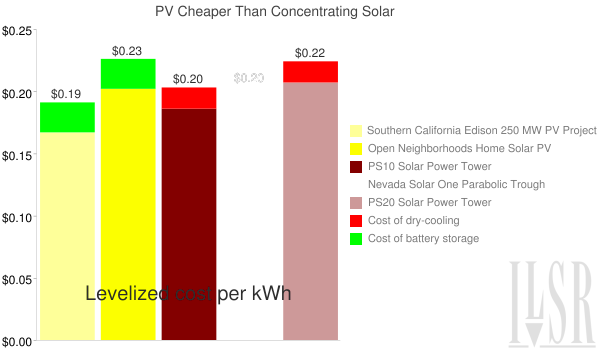 When comparing CSP with storage (and lower water use) to PV with battery storage, we have a comparison that is remarkably similar to our first chart.  Distributed PV at a commercial scale (1-2 MW) is still cheaper than CSP, but residential PV is more expensive.

Even though dry-cooled CSP competes favorably on price, it still uses much more water than PV.  That issue is probably why many solar project developers are switching from CSP to PV technology for their large-scale desert projects.

Without a significant cost advantage, the water use of CSP may mean an increasing shift to PV technology.