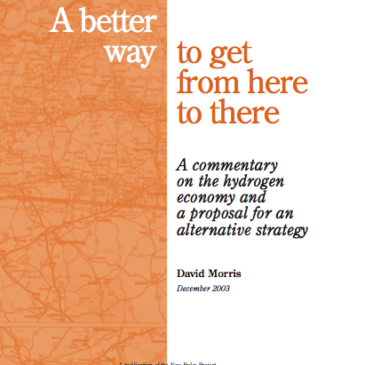 The Hybrid Highway The hydrogen-fueled transit vision being peddled in Washington and Sacramento obscures a more achievable alternative. by David Morris Originally published in Mother Jones, January/February 2004 For the first time in history, California and Washington may be on the same page when it comes to transportation. That is wonderful or worrisome depending on one’s … Read More

The Ethanol Glass Is Still Only Half Full by David Morris originally published in Ethanol Today, September 2003 The ethanol industry is alive and well. By the middle of next year demand could exceed 3 billion gallons. As New York, Connecticut and other states phase out MTBE demand could surpass 4 billion gallons by 2007. These … Read More 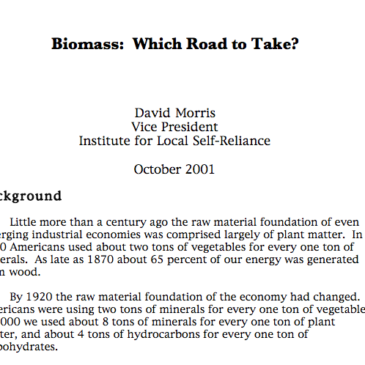 This October 2001 paper by David Morris looks at how plant matter must be an important element in a sustainable economy because it is the only renewable resource from which we can fashion physical products. In the next few months and years we will be making decisions at the local, state, national and international level that will channel tens, perhaps hundreds of billions of dollars of money into certain areas and markets. We are changing the rules.

One of the most controversial issues relating to ethanol is the question of what environmentalists call the “net energy” of ethanol production. Simply put, is more energy used to grow and process the raw material into ethanol than is contained in the ethanol itself? In 1992, ILSR addressed this question. Our report, based on actual energy consumption data from farmers and ethanol plant operators, was widely disseminated and its methodology has been imitated by a number of other researchers. This paper updates the data in that original report and addresses some of the concerns that some reviewers of the original report expressed. … Read More