The carbohydrate economy could transform agriculture as well as energy, reviving producer co-ops, and giving farmers a hedge against voilatile commodity prices. For the first time in 60 years, the carbohydrate economy is back on the public-policy agenda. It is an exciting historical opportunity, but one we should approach with deliberation and foresight.

Last week, a dozen cities, over 100 public power utilities, businesses and a host of national policy groups kicked off a nationwide campaign to urge automakers to accelerate development of plug-in hybrid vehicles. The “Plug-In Partners” campaign is hoping to demonstrate a large market potential so that automakers will start producing plug-in vehicles.

On November 10th, several Senators from midwestern states introduced the Fuel Security and Consumer Choice Act. The bill would require all U.S. marketed vehicles to be manufactured as Flexible Fuel Vehicles (FFVs) within ten years. FFVs can use both regular gasoline and varying blends of renewable fuels like E-85 (motor fuel with 85 percent ethanol content). 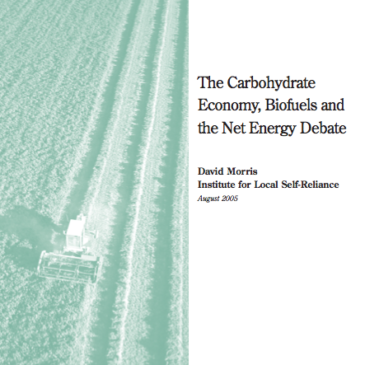 A new report from the Institute for Local Self-Reliance offers a scathing critique of a 2005 study by biofuels critics, Professors David Pimentel and Tad Patzek. David Morris, ILSR’s vice president and author of the study, The Carbohydrate Economy, Biofuels and the Net Energy Debate, stresses that “A carefully designed biofuels strategy may be the answer not only to our energy problems but to another global dilemma as well: the plight of agriculture.”

David Morris, Vice-President of the Institute for Local Self-Reliance gives a presentation on energy and biofuels to the National Press Club on August 23, 2005.… Read More

On May 10th, Minnesota’s Governor signed a bill into law that could result in a requirement that the state’s gasoline supplies contain 20 percent ethanol (E-20). If the rules go into effect, it would double the current 10 percent ethanol blends that are now standard throughout the state.

Under the legislation, a new E-20 mandate would take effect in 2013 unless ethanol has already replaced 20 percent of the state’s motor vehicle fuel by 2010. The rule would expire at the end of 2010 if Minnesota is not granted federal approval to use E-20 gasoline blends.

A strategic report on developing a sustainable biomass policy, prepared for a foundation in 2001, offers a vision that is still relevant today.