Does it take more energy to make ethanol than is contained in ethanol?  That question continues to haunt the ethanol industry even after nearly 30 years of expanding production.  Over the years more than 20 scientific studies have examined the question.  This document contains links to the major studies of the subject completed during the last decade or so.… Read More 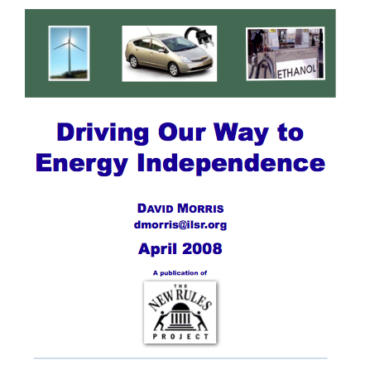 Updating our pathbreaking 2003 report, this June 2008 report by David Morris describes how commercially available technologies today could transform our petroleum powered transportation system into one powered by electricity and biofuels. Provisions in the recently passed Energy Act could accelerate that transformation. With the adoption of complementary policies, the revolution in our transportation sector can generate an equally profound revolution in our electricity sector. Hundreds of thousands of locally owned wind turbines and solar electric arrays supplying flexible fueled, plug-in hybrid vehicles can allow tens of millions of Americans to become energy producers not just energy consumers.

Today, cellulosic ethanol can no longer be ignored. Even as the quantity of ethanol from corn increases, the age of corn ethanol is drawing to a close. Few new corn-to-ethanol plants will be built beyond those currently in the ?nancing and construction pipeline. The opportunity to build on the farmer-owned corn-to-ethanol biore?nery model is over. But the opportunity for local ownership is just beginning for cellulosic biofuels.  This piece by David Morris was originally published in Ethanol Today magazine. … Read More

Updating a pathbreaking 2003 report, ILSR’s March 2008 report, Driving Our Way to Energy Independence, describes how commercially available technologies today could transform our petroleum powered transportation system into one powered by electricity and biofuels. Provisions in the recently passed Energy Act could accelerate that transformation.… Read More

A new policy brief from Institute for Local Self Reliance criticizes the authors of two recent studies published in Science for advancing a conclusion not supported by their own studies. ILSR’s paper notes that the vast majority of today’s ethanol production comes from corn cultivated on land that has been in corn production for generations.… Read More 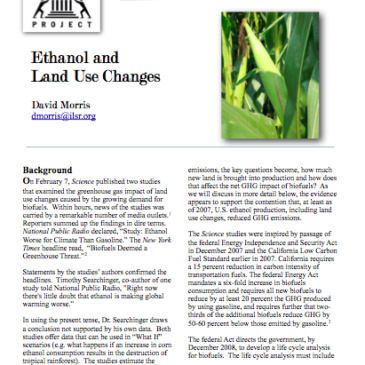 On February 7, 2008, Science published two studies that examined the greenhouse gas impact of land use changes caused by the growing demand for biofuels. Within hours, news of the studies was carried by a remarkable number of media outlets. Reporters summed up the findings indire terms. National Public Radio declared, "Study: Ethanol Worse for Climate Than Gasoline." The New York Times headline read, "Biofuels Deemed a Greenhouse Threat."… Read More

A new policy brief from the Institute for Local Self-Reliance concludes that universal dividends are a critically important tool to create the political will and public acceptance for a carbon cap. Universal dividends have the potential to hold harmless a large segment of consumers while we move to a low-carbon economy. Moreover, the universal dividend honors the principle that the sky belongs to all of us equally.… Read More

This column by ILSR’s John Farrell argues that in their desire to expand renewable-energy production, activists and policymakers focus almost entirely on “more,” rather than “better.” Twenty-seven states have renewable-energy standards, requiring utilities to produce or sell 10, 20, even 30 percent of electricity from renewable sources in the next two decades. The U.S.… Read More

Congress and most state legislatures have or are developing renewable energy policies with a single objective: get more renewables. Our new study, Wind and Ethanol: Economies and Diseconomies of Scale, finds that this single minded focus ignores the potential economic benefits from locally owned and more modestly scaled facilities. The focus should on better renewable energy projects not simply more.