ILSR in cooperation with Penn State’s Hamer Center for Community Design conducted a second deconstruction pilot project to determine cost-effective methods to remove lumber and other materials from an NTI abandoned house. The US Environmental Protection Agency funded the project and the City of Philadelphia provided the house for deconstruction.

Kevin Brooks Salvage (KBS), a local minority contractor, performed the deconstruction work on the 3224 Susquehanna unit, half of a residential twin building. KBS was selected because the firm provided the lower bid and the more complete bid package.

The project work took place from March 27-April 7, 2006. At the Hamer Center’s direction, the KBS crew experimented with the use of a mechanized, panelized approach of removing lumber. The dismantling process involved cutting the roof and floor panels into sections and removing them to an off-site location for processing.

The retail value of the recovered materials that have been sold or used directly by KBS is $6,530. The project was successful in demonstrating that deconstruction can be cost-competitive with hand demolition when there are sufficient recoverable materials to offset the high labor costs.

ILSR and KBS believe that the project costs could be lowered in future projects based on the following factors:

ILSR presented the findings to representatives from several City of Philadelphia agencies and is exploring with them policy options for encouraging deconstruction and salvage practices in the removal of condemned buildings in the City. 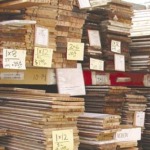