In the first half of 2014, distributed local solar power constituted over 25% of new power plant capacity. This impressive growth continues several years where solar power has grown by leaps and bounds, producing power right where it’s needed and juicing up local economies.

But many states have limited how much of their electricity can come from local sources like rooftop solar, by capping their net metering programs. Net metering allows those with solar to roll back their electric meter when they produce energy from the sun, just as they could reduce their electric bill with an energy efficient refrigerator. Net metering is also seen as a threat by utilities, as it reduces electricity purchases and reduces demand for new power plants.

States should make sure their limits on local power reflect actual technical limitations of the grid, and not just utility interests in protecting market share.

The map below shows the enacted net metering limits and, where available, the progress toward meeting that cap (in the small pie charts). Data are from the National Renewable Energy Laboratory. 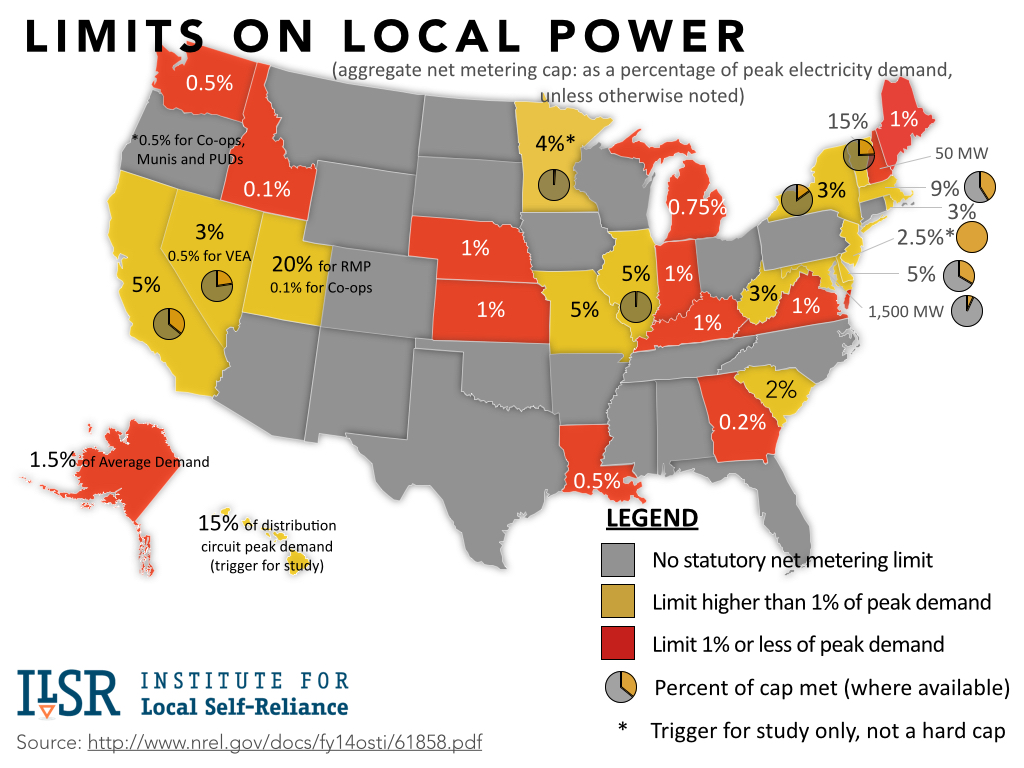 What’s interesting is that many states don’t have limits, despite having a robust solar market. Arizona, for example, has the second most installed solar capacity, but no net metering limit. Utilities have instead focused on increasing the cost for solar producers, with some success. California has a limit, but it was recently raised, and the Public Utilities Commission is considering how to allow continued growth in local solar once the cap is reached, projected at the end of 2016. New Jersey’s limit is just advisory, which is why there the cap has been exceeded already.

Statewide limits aren’t the only way to regulate the impact of solar or other local energy. In fact, a statewide limit likely has more to do with protecting a utility’s market share than physical grid infrastructure.

In Hawaii, for example, the state-based limits were recently cast off in favor of localized limits reflecting the actual grid impact. A Hawaiian utility’s local power lines (called distribution feeders) will accept new local solar projects until they make up 250% of minimum daytime demand, much higher than the original 15% of peak energy limit.  Solar may still expand after this threshold, but new projects may have to do a (sometimes costly and time-consuming) interconnection study. California has a similar local policy, and other states are likely to follow suit as the impacts of local power generation are felt most keenly at the local level. In some places, these local limits may be adopted in concert with statewide limits.

More states should move toward local-only limits, since the impact of local solar on the grid is generally localized. The limits in California and Hawaii, for example, finally overcame an archaic rule-of-thumb that on-site power generation shouldn’t exceed 15% of peak power demand on a distribution feeder. They’ve replaced this guesswork with evidence-based formulas.

If the fight over solar was just about managing its impact on the grid’s physical infrastructure, that could be the final word. But more often, the battle to expand rooftop and local solar goes far beyond its technical integration to a fight over the economic winners and losers.

Capping net metering is one way utilities can forestall local competition to their own sales, but they’ve adopted a host of strategies to fend off irrelevance. Battles in state legislatures and Public Utilities Commission in over 20 states have been joined over the interconnection of local solar, the value of solar energy to the grid, increasing fixed charges, and fees utilities insist should be assessed on solar energy producers. The map below illustrates the states with these battles. 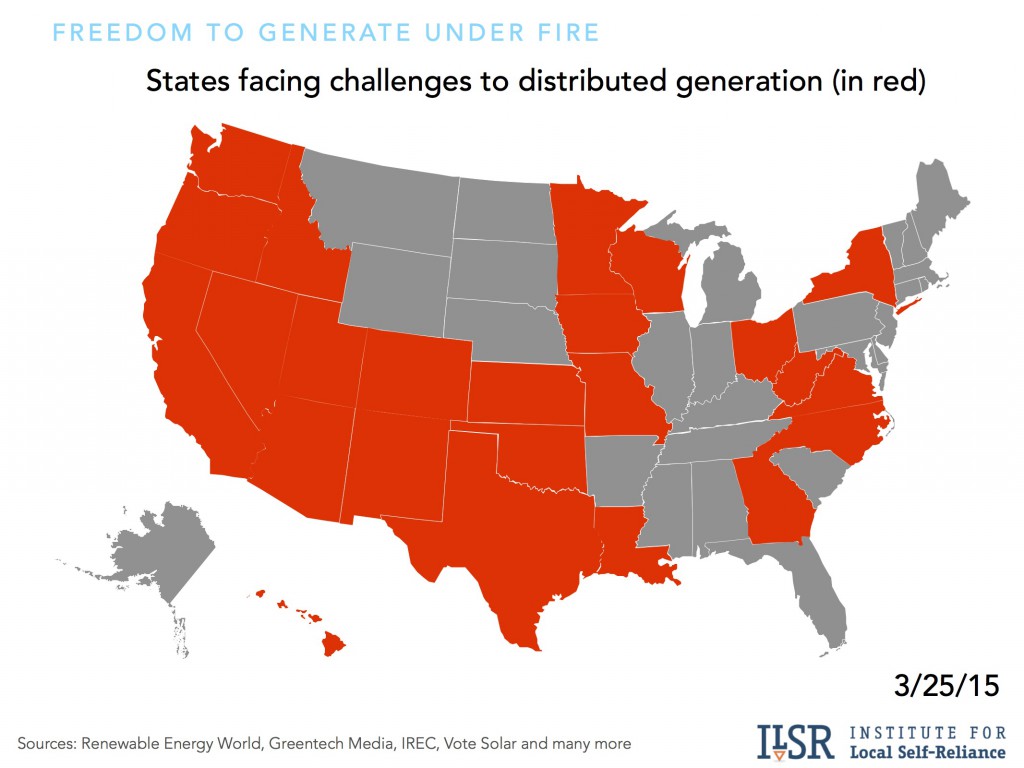 Given the substantial economic benefits of local power generation, states should continue to raise or eliminate caps on net metering and on-site power generation, like in California and Vermont. Technical issues should be addressed with evidence-based policies, like in Hawaii and California. As to utility revenue, that’s a bigger question about the 21st century utility business model. Are we just interested in making a better utility, or unlocking the opportunity of energy democracy?