Gov. Mark Sanford is pulling out all the stops in his bid to block a multi-million dollar subsidy for the huge outdoor retail chain Cabela’s.

In June, Sanford vetoed legislation passed by the South Carolina legislature that gave Cabela’s a 50 percent break on sales and income taxes for a proposed store in North Charleston.

But the legislature overrode Sanford’s veto. Now the governor is calling on independent outfitters in the state to put pressure on their lawmakers.

“We don’t think it makes sense for the any number of family-owned and smaller businesses that have been paying taxes in South Carolina for a long time to now be called on to subsidize a loss in their sales,” Sanford wrote in a letter to three dozen outdoor sporting goods stores. “I would appreciate you making your voice heard if you think this proposal should not stand.”

Sanford has also said he will ask the Coordinating Council for Economic Development, a branch of the Commerce Department that must approve certain parts of the subsidy, to oppose the plan. 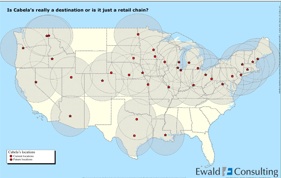 Cabela’s, a long-time catalog retailer of hunting and camping gear, has been building massive stores that feature aquariums, fake indoor mountains, and taxidermy displays. The chain currently has 14 megastores and proposals pending for 22 more.

State and local governments have provided subsidies for nearly all of these stores. A store in Dundee, Michigan, for example, received $40 million in handouts, while officials in West Virginia put up an astounding $98 million for a Cabela’s store and distribution center.

Cabela’s is so dependent on public funding, notes Greg LeRoy, director of Good Jobs First and author of The Great American Jobs Scam, that the company’s 2004 prospectus for investors bluntly warns that, if the public trough runs dry, it could lead “to a decrease in revenues or revenue growth.”

Supporters of the subsidies contend that Cabela’s stores, with their “museum-quality” displays, draw millions of tourists, many from out of state, who pump money into the economy.

But critics, including the advocacy organization Say No to Outdoors Retail Subsidies, point out that Cabela’s has announced plans to build in all 50 states, making its giant stores a ubiquitous feature of the U.S. landscape, rather than a tourist draw.