A Congressional committee spent a year investigating Amazon’s monopoly power. Its findings signal that it’s time for independent businesses to urge Congress to break up Amazon, America’s most dangerous monopoly.

For more information, read the following explainer on what the Congressional committee’s investigation and findings mean for independent businesses?

In 2019, the House Judiciary Committee, through its subcommittee on antitrust, launched an investigation into whether Big Tech companies are using their power to undermine competition and harm smaller businesses. In October 2020, the Committee released its report.

What did the Committee say in its report? 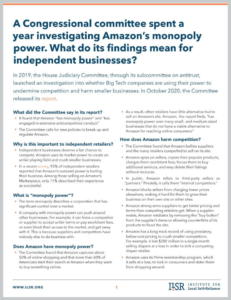 Why is this important to independent retailers?

What is “monopoly power”?

Does Amazon have monopoly power?

How does Amazon harm competition?

What are the antitrust laws? Don’t they prohibit this kind of behavior?

What does the Committee recommend?

What happens if we break up and regulate Amazon as the Committee recommends?

What can you do to help the Committee’s recommendations become law?

See our explainer on Congress’s report.

Mary Timmel is ILSR’s Small Business and Consumer Organizer. She supports and develops the leadership of small businesses and consumers to win policy changes that check Amazon’s outsized power and address rising corporate concentration across the economy.

Mary Timmel is ILSR’s Small Business and Consumer Organizer. She supports and develops the leadership of small businesses and consumers to win policy changes that check Amazon’s outsized power and address rising corporate concentration across the economy.

Small Businesses — Sign our Petition to Break Up Amazon 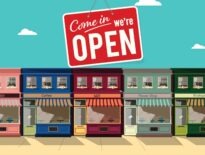 Retail In The Nation, the Left Should Fight for Small Bus… 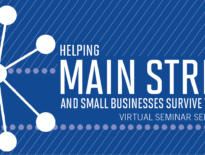 Retail Kennedy Smith talks to Mayors about How to Help Sm…