In 2006, a group of citizens in the coastal region of New Hampshire and southern Maine came together to confront an array of interrelated pressures, including skyrocketing property prices, that threatened to drive out local businesses, artists, and musicians, and, in the process, destroy the area’s unique atmosphere and rich community life.

They formed Seacoast Local, which has since grown into a broad movement of independent businesses, nonprofit organizations, and citizens working together to protect and strengthen the region’s local economy, civic fabric, and distinctive character.

Seacoast Local serves as a network to bridge existing community movements and to promote citizen involvement in local business, agriculture, arts and culture, the environment, and civic life. It covers a region that centers on Portsmouth and stretches from York, Maine, to Hampton, New Hampshire.

The group has focused much of its energy on a Buy Local program, which enlists independent businesses to remind people of the implications of their spending choices and advocate support of the local economy.

“We have a hugely local downtown [in Portsmouth, NH] and we want to continue to cherish that and remind people that they need to make decisions to maintain it,” said Karen Marzloff, co-owner and managing editor of Portsmouth’s weekly newspaper, The Wire, and vice president of Seacoast Local. “However, it can’t be a movement for local businesses. It has to be a movement by local businesses.”

More than 100 businesses have joined the campaign so far. About 75 percent are located in Portsmouth, with the remainder in Kittery, just across the Maine border, and surrounding towns.

Members sport large decals on their storefronts that feature the campaign’s Buy Local logo and identify the business as locally owned and independent (click here to see how Seacoast Local defines those terms). The logo includes an image of the bridge that links Portsmouth and Kittery and serves as a symbolic reference to the role that the organization plays in building connections among a variety of local businesses and nonprofits.

While the campaign shares much in common with similar initiatives around the country, Seacoast Local stands out as an exceptional model in its efforts to highlight the support that local businesses provide nonprofit organizations and to encourage businesses to contribute even more to the community.

In a much-raved-about holiday marketing campaign, Seacoast Local ran a series of print advertisements that each featured a picture of a local business owner with a list of the community groups and nonprofits the business supports. The ads noted, “Studies show that locally owned businesses give up to 250% more to local causes than non-locally owned businesses,” and closed with the tagline, “This holiday season, buy local and change your world.”

The emphasis on support for community causes has inspired local business owners. “Seacoast Local has motivated us to think of things differently,” explained Jodi Breneman, co-owner of G. Willikers, a local toy store that has been serving Portsmouth for 30 years.

Her store now features a monthly “Partners in Play” program in which a nonprofit organization or other local business is showcased in one of the store’s prominent display windows and information about the organization is disseminated to customers. The program is so popular that her window display is booked for months in advance.

In turn, G. Willikers cross-markets with the organizations, featuring its toys at events coordinated with the “Partner in Play” for that month. For example, the April “Partner in Play” was Families First Health and Support Center, a local nonprofit that provides universal health care services to the community. G. Willikers hosted a family fun night at Families First, bringing games and toys for everyone to play with. The store also donated 20 percent of its sales from an after-hours event to the organization.

Other businesses are also stepping up their support of community groups. RiverRun Bookstore donates 2 percent of its sales to affordable housing efforts, so that Portsmouth citizens can continue to live where they work. Local bakery and sandwich shop, Me and Ollies, routinely features local poets and musicians.

Another popular Seacoast Local program is Making the Connections, a speaker series organized in partnership with RiverRun that brings in experts on a wide range of topics related to building the local economy and community.

No other event embodies the group’s message better than the annual Seacoast Local Festival. For the last three summers, Seacoast Local has closed off a block in Market Square in downtown Portsmouth to traffic and set up booths to showcase local nonprofit organizations, businesses, musicians, artists, and food. In addition to talking to the public about the issues they work on, the nonprofits often organize games, which contribute to a carnival-like atmosphere at the festival. 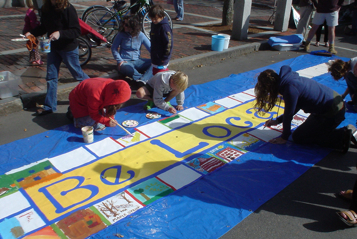 The festival, which draws a few thousand people, is designed to spotlight the importance of each element within the local community and how they interact to create the region’s sense of place and its appeal to both tourists and residents.

One significant benefit of Seacoast Local’s work that its founders did not anticipate is that local businesses are relying more on one another.

“The really overlooked aspect is that we’ve seen the member businesses looking to each other first,” explained Holbrook. As they promote the idea of buying locally to their customers, business owners are turning to other local businesses for more of the goods and services they need.

That has prompted Seacoast Local to focus on diversifying its membership by reaching out to lawyers, financial firms, repair shops, and other service providers.

Seacoast Local hopes to reach 200 members by September when they publish their first local business directory. Annual membership fees start at $150 for businesses and $75 for nonprofits. After numerous requests, they recently added a citizen membership at $35 a year, and, as the number of individual members has grown, so too has the number of people spotted around town sporting Buy Local t-shirts and tote bags.