Two weeks ago, in a public hearing room crowded with more than 100 people, including dozens of local business owners standing alongside environmentalists, affordable housing advocates, and labor leaders, the city council in Santa Rosa, California, soundly defeated a proposed Lowe’s store on a 5-2 vote.

For a city facing a sizable budget shortfall, it was a remarkable decision. The conventional wisdom, especially in California’s sales tax-dependent and financially strapped cities, is that big-box retailers are cash-cows and those cities that do not welcome them with open arms will be left behind in the regional competition for revenue.

Lowe’s pushed the sales tax angle hard as it lobbied city officials. But, in the end, most councilors did not buy it, thanks largely to information and testimony submitted by local business owners, who argued that Lowe’s would not bring in new money, but only siphon revenue away from existing businesses, eliminating jobs and shifting wealth out of the community.

“It was our collective action that demonstrated to the city council that this was not a good project,” said Kelley Rajala of the GoLocal Cooperative, a coalition of local businesses, nonprofit groups, and residents working to localize the region’s economy.

Lowe’s, which already has a store in the town of Cotati, about 8 miles south of Santa Rosa, had planned to situate its second store so as to sandwich in between the two a 63-year-old, family-owned home improvement warehouse store called Friedman’s.

Many local business owners saw the move as a predatory attempt to destroy competition. “The chains use profits from outside the community to overtake the market here. They can operate one store at a loss much longer than I can or Friedman’s can,” said Tom Scott, general manager of Oliver’s Market, an independent grocer and founding member of GoLocal.

“I could imagine Lowe’s having a 5-year plan to close one of its stores after Friedman’s was gone,” he added. “Once you lose Friedman’s, you lose them forever and all you have are chain stores. And the barriers to entry for these home improvement warehouses are huge. It’s not like someone else can come along and just start one up. That’s the relevant public policy question.”

Lowe’s has been campaigning for approval for months. The company sent glossy mailers touting the jobs and tax revenue the store would bring to every household in Santa Rosa, a city of about 160,000 people.

GoLocal responded with a mailer that featured statements from the owners of seven prominent local businesses. “Our message was that city needs to think not just about sales taxes, but about all of the other benefits local businesses bring to the local economy, particularly the local multiplier” explained Rajala.

GoLocal hopes the Lowe’s debate will prompt a county-wide discussion about how to eliminate the destructive “race to the bottom” competition for retail development that often occurs between neighboring cities in California.

“Lowe’s was making the argument that [Santa Rosa] needs a Lowe’s to shift the sales taxes from Cotati. That’s the most insane argument when you think about that in terms of regional planning. It’s not adding to the economy, it’s just getting people to spend at one highway off-ramp instead of another highway off-ramp,” said Scott.

One solution would be regional tax-base sharing, in which sales tax revenue generated from new development would be shared among all of the region’s communities according to their population size. Revenue sharing would likely lead to better regional planning and more rational development patterns.

Santa Rosa is in a good position to start that conversation with its neighbors, according to local blogger Jim Wilkinson, because more than 24 percent of the city’s sales tax revenue comes from non-residents. “It’s wrong to use that number as an argument to beggar thy neighbor rather than to roll it out as a starting point that would put Santa Rosa in the driver’s seat for devising new regional approaches to better cope with California’s malfunctioning local tax structure.”

In the meantime, GoLocal plans to continue providing a platform for businesses to come together. The cooperative will soon be unveiling a rewards card that residents can use at local businesses and is also working to devise new investment vehicles for financing local entrepreneurs. 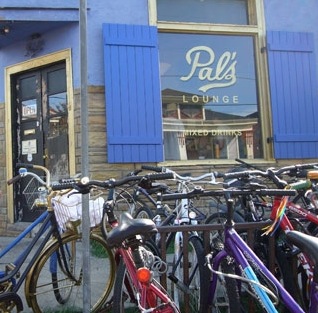