A growing number of states are enacting laws or have existing statutes that enable cities and counties to overcome one of the biggest obstacles to significant investments in renewable energy and energy efficiency—lack of access to long term, low interest financing. And a growing number of cities and counties are taking advantage of this new authority. This new approach is commonly referred to as Property Assessed Clean Energy (PACE) financing and it allows homeowners and businesses to implement dramatic improvements in efficiency and/or renewable energy and repay those investments over a long-term via a special property tax assessment or via a utility bill.

Some cities have, like Babylon, NY, launched programs by tapping into existing revenue streams. Most have made use of amendments to state laws that have allowed them to issue bonds. There have been some stumbling blocks along the way for some programs and ILSR issued a report in May 2010, Municipal Energy Financing: Lessons Learned, that took a look at some of the hurdles and recommended solutions.

However, despite hundreds of cities reportedly being in early stages of investigating or designing PACE financing programs most if not all of them are on hold as of July 2010. The cities are waiting on a resolution of a dispute between state/local governments and the federal housing finance agency (FHFA, e.g. Freddie Mac and Fannie Mae) related to PACE lien seniority and the risk that PACE may have on federally backed mortgages. In August 2010, the good folks at Lawrence Berkeley National Laboratory published a PACE Status Update Report to illuminate the problems and potential solutions surrounding the FHFA’s opposition.

Once the resolution of the FHFA problem occurs, it is likely that PACE financing programs will sweep across the country as more and more states are enabling the policy and the federal government continues to offer program design guidelines and seed money through the energy efficiency and community development block grant program.

As of August 2010, 24 states have adopted new laws or amended existing statutes and codes to allow their counties and cities to establish special assessment districts for energy financing. These amendments have several key features:

In 2008, Vote Solar published an excellent legal memo that examined statutes in 15 states and the amendments that would be needed to establish energy financing districts. 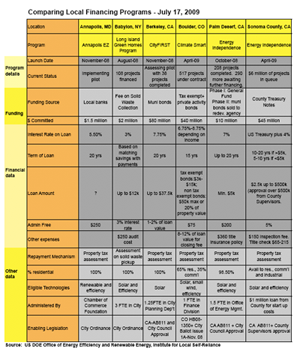 As of June 2010, six cities and counties have established energy financing programs using local public funds. These programs vary significantly, as the table to the right reveals (click for larger version). Some finance only renewables, others only efficiency and still others finance both. Some are restricted to residences while others are open to businesses. Program elements vary (e.g. term of loan, maximum amount of loan, interest rate, etc.) But several features characterize most programs.

Click on a red-shaded state or icon to get details. Shaded states have passed legislation to enable municipal financing based on property taxes.

Colorado's municipal finance law allows for property-tax based public financing of renewable energy and energy efficiency for all cities and counties.

The Louisiana law allows for property-tax based public financing of solar energy and energy efficiency for all "local government subdivisions."

This Maryland law allows municipalities and counties to bond for funds used to finance renewable energy and energy efficiency projects for property owners.

The Ohio law allows municipalities and townships to issue bonds to loan money for PV or solar thermal projects in energy improvement districts.

The Texas law allows municipalities to issue bonds for property-tax based public financing of energy improvements.

This Virginia law allows for property-tax based public financing of "clean energy" and energy efficiency for all cities and counties.

The Wisconsin law allows for property-tax based public financing of residential energy efficiency project for all cities and counties.

In August of 2008, the Long Island town of Babylon, New York approved the Long Island Green Homes (LIGH) program to finance energy efficiency improvements for any of the town’s 65,000 single-family homes to be paid back by the energy savings accrued from the improvements.… Read More

In 2008, California passed legislation to enable every city (and county) in the state to establish voluntary districts for homeowners wanting to fit their homes with renewable energy or make energy efficiency improvements and pay for the improvements with a special assessment on their property taxes.  … Read More

Oregon's municipal finance law allows cities and counties to create "local improvement districts" in order to fund both renewable energy and energy efficiency projects. Cities and counties may bond for funds or borrow small amounts from the Oregon Department of Energy.

In 2008, the City of Palm Desert became the first city in California to pursue public financing of distributed renewable energy and energy efficiency improvements under AB 811.… Read More

In 2008, the Berkeley City Council approved an amendment to the Berkeley Municipal Code (BMC) and created the Special Tax Financing Law. The Special Tax Financing Law is the implementing legislation that allows for the creation of the Sustainable Energy Financing District, by which the City would help property owners finance solar installations and energy efficiency improvements by creating a special tax that is paid through their individual property tax bills.… Read More