A growing number of farmers are selling their products directly to consumers. Expanding local markets for agricultural products connects producers with eaters and increases farmers’ incomes by eliminating the middle person.Food and dollars stay in town, transportation costs are minimized, and a connection between farmers and the community is fostered. Using farmers markets, community supported agriculture, and new state marketing and inspection programs, a new turn towards local markets has begun. As these markets expand, local food systems are being rebuilt to replace the centralized, corporate ones currently in place. Below are the rules and trends that are driving such a transition. 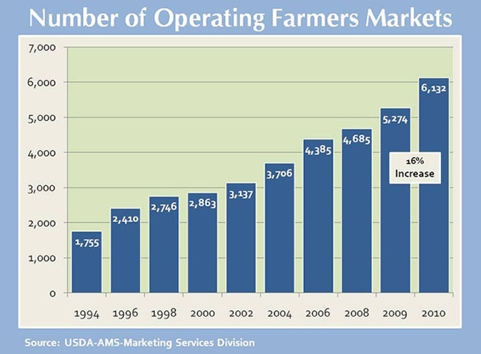 Laws and codes pertaining to farmers’ markets generally provide regulations on locations, hours, and format. The best code (such as the one highlighted below) ensures that farmers’ markets are kept for farmers.

Community supported agriculture (CSA) is a partnership between a farm and a group of local supporters. The supporters each buy a share of the farm’s output at the beginning of the season, providing funds upfront to cover the farm’s anticipated operating costs and the farmer’s salary. In return, they receive a share of the farm’s produce during the growing season. Through this system of mutual support, the farm’s subscribers share in both the risks and rewards of farming, giving farmers a measure of financial security and relieving them of the burden of marketing.

The number of CSAs in the U.S. has been growing rapidly. Local Harvest maintains a comprehensive online directory of CSAs that now includes well over 2,500 farms.

Below we have highlighted several policies that can support local food systems, including federal policies that provide low-income families and seniors with food aid allowances that can be redeemed at local farmers markets, state and local policies that encourage or require public schools and other public agencies to source a portion of their food locally, and state meat inspection programs that enable small-scale, local livestock production.

Community Supported Agriculture(CSA) began in over 30 years ago in Japan - where it is known as"teikei", meaning "putting the farmers' face on food". In the CSA model, citizens buy seasonal shares in a local farm, receiving weekly deliveries of vegetables and other produce. As shareholders, members often form a close relationship with the farmer(s), directly sharing the uncertainties and rewards of the season, often helping with planting and harvesting. Farmers benefit by having a stable, predetermined market to grow for, reduced marketing costs, and financial stability from pre-season "seed money" paid up front. Nearly all CSA's in the US use sustainable, organic methods of cultivation, are small in size, and serve local customers. Lacking supportive laws, CSA's have nonetheless seen tremendous growth in the US and now number over 2,500.… Read More

Prior to 1999, Georgia levied ad valorem taxes for some agricultural commodities, such as fruit and nut trees and livestock. Legislation passed in 1998 relieved small scale farmers of this additional burden. For other crops, such as ornamental trees and shrubs, the possibility of ad valorem taxation was eliminated.

The legislation is noteworthy not because of the tax impact- farmers will save about $ 2.5 million a year, or an average of less than $20,000 per Georgia county- but because it targets those tax cuts to a well defined "family farm" scale agriculture.

Vermont has passed legislation (VT Act 145 of 2006)that tries to strengthen the connection between schools and local farmers and farm products. Although relatively a small program, the training and food processing programs are excellent features to support local food production.… Read More

Farmers' markets are for farmers directly selling what they produce. However, as the markets have proliferated, some retailers have been allowed to set up their own stands to sell produce from out of the state and the country. Some cities such as Dallas, Texas, have set up their code to clearly delimit how a farmers' market is to be organized, and who will be allowed to sell at it. The code keeps the markets true to their name.

The Berkeley School District passed a food policy requiring school cafeterias to serve organic foods to its 9,500 students. The policy explicitly makes a commitment "to increase the amount of products purchased from local farms". To fund the initiative, a portion of the$650,000 the district currently spends on cafeteria food is allocated for local organic food. Organizers have also sought bulk discounts from growers and manufacturers. In addition, school sponsored gardens are expected to provide a significant percentage of the necessary food.… Read More

Colleges and Universities, especially the nation's land grant universities are a perfect laboratory for policies that support locally-grown and/or organic food supplies. The University of Wisconsin's Center for Integrated Agricultural Systems completed a survey of schools in 1998 and identified a handful that had policies in place that supplied their food service departments with significant quantities of locally grown and/or organic food.… Read More

In 1967, the Wholesome Meat Inspection Act and the Wholesome Poultry Products Act authorized states with inspection programs certified by the U.S. Department of Agriculture (USDA) as "at least equal to" the federal program to inspect meat and poultry products for distribution within a state's borders. An adversarial relationship between state programs and the USDA and little interest in direct marketing caused many of the programs to be dropped. Today, meat producers interests in niche markets and marketing have resulted in 25 state meat inspection programs being reinstated and expanded across the country.… Read More

This program allows recipients of the Special Supplemental Nutrition Program for Women, Infants and Children (WIC) to receive part of their supplemental food aid in the form of coupons that can be redeemed at local farms and farmers markets. In 2009, about 2.2 million recipients received farmers' market benefits. Coupons redeemed through the FMNP resulted in over $20 million in revenue for farmers in 2009. More than 17,000 farms, 3,600 farmers markets, and 2,600 roadside stands are authorized to accept WIC FMNP coupons.… Read More