Organics like food scraps and yard debris make up the single largest segment (29%) of Vermont’s residential waste stream, according to a 2018 study. With only one active landfill serving the entire state, Vermont’s need to reduce the amount of its disposed organic waste is quite evident. As such, it has aggressively embarked on a first-of-its-kind, statewide parallel collection program of all mandated recyclable materials, including yard debris and food residuals. By taking a phased-in, but all-encompassing approach, the state aims to have all Vermont citizens diverting food scraps and other organics from landfill disposal by 2020, with all haulers and solid waste management facilities providing services for these materials.

Act 148, the bill that created Vermont’s Universal Recycling (UR) law, was passed by Vermont’s General Assembly on May 16, 2012, to update Vermont’s Waste Management Statutes. Although the UR law went into effect July 1, 2012, the food diversion component of the UR law (as outlined in 10 V.S.A § 6605k) was scheduled to take effect July 1, 2014. The law was amended in 2018 to ban food waste from landfills starting July 2020, and again in 2019 to prohibit the use of single-use plastics.

While Vermont’s Agency of Natural Resources (ANR) is responsible for overseeing statewide implementation of the UR law, municipalities are responsible for the management and regulation of the storage, collection, processing, and disposal of solid wastes within their jurisdiction. More information, including guidance materials, studies, and reports can be found on ANR’s Solid Waste website.

Food scrap generators include any “person whose acts or processes produce…food residuals” at the rates listed below, with these parties subject to abiding the following implementation dates:

Generators are affected by the ban if they are located within 20 miles of a certified organics recycling facility, but only if the facility has available capacity and is willing to accept such source-separated organic material. According to ANR, the intent of this distance-to-services radius is to encourage the development and expansion of infrastructure and to allow time for haulers to modify their vehicles so that they might collect the material stream with the same convenience as they do trash.

Vermont’s Universal Recycling Law is much more comprehensive than a comparatively more simple disposal ban. According to ANR, the law:

Universal Recycling Law Timeline
Before individual material streams (i.e. recyclables and organics residuals) are banned from landfill disposal, there are preceding requirements of solid waste facilities and haulers to provide services for the collection of these material streams. Statewide source-separation, collection of, and ban from, landfills will be phased-in as follows:

Food Residual Management Hierarchy
Food residuals will be managed according to the following order of priority uses, listed in order of highest to lowest priority: 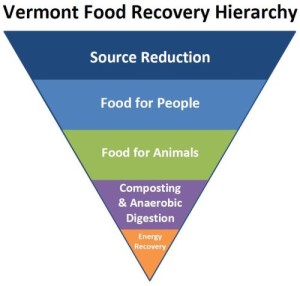 Enforcement of Banned Materials
The landfill disposal ban language in place for toxic and difficult to manage materials extends to mandated recyclables, leaf and yard debris, and food scraps under the UR law. As the landfill ban language indicates, there is no de minimis amount of landfill banned material permitted. The UR law indicates that no person shall knowingly dispose of the banned items in solid waste or landfills.

Collection Costs
According to ANR the requirements to offer collection of recyclables and organic residuals by haulers and facilities encourages residents to divert their materials with the clause that recycling must be offered with no separate line item charge. This has the effect of the hauler providing residential trash and recycling as a bundled service. ANR’s parallel collection factsheet provides additional guidance.

The following definitions are presented as they appear in the Universal Recycling law:

“Leaf and yard residual” means source separated, compostable untreated vegetative matter, including grass clipping, leaves, kraft paper bags, and brush, which is free from noncompostable materials. It does not include such materials as pre- and post consumer food residuals, food processing residuals, or soiled paper.

“Food residual” means source separated and uncontaminated material that is derived from processing or discarding of food and that is recyclable, in a manner consistent with section 6605k of this title (see the Food Residual Management Hierarchy). Food residual may include preconsumer and postconsumer food scraps. “Food residual” does not mean meat and meat-related products when the food residuals are composted by a resident on site.

In 2019, an amendment to the UR law stipulates that the use of single-use plastic items is prohibited, effective July 1, 2020:

i. single-use paper bags can be offered at the point of sale if the customer is charged a minimum of 10 cents per bag, which retailers keep. Smaller paper bags are exempt.

b. plastic straws (except that they can be given upon request of the customer),

c. plastic stirrers for beverages, and

ANR commissioned a thorough cost and implementation Systems Analysis of the expected impact that UR law will have on solid waste management in Vermont. The resulting 141 page report provides what will be, no doubt, helpful to any state implementing a disposal ban–even if it is nowhere near as comprehensive as Vermont’s Universal Recycling Law. Below are some of the key cost analysis findings:

Key Areas for Cost Reduction
The following system changes reflect suggestions by the independent contractors that conducted the Systems Analysis:

Parallel Collection – The UR law requires statewide parallel collection of recyclables, refuse, leaf and yard residuals and food residuals at curbside and at all solid waste collection facilities.

Variable Rate Pricing – This refers to a fee structure that reflects disposal services that are charged on a per weight or per volume unit with price setting to incentivize recycling and composting. Also known as “Unit Based Pricing” or “Pay-as-You-Throw,” this structure has been in place in municipalities throughout the United States for decades. The intention of a PAYT structure is to encourage households and businesses to recycle instead of disposing of recyclables by making trash disposal more expensive, with the cost of recycling embedded in the cost of trash collection. Guidance materials for implementing Variable Rate Pricing can be found on ANR’s website.

Outreach and Educational Resources – According to ANR, since the adoption of the UR law, ANR’s Solid Waste Management Program has:

Due to the gradual applicability of organic waste diversion to food scrap generators, as of 2016 it is still too early to see the full impact of Vermont’s food recovery policies. Nonetheless, in a March 2016 conversation with Vermont’s Dept. of Environmental Conservation, analysts reported that all towns have adopted ordinances requiring haulers and facilities to use “pay as you throw” pricing structures. This has resulted in some towns’ trash volumes being reduced by half (e.g. Vernon, Newark, Canaan), and some recycling rates increasing by almost 50% (e.g. Vernon). Notably, the largest solid waste district (by populace) in the state, Chittenden, has reported a 10 to 15% increase in food waste each year since Vermont’s UR passed in 2012.

The ban on disposal of food waste in landfills, which took effect on July 1, 2020, Vermont has seen a surge in composting activities. The Vermont DEC estimated that the number of food scrap haulers has tripled from 12 haulers in 2012, to 45 haulers in 2021. In addition, sales of home-composting supplies and equipment have skyrocketed, jumping from $7k to almost $20k in the past year alone. Experts expect to see the market for composting adjust prices accordingly to be lower than landfill fees, enabling more people to afford curbside collection service.

ANR further expects the UR law to: