In June 2014, Rhode Island’s state legislature amended its Refuse Disposal laws (Chapter 23-18.9), passing a food waste ban to take effect on January 1, 2016. This was done with the goal of prolonging the lifespan of the state’s central landfill, as well as the desire to foster a greener local economy based on harnessing the waste for biogas generation or valuable soil amendment.[1] In fact, in 2015 a waste characterization study prepared for the Rhode Island Resource Recovery Corporation (RIRRC), consultants estimated that 165,100 tons (16 percent of tonnage accepted) could be diverted from the RIRRC Landfill through composting or anaerobic digestion.[2] 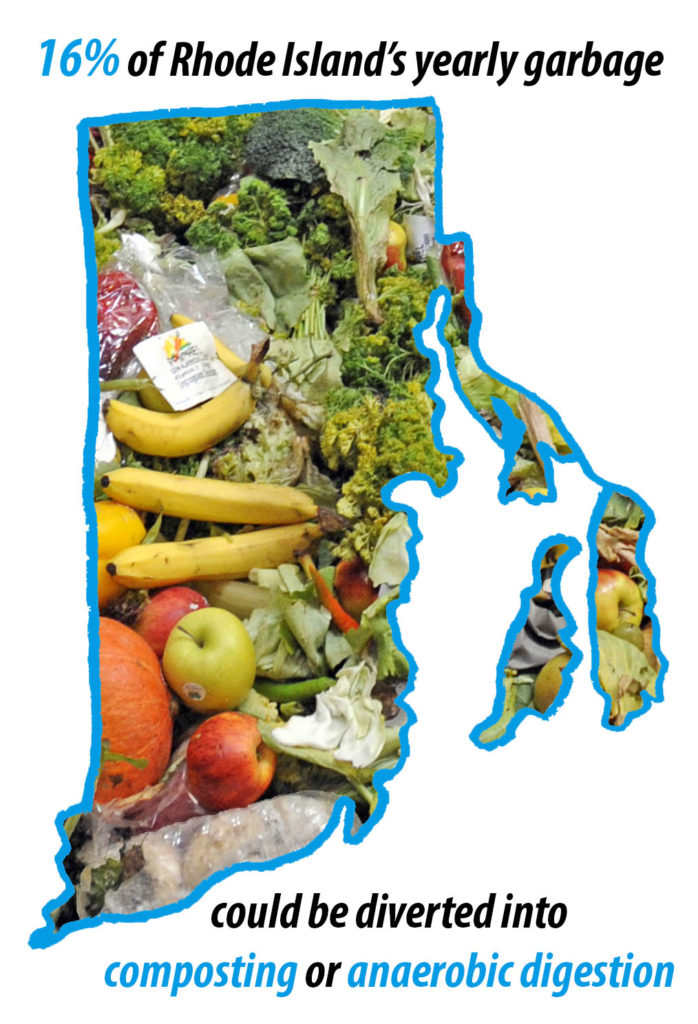 Food waste generators are exempt from recycling their materials if there is no composting or anaerobic digestion facility within 15 miles of the institution’s location. In addition, generators are exempt if an existing facility with 15 miles lacks the capacity to accept their materials. Institutions are also free to compost their organic waste on-site with their own equipment.

Notably, Rhode Island’s food waste ban contains a distinctive clause. Under subsection (b) of the food waste ban, a waiver may be requested by the institution if the tipping fees of the compost or AD facility within the institution’s fifteen mile radius would cost the institution more than the price of having the waste taken by the RI Resource Recovery Corporation at its going rate for non-contract commercial waste. For fiscal year 2021, the tipping fee at RIRRC for commercial, non-contract waste is $115 per ton.

(15) “Organic waste material” means the organic material portion of the solid waste stream, including, but not limited to, food scraps, food processing residue, and soiled or unrecyclable paper that has been separated from nonorganic material.
(16) “Composting facility” means land, appurtenances, structures, or equipment where organic materials originating from another process or location that have been separated at the point or source of generation from nonorganic material are recovered using a process of accelerated biological decomposition of organic material under controlled aerobic conditions.
(17) “Anaerobic digestion facility” means a facility employing a closed vessel to perform a closed process of accelerated biodegradation of organic materials and/or organic solid wastes into biogas and digestate, using microorganisms under controlled conditions in the absence of oxygen.
(18) “Other authorized recycling method” means:

(ii) Diverting organic waste material for agricultural use, including consumption by animals.

(1) The covered entity or covered educational facility generates not less than one hundred four (104) tons per year of organic waste material; and

(2) The covered entity or covered educational facility is located not more than fifteen (15) miles from an authorized composting facility or anaerobic digestion facility with available capacity to accept such material.

(b) A covered entity or covered educational institution may petition the department for a waiver of the requirements of subsection (a) of this section if the tipping fee charged by the Rhode Island resource recovery corporation for non-contract commercial sector waste is less than the fee charged by each composting facility or anaerobic digestion facility located within fifteen (15) miles of the covered entity’s location.