As the country’s most populous city, New York City (NYC) experiences a unique set of challenges when it comes to managing its waste stream. Generating 1.8 million tons of commercial and residential organic waste yearly, NYC is making efforts to face this waste diversion problem head-on.

In 2013, then-mayor Michael Bloomberg committed to doubling the organics recycling rate by 2017. In December 2013, NYC passed its Commercial Organic Waste law (Local Law 146), mandating specific large-scale generators to arrange for the recycling of their organic materials or employ department-approved methods to process the material themselves. However, according to a 2017 Mayor’s Management Report, organics recycling had only grown from a 15.1% capture rate in 2013 to 17.4% in 2017. And, despite pledges by Bill De Blasio (NYC’s mayor from 2013-2021) to expand organics collection to the entire city by 2018, only 3.3 million out of 8.4 million NYC residents had access to curbside organics collection in that year.

The curbside collection service had expanded to serving 3.5 million residents before the program was put on hold due to COVID-19. The city has since recommitted to its curbside organics collection service as well as sending zero waste to landfills by 2030.

The 2012 waste characterization study estimated that organic waste composes about one-third of NYC’s commercial waste stream (and updated figures from 2017 estimate a 34% share of organics suitable for composting). Seeing the opportunity to significantly reduce the volume of NYC’s waste stream, the City Council passed its 2013 commercial organic waste law (Local Law 146, now codified as §16-306.1). The new law used the same definition for organic waste as found in §16-303 of the New York City Administrative Code, with the exception that organic waste to be recovered is not “food that is donated to a third party, food that is sold to farmers for feedstock, and meat by-products that are sold to a rendering company.”

Organic waste is defined in the New York City Administrative Code as follows:

““Organic waste” means any material found in the waste stream that can be broken down into, or otherwise become part of, usable compost, such as food scraps, soiled paper, and plant trimmings. As determined by the commissioner, such term may also include disposable plastic food service ware and bags that meet the ASTM International standard specifications for compostable plastics, but shall not include liquids and textiles.” 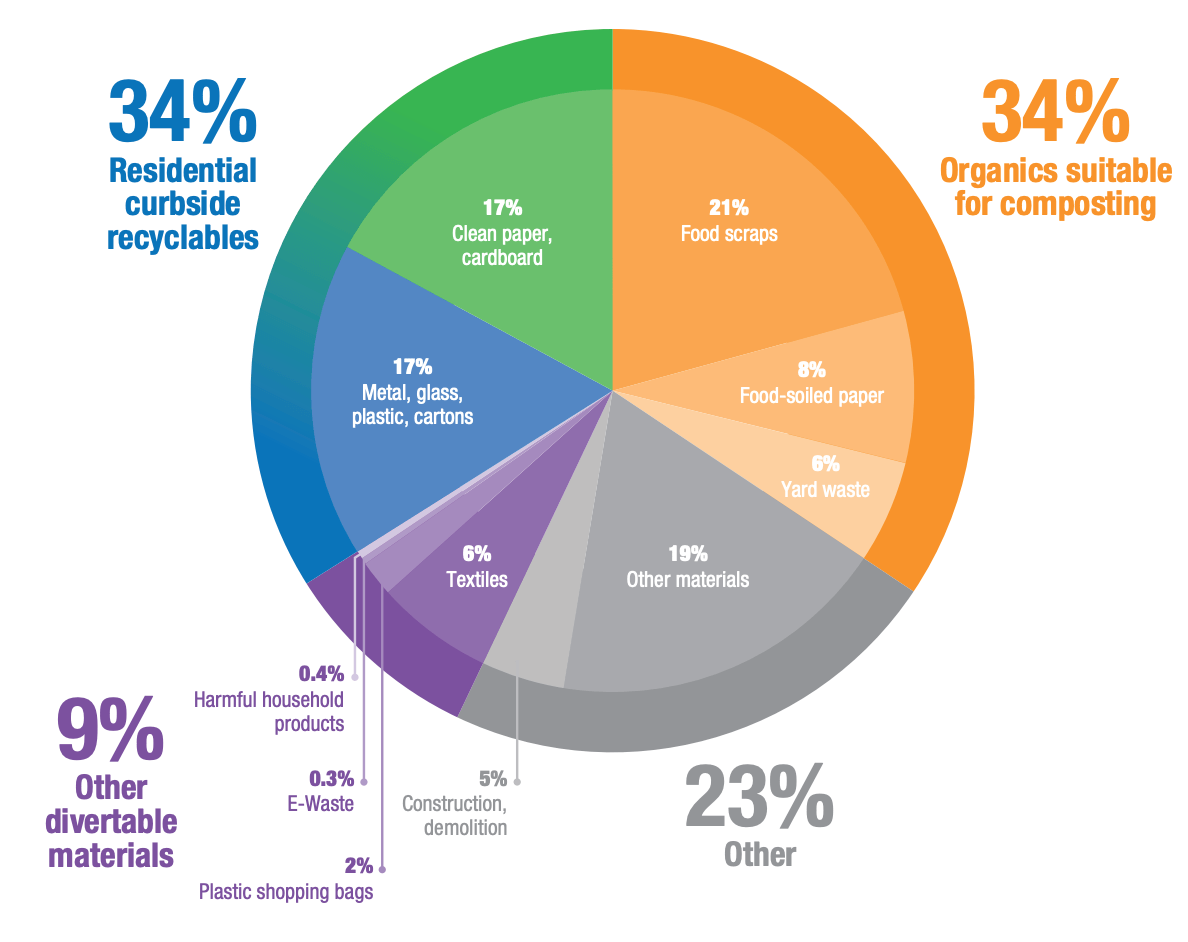 As of July 31, 2020, the organic waste generators falling under the category of “Establishments covered by Commercial Organics Rules” are the following:

Note: all references to square feet refer to floor area

Each designated “covered establishment” entity will be required to arrange for one of the following options:

1) Ensure collection by a private carter of all source-separated organic waste generated for composting, aerobic or anaerobic digestion, or other department approved processing methods

2) Transport their own organic waste to a facility for composting, aerobic or anaerobic digestion, or other department approved processing methods

In conjunction with these options, establishments are required to:

Under normal circumstances, violations to the Commercial Organics Law are liable for a civil penalty that may amount to $250-$1,000 per violation after a 12-month warning period. However, due to the impacts of COVID-19, DSNY has extended the warning period for establishments, transfer stations, and private carters covered by the updated legislation that took effect July 31, 2021, thus no penalties will be issued until July 31, 2022.

In March 2020, The NYC City Council released a policy paper on adaptation and mitigation strategies for NYC in the face of Climate Change, which reported that 80% of residential waste still ends up in landfills, despite the City’s commitment to sending zero waste to landfills by 2030. It calls for a comprehensive plan for waste diversion, including an organics recycling mandate.

In February 2021, the NYC Mayor’s Office released the City’s first-ever 10-year food policy plan called Food Forward NYC, in accordance with NYC’s food equity agenda. This food policy plan sets the goal of 90% collection of organic waste by 2030 with mandated source-separation of organics by 2050 for city institutions and schools, and by 2029 for all residential buildings. Additionally, it calls for engagement with environmental justice advocates and the design community to bolster new and existing infrastructure and procedures to support sanitary and equitable composting and source-separation practices.