A 2015 waste characterization study of Connecticut’s waste stream found that food scraps make up 22.3% of the state’s disposed solid waste. In fact, the percentage of compostable materials found in the state’s annual contribution to landfills increases to 37.3% with the inclusion of compostable paper and yard trimmings, which make up 10.7% and 4.3% of the waste stream, respectively.[1]  An earlier waste characterization study conducted in 2010 prompted Connecticut to enact a recycling mandate for certain organic materials, which came into effect on January 1, 2014.

In fact, Connecticut became the first state to mandate food scraps generated by large-scale generators be recycled when it passed Public Act 11-217 in 2011. The law was updated and expanded in 2013 by Public Act 13-285. These two bills constitute the whole of the organic recycling mandate and amend Section 22a-226e of Connecticut’s Solid Waste Management Statute. Connecticut’s Department of Energy and Environmental Protection (DEEP) is the regulatory body responsible for enforcing the mandate. CT DEEP provides information on all associated laws, regulations, permitting requirements, and general information about composting on their website.

Connecticut already had a number of composting facilities due to existing mandatory leaf and grass trimmings recycling programs. According to Diane Duva, a former Assistant Director of the Waste Engineering and Enforcement Division at CT DEEP, there were three key steps in setting the stage for Connecticut’s organics recycling mandate.[2]

Step 1: Connecticut created a GIS-based map and database of the state’s large-scale food scrap generators to demonstrate that there would be sufficient volume to sustain full-scale processing facilities and map the location of generators that could potentially supply those facilities with feedstock. 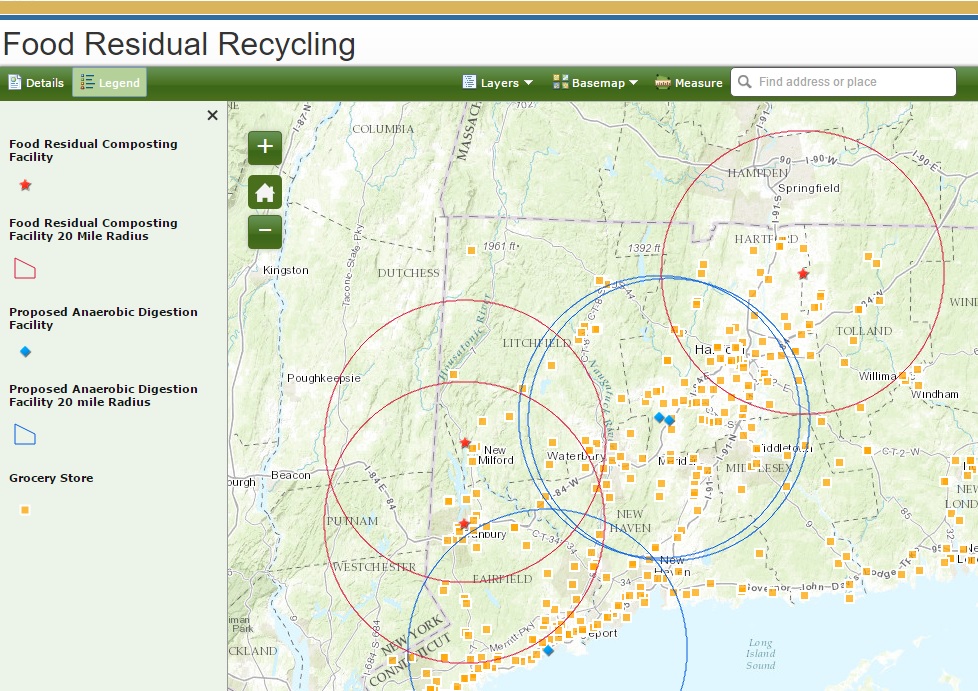 Step 2: Connecticut conducted a state-wide waste characterization study to determine the weight, type, and generator sector of food scraps being disposed of in the state. The 2010 study found that:

Step 4: In 2016, the Solid Waste Management Plan was revised to produce the Comprehensive Materials Management Strategy (CMMS) as a roadmap to achieve the state’s goal of 60% diversion of materials from disposal by 2024. The Strategy prioritizes composting as a key waste diversion tool, in addition to source reduction, reuse, recycling, and new waste conversion processes.

Connecticut’s General Statutes pertaining to Solid Waste Management (Chapter 446d) define source-separated organic material as “organic material, including, but not limited to, food scraps, food processing residue and soiled or unrecyclable paper that has been separated at the point or source of generation from nonorganic material.”

Permitted composting facilities that receive these source-separated organic materials are required to report a summary of fees charged for the materials to the Commissioner of Energy and Environmental Protection as a part of their reporting responsibilities.

Generators are affected by the mandate if they are located within 20 miles of an authorized source-separated organic material composting facility, but only if the facility has available capacity and is willing to accept such material. The CT DEEP encourages—though does not at this time require—institutions such as schools, universities, and prisons to recycle food scraps, due to anticipated disposal cost savings. They also encourage the prioritization of food waste reduction and recovery over food scrap recycling.

CT DEEP expects the mandate will have a positive impact in several environmental and economic areas, for example: