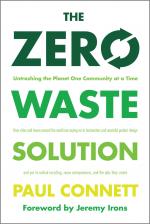 A Review of The Zero Waste Solution: Untrashing the Planet One Community At a Time
(By Paul Connett, published by Chelsea Green Publishing)

Neil Seldman is President and co-founder of the Institute for Local Self-Reliance (ILSR). He is a specialist in recycling and the history of ideas. He is co-founder of the National Recycling Coalition, 1980, Grass Roots Recycling Network, 1995 and Zero Waste International Association, 2003. Seldman wrote the “Introduction” to the International Zero Waste Dialogue, Anthony and Liss, Editors, Grass Roots Recycling Network, 2000.

Disclosure: Neil Seldman and Paul Connett have worked together for over 25 years fighting against waste incineration and for total recycling and economic development, or zero waste, in the US and UK. The book under review includes discussion of Neil Seldman’s and ILSR’s ideas and work.

Paul Connett’s newly released book displays his personal charisma, scientific knowledge and applied wisdom to the deadly serious, though mundane, world of waste. It is a book worthy of the man who Richard V. Anthony, president of the Zero Waste International Association, refers to as the ‘rock star’ of the anti-incineration, pro zero waste movement.

Indeed, Professor Connett’s lectures are scientific tarantellas of facts, consequences, warnings and solutions, accompanied by charts, tables and slides that lay out the biological and chemical realities of wasting and poor management of residuals. They are also wonderfully entertaining, generating more than one side splitting laugh at his metaphors, similes and profound aphorisms — the Devil Burns, God Recycles, Make Love Not Waste, and for older folks, Make Friends Not Waste. The lectures end with a most spirited rendition, lead by Connett, of “No Incineration Forever”, with words set to the tune of “Battle Hymn of the Republic.” Audiences clamor for more.

What a boon to the US and international zero waste movement! This is one super star who charges no money for his participation in thousands of grass roots events over the decades.

Connett is a retired chemistry professor who currently works on fluoridation issues, while still maintaining a heavy schedule of anti wasting speeches and workshops. He initiated and coordinated the Citizens Dioxin Conferences and produced the videos Zero Waste: Idealistic Dream or Realistic Goal? and Road to Zero Waste in the l990s[1]. Most recently, Connett has worked with Rossano Ercolini, a former schoolteacher and winner of the 2013 Goldman for Excellence in Protecting the Environment in Europe for his anti incineration in Italy.

Connett, a native of the UK, fits in well with the US tradition of citizen scientists Rachel Carson and Barry Commoner who used their scientific skills for grass roots rather than corporate or bureaucratic interests. These environmental and scientific heroes strive to apply the benefits of scientific knowledge for the common good, the ideal form of science hailed in Rousseau’s First Discourse on the Arts and Sciences, those that make for a better and happier world.

The text is grounded in Connett’s optimistic belief that there can be a world where local decision making counts. Garbage is just the tip of the iceberg. Wasting is a paradigm that encompasses energy, jobs and small businesses, climate change, toxicity, the fate of the oceans. The solutions to wasting open up a world of renewed possibilities for the human race and nature.

Nothing if not specific, Zero Waste educates us about the Five Rs (Recycle, Reuse/Compost, Redesign, Reduce, Responsibility) and the Four Cs (Common Sense, Community, Creativity, Children). These simple, yet profound, concepts and practices are critical for sustained resource management and broad prosperity. Zero waste is not one big solution for waste management, a large incinerator or mega landfill. Rather the solutions are small scale, locally owned and environmental sound. These policies, programs and enterprises are ‘pieces of zero waste’ that have spontaneously emerged in every part of the globe, the instinctual human response to the bourgeoning and threatening waste stream.

Zero Waste identifies the needs for citizen and small business organizing and solidarity as the necessary socio-political context for zero waste technologies, policies and businesses to thrive. With localism and citizen participation at every stage of development, zero waste is a pathway to a stable, steady state economy as envisioned by previous economic visionaries John Stewart Mill, Frederick Engels, Kenneth Boulding and Herman Daly.

Zero Waste also includes the stories of US and world grass roots leaders who have shaped the new paradigm in resource management and made it possible for business people and residents to say no to incinerators and landfills that destroy resources and pollute. There are essays written by leading activists and thinkers in the zero waste movement:  Eric Lombardi links the practicalities of zero waste to world peace, Dan Knapp and Mary Lou Van Deventer, pioneers in reuse entrepreneurialism, the leading theoreticians of the US total recycling and zero waste movement, Jeffrey Morris a leading zero waste economic analyst, Buddy Boyd a recycling practitioner who discusses the need for political leadership, Richard V. Anthony and Gary Liss describe zero waste efforts in the private sector. I have an essay linking recycling to resilient communities and cities.

The book’s publication took two years.. Yet, even as the essays contain older information, they are quite useful. They need updating in some places as ideas and projects around the world have grown and new issues emerged. The sections on Extended Producer Responsibility (EPR) as they stand are inadequate. They are not informed by the latest push back against the rigid, ideological, EPR Formula and Framework that have resulted in zero waste dystopias in British Columbia, Canada and Europe where Extended Producer Responsibility has been diverted from core values of zero waste including small scale, local ownership entrepreneurialism, anti monopoly and anti incineration. Most pertinent are the recent policy statements that place EPR under local government rather than industry control, the Zero Waste Commission, Berkeley, CA, and the Global Recycling Council of the California Resource Recovery Association, the dialogue within local and national Sierra Club chapters and committees, and the Grass Roots Recycling Network.  Connett addresses these inconsistent policies, but EPR deserves more sophisticated essays on its own. Recyclers and cities are not willing to turn over their cities, companies and industries to the concentrated corporations that produce wasting in the first place.

The history section could use more details from the pre-1985 period. During the late 1960s and l970s and early l980s, the infrastructure of the post World War II recycling movement was rebuilt on the remaining paper and metal scrap industries by private consulting firms (SRD and SCS Engineers), dozens of community based recycling companies (Santa Rosa Community Recycling, EcoCycle in Boulder, Ann Arbor Ecology Center) and regional anti toxics groups (Western Washington Anti Toxics Coalition, Concerned Citizens of South Central Los Angeles, ReClaim, Springfield, MO), and direct technical assistance groups (ILSR, NYPIRG, BioCycle). It was this groundswell of activism that finally, by 1985, caught the attention of the national environmental organizations, which then formed their own response to garbage and wasting.

Finally, I disagree with an assessment cited to the effect that the current challenge posed by the incinerator industry is greater than in previous decades (1970-1995) and that the industry is now better organized. The current number of proposed incinerators is half of that in previous decades. The current grass roots institutions that have emerged and proved their mettle as a firewall against mass propaganda for technological fixes, false science, financial patronage and a government-industry revolving door still serve every corner of the country. Years ago these local and regional organizations had to pull themselves together as they fought off incinerators, which benefited from far more comprehensive government support and subsidies than today. The anti incineration movement is as vibrant and diversified today as it was yesteryear when 300 planned incinerators were defeated.

These shortcomings are minor compared to the enormous value of this book. Zero Waste will contribute greatly to the public discussion of waste. It will become a standard text for students of all ages. No longer can business and government leaders ‘sleepwalk’ through an era of “socially sanctioned wasting that characterized the Twentieth Century.”[2]

In my last book review, Garbology: Our Dirty Love Affair with Trash [3], I praised its lively description of the social history of wasting in the US economy. Zero Waste by Paul Connett complements this history. It is required reading for those who seek to understand the recycling phenomenon and avoid the economic and environmental pain that will certainly follow if zero waste is not introduced immediately throughout the world.

One further recommendation, after reading Zero Waste, watch the movie “Trashed: No Place for Waste,” which features Dr. Connett.[4]

Review: The Zero Waste Solution: Untrashing the Planet One Community At a Time