Can residential rooftop solar compete with new utility-scale concentrating solar electric plants? Only if federal and state incentives are amended to level the playing field. This May 2008 report explores the economics of solar PV and concentrating solar and shows how local ownership is hindered unless government solar incentives change.

John Farrell, the report’s author, calls for Congress to change federal tax incentives to give equal benefits to residential solar arrays, instead of favoring commercial and centralized projects.

"Decentralized solar arrays avoid the cost and hassle of building new high voltage transmission lines", says Farrell. "They also enable local ownership, which should be a goal of public policy."

Concentrating solar power plants work more like conventional power plants than solar photovoltaic panels. They use large arrays of mirrors to focus sunlight for heat, using the heat to create steam and generate electricity. These plants, mostly built in the deserts of the American Southwest, must send their power over long-distance transmission lines and are much larger than the rooftop solar panels that were previously the dominant form of solar power production.

The size of concentrating solar plants precludes local ownership, a benefit that renewable energy policy must factor in. "Ownership converts citizens into energy producers, which in turn gives them a personal stake in expanding the use of renewable energy," notes Farrell. "It also encourages them to maximize energy efficiency, because the greater the efficiency the more independent they become, perhaps even becoming a net exporter of electricity." 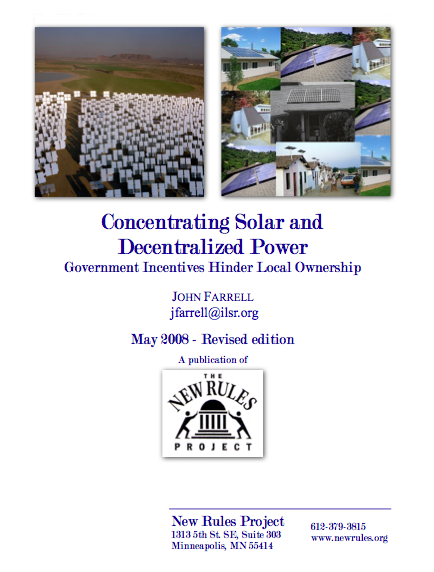