A serialized version of our new report, Democratizing the Electricity System, Part 4 of 5.

Despite technology’s march toward more efficient and distributed energy production, there’s a substantial tension between the decentralized opportunity and the institutional and policy inertia generated from a century dominated by the paradigm of centralized generation.  Motivated by the urgency of global climate change, many renewable energy advocates hope to transform the electricity grid by building ever-larger wind farms and solar power projects in remote regions, and sending power across the super grid to cities.   These competing visions for the grid will compete for limited resources for clean energy development.

The tension between decentralized and centralized is most clearly seen in the battles over the construction of a new high voltage transmission network.  In 2005 Congress gave the Department of Energy and the Federal Energy Regulatory Commission (FERC) new authority to accelerate the construction of this network. The new law allowed FERC to approve a new transmission line if the state utility commission had not done so in one year after submission of the request.  FERC then asserted its authority to overrule states that disapproved of the request for a new transmission line.  The federal courts twice ruled that FERC did not have this authority.

States have actively expressed their opposition to being forced to pay for a new transmission infrastructure that assumes they will be importers rather than generators of renewable energy.  Ten East Coast governors signed a letter to Congress in 2009 asking them to reconsider proposed legislation pre-empting state authority over new transmission.[1]  Editorials in the Detroit Free Press in 2011 decry the cost to Michigan ratepayers of expanding high-voltage transmission that largely uses Michigan as a waypoint between windy points West and big cities to the East.[2]

The existing electricity system – and the rules that govern it – privilege money and power,  and punishes people and communities of the 21st century paradigm.

The vision of a distributed electricity system requires designing policies that can overcome a number of roadblocks.

There is an inherent tension between federal and state and local energy regulatory agencies.  FERC sees its primary goal as accelerating and enabling the long distance transmission of electricity while in the era of renewable energy many states see their primary goal as maximizing in-state production of energy and the economic benefits that derive from that.

FERC has asserted that it has preemptive powers to impose new, high-voltage transmission lines on recalcitrant states (so far denied by the courts).  The claim came from a section of the 2005 Energy Policy Act that gave FERC the authority to approve transmission lines in Department of Energy designated “National Interest Electric Transmission Corridors” if states did not act on proposals within one year.  FERC took this to mean that it could approve any transmission line, even one that a state had rejected.  The 4th Circuit Court of Appeals disagreed in February 2009, ruling that FERC had overstepped its authority.[3]

FERC has also encouraged a shift in the locus of transmission planning from local and state, to regional and national bodies.

FERC has also undermined state’s ability to establish premium prices for renewables in order to accelerate and maximize their use.   In particular, FERC has prohibited states from setting prices above the utility’s avoided cost – the price the utility says it must pay to get an additional kilowatt-hour of power – generally too low to attract investment in all but the least expensive renewable energy sources.  FERC did recently open a loophole in its denial but it remains to be seen whether states are going to be able to do what they want within that narrow wiggle room.[4]

FERC provides a higher, guaranteed return on investment for high voltage transmission lines than are provided for power plants or lower voltage lines.  While the 2005 Energy Policy Act authorized a higher return under exceptional circumstances, FERC has generally extended substantial incentives to every transmission project, with little consideration for the specific benefits the projects bring to ratepayers.[5]

FERC’s insistence in shifting decisions up the food chain undermines the least cost planning processes that have been painstakingly put in place over the last 30 years in many states.  States are usually required to analyze alternatives (e.g. efficiency, renewables, distributed generation) to new power plants or transmission lines.  FERC has been insistent that neither it nor the regional transmission planning authorities are required to analyze alternatives while at the same time insisting that FERC can overrule state decisions regarding transmission lines.

The use of tax credits for incentives eliminates any non-taxable entity from access to the incentive, including municipal or county governments, tribal entities, non-profit organizations, and cooperatives.  In the case of wind power, the limitations on access are particularly profound because each investor in a wind project must either have “passive income” to apply the credit against or be materially involved in the day-to-day operation of the project.  This limitation is particularly onerous for wind projects with many owners, such as cooperatively- or community-owned projects.[6]

For solar, the use of tax credits is particularly onerous for homeowners.  As many as half of American households do not have sufficient tax liability to absorb the federal solar tax credit before it expires.[7]  These households could go solar, but only at a higher price than those who can use the credit.  In other words, those with money and income can go solar, while the rest of us stay in the “dark” ages.

In addition to limiting participation in renewable energy development, the federal tax incentives also make renewable energy more expensive than alternative incentive strategies.[8]  Providing incentives through the tax code forces project developers to partner with “tax equity investors” such as large investment banks.  These banks want a return on their investment, so they add cost to the project, costs that are passed on to ratepayers (and also come out of the pockets of taxpayers).  Additionally, the number of such tax equity investors is limited, both constricting the total market and allowing them to set their own price.  A recent study found that a cash grant (as was enacted as part of the federal economic stimulus package) could provide the same impact on project finances at half the cost to the government and taxpayers.[9]

Tax credits have also provided an opportunity for financing hijinks.  Banks who finance leased residential solar PV projects have taken advantage of rules allowing them to substitute the “fair market value” of the installation rather than the actual project cost.  The cost inflation is as high as $4.00 per Watt and can cause million of dollars in overpayments of federal tax credits to bankers.[10]

One other federal incentive is the use of loan guarantees to support large-scale, centralized renewable energy projects.  For example, a 250 MW parabolic trough concentrating solar power plant in Arizona received a $1.45 billion federal loan guarantee,[11]which means the federal government will pay the loan back if the developer is unable to, helping the developer borrow at a lower interest rate.  Such guarantees skew the playing field when, on the other hand, Southern California Edison is building 250 MW of distributed small-scale PV projects for a levelized cost of 16-18 cents per kWh, with no federal loan guarantee.  Big solar gets additional federal support that distributed solar does not.

Even in California, a leader in distributed solar, the state and federal rules for interconnecting distributed generation projects create a major barrier.

For example, while there is supposed “Fast Track” approval for small-scale distributed generation projects (under 3 MW), California utilities managed to insert a “poison pill” into interconnection rules that exposes developers to “uncapped, undefined, and indefinite cost liability.”  There’s little guarantee that a Fast Track application will not morph into a larger “Independent Study Procedure” of grid impact, because any system upgrades trigger this higher standard of review.[12]

To make matters worse, there are no objective criteria for this more complex Independent Study Procedure review so an applicant has little indication of success despite advancing a $50,000 fee.  There are also no timelines for completing such studies, and recent interconnection standards approved by the California PUC will result in an average study timeframe of 2-3 years.

Furthermore, a large portion of the data a developer would need to clarify and expedite interconnection is considered proprietary by the utility, sealing it in a black box.

Without basic information about the number of applicants in the utility queue, the prospects for obtaining interconnection, and the eventual costs, current rules remain an enormous barrier to expanded distributed generation development. 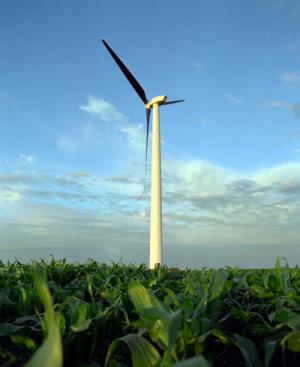 Permitting and siting for wind and solar projects is  typically handled at the local (city or county) level.  This local authority provides an opportunity for local residents to discuss the merits of sometimes-large renewable energy projects.  However, the inconsistency of municipal rules for wind and solar increases development costs and can prove a barrier to decentralized as well as centralized power projects.

For wind power, some counties have instituted complete moratoriums on wind projects and other have established setbacks and other stipulations that create a de facto ban on new wind turbine construction.  Sometimes state rules are established to provide a more uniform set of rules for developers, but this process isn’t without controversy.  The Wisconsin legislature is currently embroiled in a debate over wind siting rules, with some draft rules so stringent – to appease local opposition – that they would effectively close the entire state to new wind development.

For solar power, permitting rules  vary widely between municipalities, and costs often far exceed the cost to issue the permit.  A recent report found solar permitting costs averaged $2,500 per project.  As solar PV costs continue to fall, the portion of project costs devoted to permitting can rise as high as 20 percent.[14]

Proposed best practices for municipal permitting can reduce these fees by a factor of five, reducing the permitting share of project costs to 4 percent or less.  In Colorado, the passage of the 2011 Fair Permit Act caps the permit fees that local governments can apply.[15] 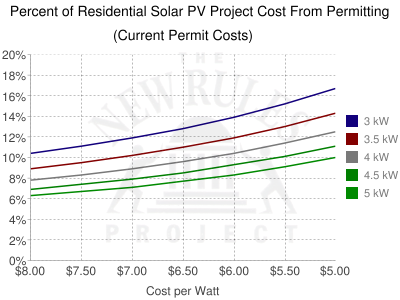 A widespread state policy for supporting on-site generation – net metering – allows generation of electricity for a home or business to be deducted from the monthly electricity bill at the full retail electricity rate.  This rate is often higher than the wholesale electricity rate that would otherwise be paid for electricity that feeds into the grid.

The major drawback of net metering is that it makes it economically advantageous to optimize the size of a solar array for on-site load rather than maximize it.  For example, a homeowner installing a rooftop solar PV system would not want the production from their solar array to significantly exceed their on-site consumption, because they will receive inadequate compensation for that power.  However, the overall cost of solar electricity would be lower if the homeowner could benefit from installing as much solar as could possibly fit on their roof.

Another issue with net metering is that utilities credit on-site generators with a deduction equal to the energy charge on the user’s bill, just as if the user had reduced on-site consumption by using conservation.  Such a practice does not credit the other values of distributed generation to the grid, including voltage regulation or deferral of infrastructure upgrades.