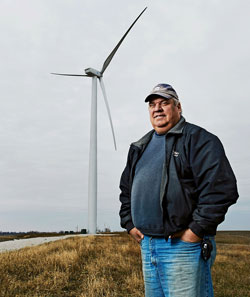 The idea began back in 2007, when Randy had an idea to build two wind turbines for the rural electric cooperative serving nearby farming communities. With grants from the USDA rural development program, Iowa production tax credits, and the section 1603 cash grant incentive from the 2009 Recovery Act, the two turbines were built by 2010. With that federal incentive slated to end by 2011, Randy and his fellow energy farmers made plans to erect six more turbines, financed by 180 local investors.  Shares in the projects were sold to friends and neighbors in the community. Most of the investors live within 30 miles of the turbines they own, and the dividends, tax-credits, and economic benefits remain in the community.

The legal work was complicated, but not insurmountable.  The state tax credits were capped at 2.5 megawatts, so each of the wind turbines are financed and owned by separate LLCs. Randy, along with local banks, was instrumental in setting up the financing schematics for all eight turbines.

Community support for the projects was and is strong, and the local utilities have appreciated the source of clean, local, low cost power.  Unfortunately, the expiration of the federal cash grant means there are limited opportunities to replicate the project, but the work of Randy and Green Energy Farmers stands testament to the power of collective ownership of clean energy.

This is the 4th edition of Local Energy Rules, a new ILSR podcast that is published twice monthly, on 1st and 3rd Thursday.  In this podcast series, ILSR Senior Researcher John Farrell talks with people putting together great community renewable energy projects and examining how energy policies help or hurt the development of clean, local power.

Energy New Podcast Series on Local Energy in the U.S.