From outdated technical rules to local permitting to incentive policies, there are opportunities to increase the potential for local solar.

This is the fourth of five parts of our Rooftop Revolution report being published in serial.  Read Part 1 or Part 2 or Part 3. Download the entire report and see our other resources here.

A prominent “technical” barrier is the so-called “15% rule.” It’s a rule adopted in many states that says that distributed renewable energy systems can only make up 15% of the peak energy demand on the portion of the electricity system that serves residential areas (called the distribution system). To go beyond the 15% limit, proposed solar power projects would have to complete complex and costly engineering reviews to connect to the grid, making more solar cost-prohibitive.1 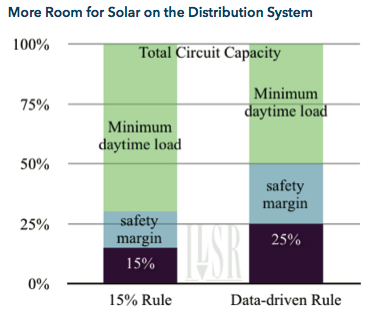 The 15% rule was first adopted in California’s “Rule 21” for interconnecting distributed generation in the year 2000. The 15% rule comes from an assumption and a simple calculation. It’s assumed that the daytime minimum load on a distribution

circuit (one strand of the local electric grid) is approximately 30% of the peak demand. This 30% represents the most solar capacity that could be installed on a distribution circuit without potentially producing more than the circuit’s load. The 30% was divided in half as a safety margin, making the threshold 15% of peak load.

The 15% rule now governs most state distributed generation policies (and is part of FERC’s Small Generator Interconnection Procedures) and has started to create problems in states with the most local solar power development, including Hawaii and California.

Raising the threshold seems reasonable because potential impacts of high distributed generation penetration (such as maintaining a constant voltage on the grid) have not proven out.2 In particular, there are several illustrations of the ability of the distribution grid to handle very high portions of solar PV generation, much more than the 15% rule.3

Energy storage is among other potential technical solutions to the 15% (or 25%) rule. Electric vehicle batteries or other storage connected to the distribution system could absorb some portion of solar electricity at periods of high production and low demand, and push the power back into the grid when it’s needed. Research at the Department of Energy and many private companies continues to search for ways to maximize the penetration of distributed solar power with storage and electric vehicles.

Local permitting rules significantly increase the cost of installing solar projects, especially on residential property. In a study released in early 2011 by solar installer SunRun, permitting costs represented 8-10% of the total
project cost ($6.40 per Watt) of typical residential solar projects (3-4 kW). At $4.00 per Watt (our estimate for the best possible residential solar installed cost today), these permit costs would be 16% of project costs for a 4 kW array. If nothing changes by 2018, when solar installed costs could fall to $2.41 per Watt, unchanged permitting policies would represent 26% of the price of a 4 kW solar array.4

Fortunately, the Solar America Board of Codes and Standards has already developed a set of best practices that may significantly reduce the cost of permitting for solar projects. Their exhaustive list of strategies (such as expedited review based on a checklist, email rather than in-person permit submission, etc) can reduce permitting costs by 75%, giving a very different picture. 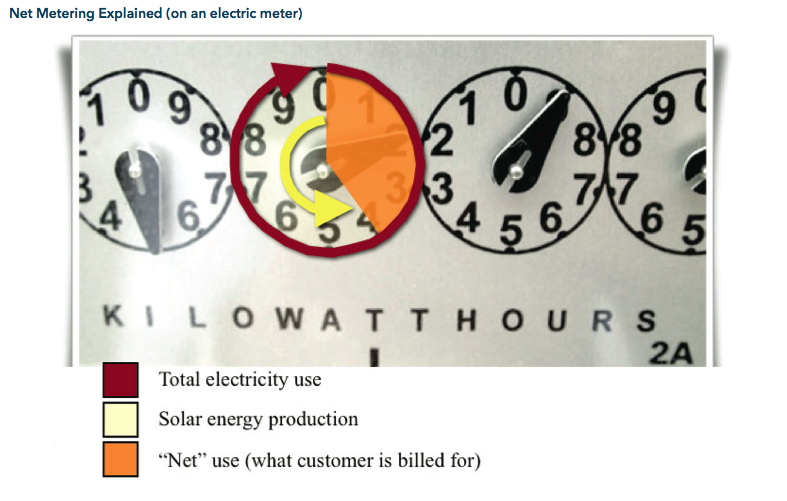 Another potential barrier to fulfilling the potential of solar grid parity are limits on and limitations of net metering. Net metering laws in 43 states allow for on-site solar power producers to rollback their electricity consumption. For every kilowatt-hour (kWh) offset by on-site solar, the customer saves the retail charge for electricity, e.g. $0.10 per kWh. The following chart provides a simplified example, where the customer uses 100 kWh in a month, but because their solar array produces 60 kWh, they only pay for the “net” consumption, 40 kWh.

In general, customers using net metering get paid the retail rate for solar electricity so long as production does not exceed on-site consumption (by very much). The advantage of net metering is that people generally find a combination of energy efficiency and solar power that minimizes their electric bill, and the accounting is all handled by the utility using a single meter.

Net metering has political advantages as well. Since it doesn’t require any public money (but instead requires the utility to provide the accounting measure), it feels free. 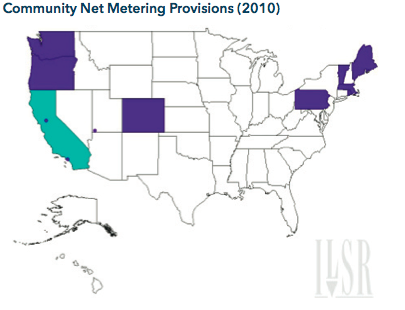 One drawback of net metering is that a person must own a suitable, sunny rooftop or open space to install solar. Since only two-thirds of residential properties are owner occupied, and scarcely 25% of residential rooftop space is suitable for solar,5 that significantly shrinks the potential universe for solar power. Additionally, net metering can encourage sub-optimal economies of scale for distributed solar. Since people who regularly produce more solar electricity than they use on-site get paid a very low rate for that power (rather than the retail electricity rate), it discourages people from maximizing the size of their solar project. And with steep economies of scale at small project sizes, this means the social cost of solar power is higher with policies that cap project sizes (net metering) than with those that do not.

One policy solution to this net metering limitation is generically called community solar. At its simplest, community solar policy means “community net metering.” This policy, adopted by seven states and a number of individual utilities as of 2010, allows customers to build a common solar panel array and share the output via net metering on their individual bill. For example, the electricity from a 30 kW solar array on a nearby church could be shared among ten local owners, each receiving a share of the electricity output in proportion to their ownership share. The accounting is identical to net metering, minus the on-site solar. Customers still cannot get credit for significantly more solar electricity than they consume, but they do not need to have a sunny rooftop.

Community net metering is simply an accounting measure, but it can provide a way for many people to share the electricity output from a single solar array in their community, and make centrally located community solar projects possible. In addition to opening the door to solar for folks without  suitable rooftops, by allowing people to share larger solar arrays it can also modestly reduce the cost of going solar. The following chart illustrates the economies of scale of solar power installed in the U.S. To use the example of a church roof-top array, it’s possible to see the cost savings from sharing a 30 kW array with a typical cost of $6.50 per Watt compared to 10 individual 3 kW arrays at $7.30 per Watt.6 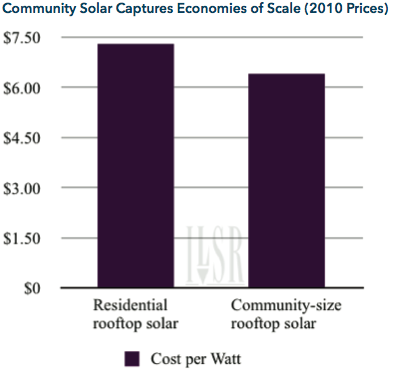 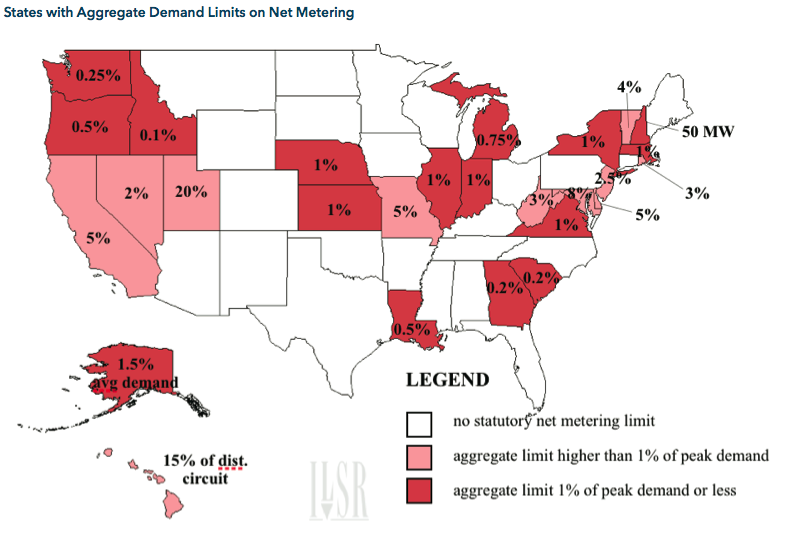 Another drawback of net metering is that it is often limited on a system-wide basis in many states, to a certain percentage of a utility’s load or peak load. California, for example, requires utilities to accept up to 5% of their peak demand from net metering, but no more.8 Most states limit net metering to 1% of a utility’s peak demand or less. The following map shows states with an aggregate net metering limit.9 States in dark red have limits 1% or less and states in light red have limits that are higher. States with no color have no statutory limit on net metered systems.

Fortunately, states can change their aggregate limits, as California did in 2006 (to 2.5%) and 2010 (to 5%).10 However, there’s no guarantee of a sufficiently favorable political environment in other states.

Energy For Cities, Solar Benefits May Not Override Fear o…