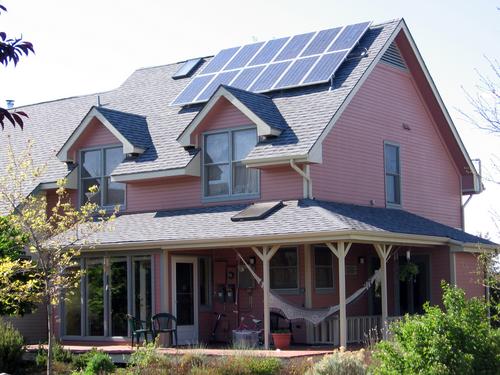 Distributed generation (DG) puts energy production close to where it is consumed, often on people’s homes or in their backyards.  But just having a rooftop solar module doesn’t mean that every kilowatt-hour produced from sunlight is used in the home.  In fact, it’s often less than one-third, with the remaining energy production flowing out into the grid.  The Germans, ever the DG innovators, are trying to make policy that puts those electrons to work closer to home.

Germany’s renewable energy policy is ruled by the awkwardly named but fantastically successful feed-in tariff.  This policy requires utilities to connect every renewable energy producer to the grid and purchase all their output at a flat, attractive rate on a long-term contract.  It’s responsible for more than 3 gigawatts of solar PV being installed in just three months in 2010 (ten times as much as the entire U.S. installed in 2008).  Their success has inspired Ontario, Vermont, and Gainesville, Florida, to adopt feed-in tariffs, as well.

With new revisions to their 2010 feed-in tariff, the Germans are looking to amp up on-site use of distributed energy.

Their recently adopted policy, roughly translated as “own consumption,” provides higher prices for electricity that is produced and consumed on-site.  In 2010, a German homeowner with a solar PV array can get 3.6 euro cents – in addition to the existing feed-in tariff price – for every kilowatt-hour consumed onsite, for up to 30 percent of the system’s production.  But the more interesting component of “own consumption” is the higher price – an 8 euro cent bonus per kilowatt-hour – for on-site consumption above that first 30% of system production.

The new policy addresses a specific problem: much of the electricity from a residential solar PV system is generated when the residents are not home (e.g daytime on weekdays).  Many homeowners will get the existing own consumption bonus on the first 30 percent of production from their rooftop solar array in part because the average German residential rooftop solar array generates three times the household’s electricity use.  But getting the higher, 8-cent bonus will require greater efforts.  German homeowners may have to invest in smart appliances, timed to operate when the solar panel is producing sufficient power, or they could invest in batteries to store electricity for use when they are home or during nighttime hours.

The policy of own consumption is not without fault. For one, a third meter is required to measure “own consumption,” at a substantial cost to the homeowner of 200 Euros.  Additionally, it’s unlikely that higher on-site consumption  could be accomplished without financial investment in storage or smart appliances.  It remains to be seen whether it would make sense for a consumer to pursue the additional own consumption incentive, because the cost of earning it may outweigh the financial benefits.

Much like the many iterations of the feed-in tariff, own consumption will require a few revisions to work well.  But in conceiving of a policy to encourage greater on-site consumption, Germany has again established itself as a policy leader on distributed generation.

Hat tip: Much of the information in this post derived from Craig Morris’ excellent series on peak demand parity in Germany.