Are buy-local initiatives having a positive impact on local economies? To many, the answer is a resounding “yes”

Sharon Fenno knew that many consumers have been rethinking their shopping strategies in recent years to be more supportive of locally owned businesses, but she was still surprised by something that happened recently in Circles, her women’s specialty clothing store in Stuyvesant Plaza.

A woman shopping in the store told Fenno that she had just seen a website offering 30 percent off on Clarisonic, a sonic cleansing brush. “She came in,” says Fenno, “and said I’d rather support a local business, and bought it full price. Truly, I was shocked.”

Fenno, who also does her part to promote the local economy by carrying three local jewelry designers, a local clothing designer and a local body-care line, notes that certain people have always preferred to shop at small, locally owned businesses; they like the service, they like to buy from somebody who knows their name. But since the recession began in 2008, buy-local (and eat-local) movements have gained considerable momentum. Organizations like Capital District Local First have sprung up or strengthened across the country; phrases like “locally sourced” have become part of the daily lexicon. Last year’s Occupy movements got more people questioning corporate domination of the economy, and the for the most part, the media, perhaps surprisingly, have given a fair amount of coverage to these various initiatives.

“I think more people are aware of it, and I think more people are shopping locally because of all the promotion,” says Fenno, adding that she continues to see customers who make a point of buying from her rather than national chains and websites. “One woman came in and said, I saw a pair of Frye boots online, but if you can get it for me, I’d rather give you the business.”

Advocates for stronger, locally based economies have long urged consumers to consider that while big-box prices might seem cheaper, they hurt communities in the long run because they drain resources away. While estimates vary, experts use numbers in the 70-percent range to describe how much money spent on local businesses remains in the community, compared to around 40 percent for spending at chains. Among other things, that money drain helps support costs some consumers might find objectionable, such as the cost of shipping goods long distances, large-scale marketing campaigns, and high corporate salaries.

Stacy Mitchell has been studying local, sustainable economies for more than a decade, and her nonprofit organization, the Maine-based Institute for Local Self-Reliance, has been conducting surveys for several years in an attempt to collect real data measuring any shifts in consumer spending habits. According to the group’s survey of 1,768 independent, locally owned businesses across the country during an eight-day period in January 2011, a majority of business reported revenue growth in 2010, and more important, they reported stronger holiday sales than the industry average. And more than three-quarters of the respondents said that public awareness of the benefits of supporting locally owned businesses increased over the previous year.

There is a definite growth in buy local initiatives and public consciousness/awareness,” says Mitchell. “As for behavior change, that’s tougher to prove definitely, but I can point to three types of evidence.” One is the aforementioned survey. “Also, there is a resurgence of local businesses in some categories, notably in the food sector (farms, farmers markets, neighborhood grocery stores), some retail categories (bookstores, fabric stores, etc.), and among credit unions. All driven, it appears to me, by shifting sentiment. And the third is the anecdotal. I’ve been in this field for more than a decade, and things have most definitely changed from my perspective, and I hear that from local business owners quite a bit.”

Jeff Milchen, co-founder of the Montana-based umbrella organization the American Independent Business Alliance, echoes Mitchell’s analysis and adds that the success of buy-local movements does not seem to be contingent on cultural and political factors like a community boasting a high percentage of liberal-leaning residents or “cultural creatives.”

“One of the most exciting things about the burgeoning localization movement,” Milchen says, “is that Independent Business Alliances and related organizations have thrived in communities of all sizes, economic circumstances, geographies and political leanings.”

As for the possibility that we are seeing a long-term shift in attitudes, Milchen says, “The evidence appears in many different realms, including: Tremendous growth in local food initiatives, farm-to-school programs and farmers markets; increasing growth of Independent Business Alliances/Local First groups, their long-term viability and impact; more communities passing laws geared toward leveling the playing field and passing pro-local policies, such as local purchasing/contracting preferences. Pro-local holiday initiatives like Shift Your Shopping and Small Business Saturday (AMIBA is a partner in both campaigns) took a huge bite out of the news space usually focused on chain stores/Black Friday, and early evidence suggests sales are indeed shifting.”

Milchen adds that there is a “growing backlash against the sales tax exemption enjoyed by Amazon and other online giants and against ‘showrooming.’ This is happening at both the state and national levels.

And while many people’s main objection to shopping locally is that they simply cannot afford to, Milchen says, “Note that this movement has grown most rapidly during the recession. Even while money has been tight, more people are coming to distinguish the gap that often exists between cheap prices and overall value, where indies frequently can win the competition.”

Media Coverage Walmart: Screwing Over Farmers While You Get Fat, … 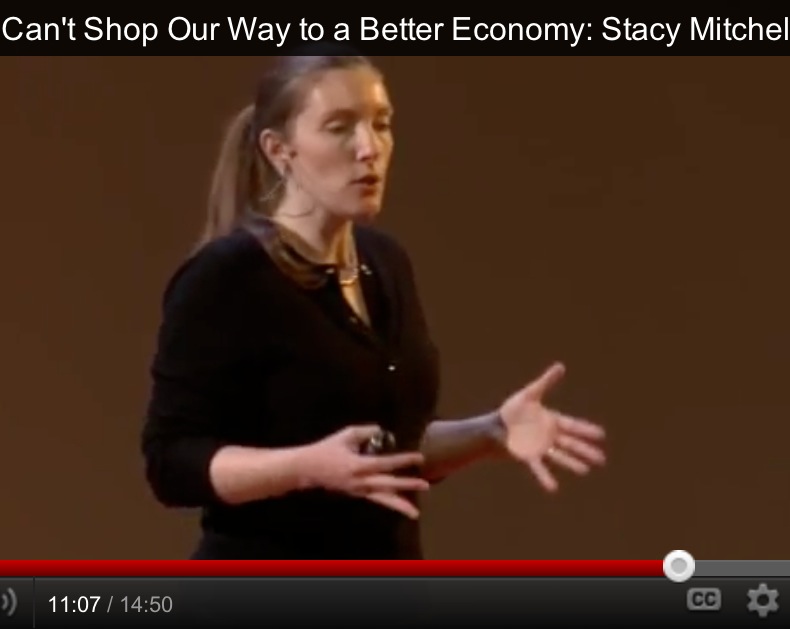