After a novel cooperative law passed in Oregon, residents can invest in solar on their house of worship, their children’s school, or the neighborhood public library.

For this episode of the Local Energy Rules podcast, host John Farrell speaks with Dan Orzech, General Manager of the Oregon Clean Power Cooperative. This co-op, through its novel structure and rules, allows Oregon residents to earn a return by investing in local renewable energy projects. Farrell and Orzech discuss how a renewable energy cooperative operates, the importance of local energy for Oregon, and how this model can spread beyond the state’s boundaries.

There are many solar incentives for individual owners. However, non-profits, individuals with limited means, and communities seeking the benefits of solar energy have traditionally faced many barriers.

Along with this change, state securities regulators needed to come up with rules for a renewable energy cooperative. This was no easy process, according to Orzech. Finally, in May of 2015, the Oregon Clean Power Cooperative was up and running.

The Oregon Clean Power Cooperative shares the structure of all co-ops: it is member-owned and democratically governed. It is an umbrella corporation for cooperative energy projects through the state.

The co-op’s energy projects, primarily solar, are funded by the investments of members — who must reside in the state of Oregon. As Orzech describes, individuals become members of the co-op for a variety of reasons. Some people want to invest in a specific project in their community, while others choose to support solar in Oregon more broadly. To date, the co-op has finished nine projects and has many more in the works.

What we’ve tapped into is a lot of appetite, a lot of hunger… to invest in their own communities, to invest in a project that does something good for their community that they can actually see. 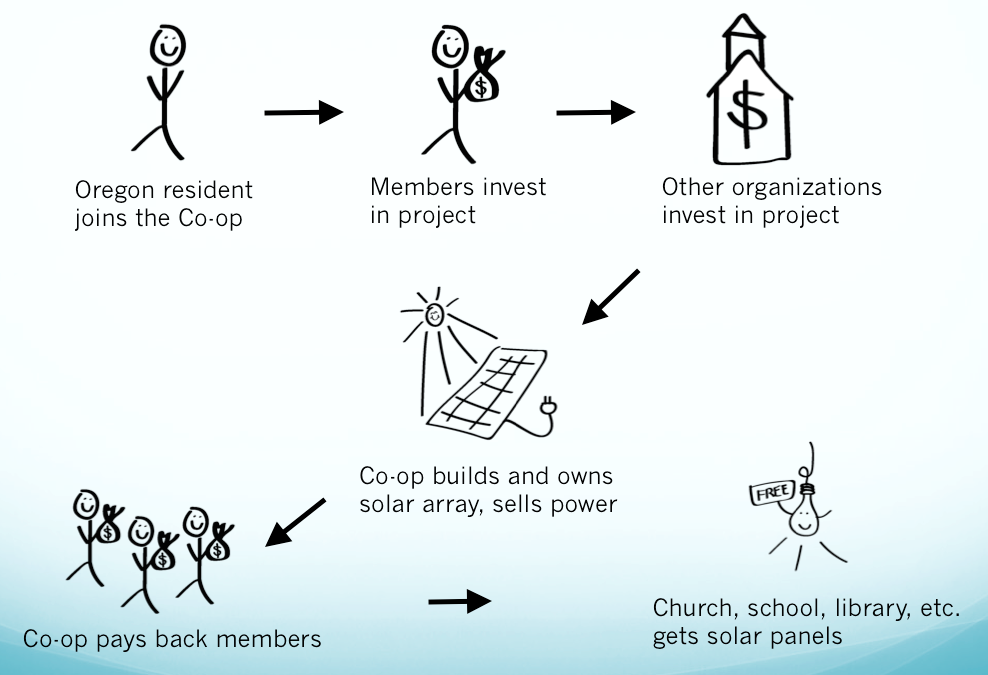 Making use of tax incentives has been a challenge for the co-op, and is a challenge most unconventional solar projects face. Orzech says that the co-op does not have the tax liability to take all of the tax credits, so it often finds third party investors who will take them.

For more on overcoming the barriers to community solar, check out ILSR’s report Beyond Sharing.

The co-op is a corporation, not a non-profit, but it does tend to fund projects for what Orzech calls “community organizations.” These include schools, libraries, non-profits, and houses of worship.

Communities throughout Oregon have embraced the co-op model, as evidenced by its fundraising success. For one project, Orzech says that the co-op was able to raise sufficient funds from members in only 90 minutes.

People are literally owning a piece of the solar on their kids’ school, or their town’s fire station… and that’s a powerful connection, an emotional connection, if you will, that you don’t get when you invest in a mutual fund or your IRA

Community Powered, and More Resilient For It

The co-op, which had been primarily funding solar projects, completed its first battery-paired solar project in 2018. Orzech says the corporation plans to include some amount of energy storage in every project going forward. There is growing interest in energy storage in the Northwest for many reasons, one of which is increased resiliency.

Wildfires, and their preventative or ensuing blackouts, are a danger outside of California. In fact, Oregon electric utilities have adopted the California utilities’ policies to shut down power when there is a great risk of a fire.

Beyond fires, Orzech and Farrell discuss the possibility of a major earthquake in Oregon. The earthquake, called “the really big one” or the Cascadia earthquake, would be devastating for the West Coast. Installing solar and energy storage increases resiliency in the case of this event, while providing emergency power for more regular events like fires and floods.

We’re hoping it doesn’t come anytime soon, but we’re trying to be prepared.

Orzech says he hopes Oregon’s community solar program launches soon, as it provides another opportunity for the co-op to grow.

This is the 96th episode of Local Energy Rules, an ILSR podcast with Energy Democracy Director John Farrell, which shares powerful stories of successful local renewable energy and exposes the policy and practical barriers to its expansion. 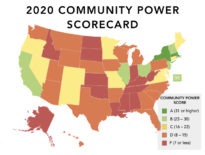 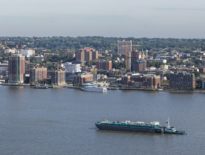