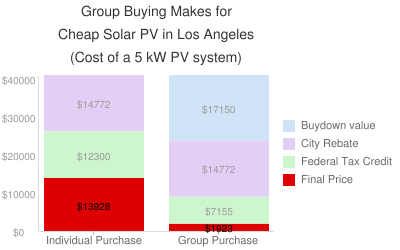 Residential solar PV in Los Angeles is getting a huge boost from a new community solar buying group. With typical residential installation costs for crystalline solar PV, residents would see a 20-year payback on a solar PV installation or a minimal 2% IRR on a 25-year investment (without factoring an inverter replacement).  But what about a 4-year payback?

Average residential solar PV installation costs are between $8 and $9 per Watt, as reported by Solarbuzz and seen from the California Solar Initiative data.  But residents of Los Angeles can get solar PV installed on their home or small business for $4.78 per Watt with the Open Neighborhoods community solar program.  Residents can pay the significantly discounted price up front, but can also elect an installment program, zero-down loan, or zero-down solar lease.  The wide range of options lets residents choose an acceptable level of risk as well as opening the door to participation from low-income Los Angelinos with a suitable roof for solar PV.

The following table illustrates the substantial savings from the buying group, comparing a 5 kW solar PV system purchased individual at the typical prices and one purchased through the Open Neighborhoods program.

It’s not much of a question as to whether a Los Angeles resident should try to participate if their rooftop is suitable.  The bigger question is why anyone would go solar without joining a buying group.  The discount obtained by Open Neighborhoods is similar to those obtained by other buying cooperatives, from California to Colorado to Washington, DC.  For more on buying groups and other community solar models, see our recently released report, Community Solar Power: Obstacles and Opportunities.

Update 10/28/10: We missed the 0.9 adjustment factor on the upfront city rebate in the first version of this post.  That reduced the rebate value from $16,413 to $14,772 for both systems, with a commensurate increase in net installed cost.  Payback for the individual system rose from 19 to 20 years, and IRR dropped to 2%.  Payback for the group purchase system did not change because that figure had already been adjusted. The chart, table, and text were changed. 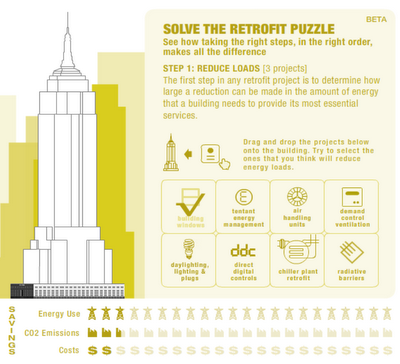