In the state of Washington, advocates hope that the third time’s the charm for passing community solar legislation.

After advocating for local ballot initiatives that did not pan out, Mason Rolph looked for a more fruitful and tangible advocacy space. In 2018, he had the idea to put solar panels on the Olympia Hands On Children’s Museum. When other environmental groups failed to see potential in the project, he co-founded a 501c3 to move forward.

The first project Olympia Community Solar developed was a 117 kilowatt array on the children’s museum. The array was divided into $300 “solar units,” which community members could subscribe to themselves or donate to a local non-profit. Thanks to enthusiastic subscribers and grant support, the solar array is generating enough energy to power 12 homes. Rolph says that Olympia Community Solar will soon make the first payments to the 97 subscribers.

Rolph’s non-profit has developed a second community solar garden for the Olympia Farmers Market. The project is fully enrolled, but not yet built. Olympia Community Solar has also sponsored a residential solar group-buy program, provided education to solar installers, sent learning materials on the solar industry to prisons, and lobbies for solar-supportive policies at the state legislature.

Individuals face many barriers to installing rooftop solar. If they are a renter, live in multifamily housing, own a home with an old roof, or have a roof that is too shady, rooftop solar is not an option. Plus, even if the individual owns a home with a suitable roof, they must have the upfront capital or financing options to go solar.

Our proposal is acknowledging that barriers prevent most Washingtonians from accessing the benefits of rooftop solar.

Community solar circumvents those individual barriers, but Washington policy does little to support community solar. As it stands, Washington community solar developers need utility cooperation to credit subscribers for the remote solar generation they have subscribed to. None of the state’s utilities have volunteered to do so, says Rolph.

Rolph believes that implementing a community solar program would introduce more competition and consumer protection to the market — both necessary to reach the state’s goal of 100 percent renewable energy by 2045 (established by the Clean Energy Transformation Act).

Unless every customer in Washington has access to solar, reaching that goal is going to be next to impossible

The proposed bill has two parts. First, it creates a community solar program. Washington’s utility regulatory board would be in charge of the program. Under it, project managers get certified and apply for their community solar projects to receive bill credits. The project manager assigns credits to subscribers and the utility is responsible for crediting the customer’s electric bill.

Washington’s utilities claim that applying credits to customer electric bills is too complicated. However, utilities in the 20 states that enable community solar have found a way to do it.

Washington’s community solar program, as proposed by Olympia Community Solar, would carve out a portion of the program capacity for projects that serve low-income customers.

The second part of the proposed bill, as Rolph describes it, is a grant-style fund for low income solar projects. Washington State University has offered to manage the fund, which would support 40 megawatts of solar on low-income households. If it passes, this would be the state’s first funding for low-income solar, says Rolph. The state’s previous solar production incentive supported people with residential solar, but it did not expand access to individuals who could not otherwise install solar.

Utilities would benefit from the low-income solar incentive, as it would help them reach clean energy mandates and support their energy assistance programs. It is also an opportunity for positive “PR,” or public relations, says Rolph. As the two parts of the bill are tied together, utilities cannot fight one without preventing the other.

Our main goal is let’s get access for everyone. And once that access is enshrined in law, we can fund low income projects and actually extend those benefits to the folks who have been left out of the conversation.

This is the 147th episode of Local Energy Rules, an ILSR podcast with Energy Democracy Director John Farrell, which shares powerful stories of successful local renewable energy and exposes the policy and practical barriers to its expansion. 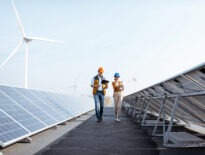