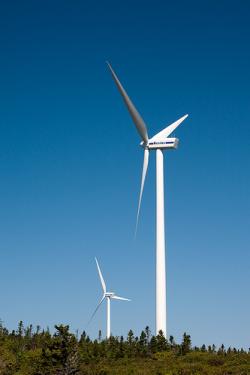 Yet another Canadian province is showing a serious commitment to the economic benefits of renewable energy development.  Ontario’s “buy local” energy policy has the promise of 43,000 local jobs from 5,000 MW of new renewable energy.  Now Nova Scotia is completing rulemaking for a provincial goal of 40% renewable power by 2020 that includes a 100 megawatt (MW) set-aside for community-owned distributed generation projects.  The policy promises to increase the economic activity from its renewable energy goal by $50 to $240 million.

Under the Community Feed-in Tariff (ComFIT), the community-owned projects will receive 20-year contracts for power at rates sufficient to ensure a reasonable return on investment.  The preliminary rates, designed by Synapse Energy Economics, were published earlier this year:

The eligible technologies include wind, biomass combined-heat-and-power, run-of-the-river hydroelectricity, and small-scale in-stream tidal power.  The projects must connect to the distribution system of Nova Scotia Power, and will largely be 6 MW or smaller.

For cooperatives, non-profits, and community economic development corporations, at least 25 members must live in the vicinity of the proposed project to ensure local ownership and to increase local acceptance of the project.

The policy is a serious commitment to locally owned renewable energy, and it promises a commensurate economic benefit.  For example, if the entire 100 MW promised under the ComFIT were simply developed as an absentee-owned wind project, it would generate around $100 million of economic activity.  With community ownership under the ComFIT program, the economic impact will rise to $150 to $340 million.

The province’s energy policy also includes enhancements to standard net metering, allowing individuals and businesses to develop renewable energy projects (including solar and other technologies not supported under the feed-in tariff) of up to 1 MW to generate power for on-site use.  Producers can aggregate all their meters under a single account to net meter, and may also receive compensation at the retail rate for all excess power generation.

Renewable energy offers clean electrons and great promise for new economic development, but few American states have shown the focus of Ontario and Nova Scotia on the economic potential.