Can new leadership send a southern city on its way to 100% renewable energy?

For this episode of our Voices of 100% series of the Local Energy Rules Podcast, host John Farrell speaks with Breea Clark, mayor of Norman, Oklahoma. Clark has only just become the mayor of Norman, but she is all in on 100% renewable energy. The two discuss why acting at the local level is so important, along with the tools that Norman has to advance its ambitious goal.

Listen to the full episode to learn how Norman is taking action to support local, clean energy, and explore more highlights and resources, below — including a transcript and summary of the conversation.

Breea Clark was sworn in as mayor of Norman on July 2, 2019 – only weeks before her conversation with Farrell. Before becoming mayor, Clark served three years on the City Council and helped pass a unanimous resolution to transition to 100% renewable energy by 2050. Now, she leads the effort to implement this goal.

Throughout her campaign, and in her new position, Clark’s focus has been on infrastructure. To Clark, infrastructure projects bring about an uncontroversial good: they build the clean and healthy communities that everyone wants to live in. At the local level, infrastructure projects are what people care about, regardless of their politics. She says a favorite phrase of hers is that “partisan politics don’t fill potholes.”

Clark references the Norman Forward project as an example of what community members want to see. Through this initiative, the city is constructing public buildings and updating parks. Residents and community groups came to the council with the proposal in 2015. With so much construction underway, Clark says the city ought to do it sustainably.

Another project important to Norman is the rebuilding of its transportation system. Clark explains  that few people use public transit now. However, given some investment, she sees potential for a thriving system that works for all residents. After severing its relationship with the prior transportation system, the city has the opportunity to rebuild a cleaner, more functional one. Building a cleaner system decreases vehicle emissions, which are a driver of inequity. Transitioning to clean energy in the transportation sector will ease pollution in disproportionately targeted areas of the city.

Norman’s commitment has two goals: renewable electricity by 2035, and a complete transition to renewable energy by 2050. Clark says this commitment is not just for the environment, but for the city’s future. They need to take these steps now, because their goals will take some time to reach. This is why it is important for local action. Clark says:

We can wait forever for the state government or the federal government to do something, or we can do it on our own.

The city of Norman has done more than set an ambitious goal – it is creating an action plan that will get it there. On January 1st, 2020, the Environmental Control Advisory Board (ECAB) will present its timeline to the city council. ECAB hasn’t been working alone. Norman’s electric utilities have been presenting to the board, since their renewable energy portfolios and long term plans will affect Norman’s transition.

So what action items will be in the timeline? Clark mentions many different projects she’s interested in seeing, including streamlining solar codes and putting solar on schools.

One project Norman has tried is a home permitting program. In a pilot program, the city gave homebuilders incentives to build more efficient homes. During the pilot period, 94 homes were built using these incentives – 25 percent of homes built during the time. Because of the program’s success, Clark says the city may even extend it. However, she warns against relying too heavily upon incentive programs. She says that “incentives are only going to go so far.” At a certain point, further sustainable development must be enforced through code.

Clark mentions two utility companies in the interview: Oklahoma Gas and Electric (OG&E) and the rural Oklahoma Electric Cooperative (OEC). Investor-owned OG&E determines the energy sourcing for Norman. However, with the expiration of its franchise agreement with OG&E, the city has an exciting opportunity to determine its own energy future.

The city has been negotiating the agreement renewal for a while now. As technology changes and renewables become increasingly available, Clark sees big advantages in signing on to a shorter agreement. Meanwhile, utility investors want a long-term agreement to mitigate their own risk.

In these negotiations and beyond, Clark stresses the importance of viewing the utility as a partner. Norman cannot fulfill its 100% renewable commitment without the utility. So, she emphasizes thinking creatively and having the patience to find a solution that works for both the city and the utility.

While a lot of this seemed challenging at first – franchise agreement negotiations, the bus system going away – the big picture if you step back is that it has actually provided us with a very unique timing opportunity to set us up to be successful with our ready for 100 commitment.

Norman is not the only city to pin clean energy hopes on a new utility franchise agreement. Five years ago, Minneapolis negotiated a new agreement with utility Xcel Energy – an effort Farrell was involved in. Though it was not an absolute success, Farrell says, there were still some lessons other cities should take away.

Learning from the Past

Norman, Okla. was one of thousands of cities in the early 1900s called “sundown towns.” In these towns, which were primarily in northern states, it was unsafe for African-Americans to be in the town after dark. The condition was enforced both through official policy and through intimidation and violence. Though the phrase sundown town is historical, its legacies carry on for many of these cities.

Considering this backdrop, Farrell asks Clark what Norman is doing to make the transition to 100% renewable energy as inclusive as possible. One group within Norman, the Norman Citizens for Racial Justice, has provided a list of action items to the city. Clark describes their concerns as based upon environmental problems: access to resources, food deserts, energy affordability, access to renewables, and clean drinking water. Clark stresses that city officials must listen to the concerns of residents and not make assumptions on what their needs are. Within this framework, an inclusive plan to transition Norman to 100% renewable energy will be on its way.

We are doing our part. And like any community, we can always do better, but I’m excited to move forward with that in mind. We need to make sure these people are included in our communities and are part of the discussion.

Where to Find Inspiration

Mayor Clark attended school in Wichita, Kansas, at Maize High School. There, teacher Stan Bergkamp has started an initiative to power the school with solar. After raising hundreds of thousands of dollars through crowdfunding and corporate donors, the Maize High School solar garden went online in June of 2019. Clark is inspired by how her former teacher built community around solar and was unafraid to try something new.

Partnerships and collaborations are key. Norman needed public-private partnerships and community involvement in order to even create its ambitious commitment. In Norman and everywhere, a committee making a timeline will not result in 100% renewable energy. Rather, the simultaneous work of the city, environmental justice organizations, the Sierra Club, private groups, and residents will advance this goal.

This is the 13th episode of our special  Voices of

series, and 84th of Local Energy Rules, an ILSR podcast with Energy Democracy Director John Farrell, which shares powerful stories of successful local renewable energy and exposes the policy and practical barriers to its expansion. 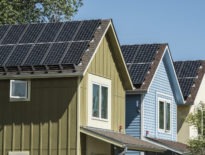 Energy The Environment, The Economy, and Equity – Episo…
Sign Up For Energy Democracy News