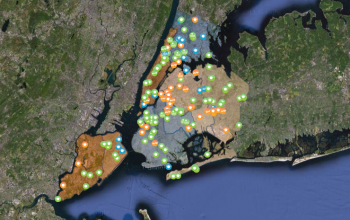 The City University of New York (CUNY) released a solar map of New York City last week, allowing building owners in the city to determine the amount of solar power their roof could host.  The cumulative impact is enormous, with city rooftops capable of providing half the city’s peak power, and 14% of its annual electricity consumption.

At $3.50 per Watt installed, and with the federal 30% investment tax credit (ITC), solar power in New York City can provide electricity at 16 cents per kilowatt-hour (kWh), a full 4 cents lower than the average residential electricity price (as reported by the National Renewable Energy Laboratory’s PV Watts program).

Commercial installations that can also use the federal depreciation tax deduction could deliver electricity for nearly 12 cents per kWh, 40% lower than the average residential rate. 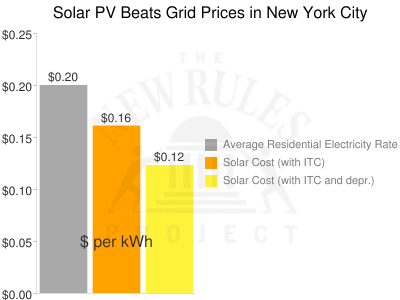 These prices are well within reach.  Already in the U.S., aggregate purchasing has driven down residential solar PV prices as low as $4.22 per Watt.  The average cost of rooftop solar PV installations in Germany is between $3.40 and $3.70 per Watt.  In our new report, Democratizing the Electricity System, we show that even small-scale solar is being built for under $4 per Watt in the U.S.

As it turns out, when it comes to solar self-reliance, New York City is a microcosm of the state (in solar potential if not comparative electricity price).  In our 2009 analysis, Energy Self-Reliant States, we found that New York’s statewide rooftop solar PV potential was 15% of its electricity consumption, almost identical to CUNY’s estimate of 14% of the city’s electricity use.

Whether immediately (NYC) or in the near future (NY state), it’s clear that rooftop solar PV is the route to greater energy self-reliance and electricity cost savings.