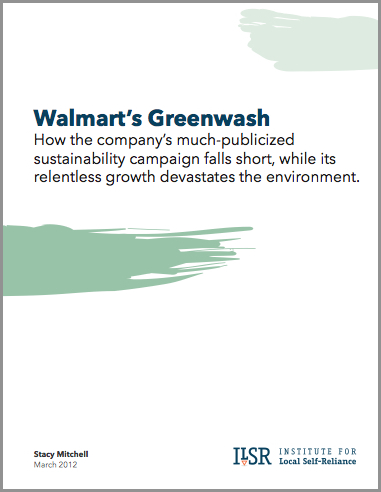 March 7, 2012 | Minneapolis, MN — In a report released today, the Institute for Local Self-Reliance documents how Walmart’s heavily promoted sustainability initiatives are falling short. The report, “Walmart’s Greenwash”, examines all aspects of the major retailers environmental impact to see how sustainable Walmart really is.

The report’s key findings include:

— At its current pace, Walmart will need roughly 300 years to reach its goal of 100 percent renewable energy. As of 2011, Walmart was deriving only 2 percent of its U. S. electricity from its wind and solar projects.

— Walmart’s greenhouse gas emissions are increasing rapidly. Its energy efficiency and renewable projects are too modest to match the scale of the company’s operations.

— Walmart’s price pressure on manufacturers is undermining the quality and durability of consumer goods, which has contributed to a sharp increase in the amount of stuff Americans buy and a doubling of the trash households generate.

— Walmart has not addressed the habitat and climate impacts of its land development practices. The retailer continues to build sprawling stores on undeveloped land, often just a few miles from older, vacated Walmart stores.

— Walmart has made little progress toward its goal of developing a Sustainability Index to rate consumer products.

— With its share of U. S. grocery sales at 25 percent and growing, Walmart is driving further consolidation and industrialization in our food supply, harming the environment and small-scale agriculture.

About ILSR
The Institute for Local Self-Reliance (ILSR) is a 38-year-old national nonprofit research and educational organization that works to support strong, community rooted, environmentally sound and equitable local economies. More at www.ilsr.org.

Media Coverage Report: Walmart Is Not Walking the Walk

Media Coverage Walmart: No More Divide and Conquer
Sign Up for the Hometown Advantage Newsletter