ILSR has actively worked with state officials and legislators for years to move Maryland forward on composting wasted food and other organics. Our aim: new capacity to compost food scraps that benefits local farmers and communities. We want Maryland to develop a healthy diverse and distributed composting infrastructure that encompasses composting at homes, onsite at institutions and businesses, community gardens, and at urban and rural farms. Too often, far-away large-scale industrial sites get privileged in both funding and policy. Such facilities can siphon business and jobs out of state, exacerbate truck traffic, and shift the market away from clean segregated materials to programs that inadvertently facilitate contamination and poor-quality compost. (See Failure of the Wilmington Compost Facility Underscores Need for a Locally Based and Diverse Composting Infrastructure and Stop Privileging Large Industrial Sites Over Local Composters — Building Local Power Podcast.)

Progress has been slow but steady. We pushed the state to improve its composting regulations, policies, and outreach in 2011 (HB0817); require Maryland Department of the Environment to adopt compost facility regulations in 2013 (HB1440); require the State Highway Administration to procure compost and compost-based products in 2014 (HB0878); publish new composting permits with carve-outs for on-farm composting in 2015 (COMAR Chapter 11 Composting Facilities Authority); and to set standards for which plastic products can be labeled as compostable or biodegradable in 2017 (HB1349 / ILSR press release). Now, four new bills recently became law that will further advance composting in Maryland:

See the summary table below for key requirements and weaknesses of each bill.

In April 2021, the Maryland Legislature passed House Bill 264, sponsored by Delegate Lorig Charkoudian (District 20). The bill’s goal is to divert wasted food from landfills and incinerators and spur the development of more capacity to reduce, rescue, and recycle this material. It became law May 30th without Governor Hogan’s signature. Starting on January 1, 2023, the bill targets large food waste generators (LFWGs) that generate two tons per week. A year later, those generating one ton a week will be covered. LFWGs, which include supermarkets, hotels, universities, food processing facilities, and food distribution warehouses, will be required to reduce, donate, or recycle their wasted food if capacity exists within 30 miles. The legislation spells out the many options LFWGs can pursue (from donating servable food and composting on-site to transporting the material offset for agricultural use, including for use as animal feed). In Maryland, most wasted food is landfilled or burned in trash incinerators. In 2019, of the estimated 927,926 tons of wasted food, only about 15% was recycled. Most of this tonnage is generated by Maryland’s estimated 3,961 LFWGs. 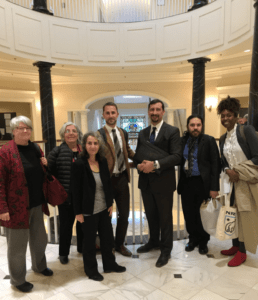 ILSR has worked to pass a version of this legislation for more than seven years:

The Maryland Restaurant Association was an ardent opposer of these earlier bills. Other opposition forces claimed that compost facilities could essentially price gouge, because if they were the only one in the 30-mile radius, the LFWG would be dependent on them for compliance with the law. In order to win passage of House Bill 264 in 2021, restaurants were removed from having to comply and a clause was added that LFWG’s can apply for a waiver if they find the cost of diverting food residuals from disposal is >10% more expensive than the cost of disposing their food residuals. Another factor in the bill’s success this year was the tireless campaign organizing done by Maryland Clean Water Action and its work leading a new Maryland Compost Advocacy Coalition. See, for instance, its Fact Sheet: Let’s Get Food out of the Trash!

Read our written testimony in support of House Bill 264 here.

Read the written testimony from the Million Acre Challenge project, of which ILSR is a founding member, here. “To help build healthy soils, farmers need not only access to high-quality compost but also assistance in composting onsite at farms.”

Brenda Platt, director of the Composting for Community initiative at the Institute for Local Self-Reliance, is a longtime supporter of this concept in Maryland but thinks the bill’s definition of “food residuals” may be too broad. Depending on how it’s interpreted, Platt believes this could lead to potential issues around material quality.

“What’s going to be important is how the administration develops guidelines for implementation, to ensure that the materials are source-separated and that they go to organics recycling facilities that are taking clean materials,” she said, adding that there shouldn’t be any privileging of “large-scale industrial sites that can take everything.”

As an example, Platt and others recently sent a letter to Vermont legislators asking for a review of how the state’s universal organics recycling requirement was being implemented. They noted concerns about commingling source-separated organics with material from depackaging facilities that may have plastic contamination, saying this trend has also diverted material from smaller-scale organics recyclers.

Maryland House Bill 248, which also became law May 30th without the Governor’s signature, clarifies rights and restrictions on composting regulations in condominiums and homeowners associations (HOAs). Under the new law sponsored by Delegate Emily Shetty (District 18), condominiums and HOAs can no longer prohibit or unreasonably restrict owners from subscribing to private compost collection services. For HOAs, the law extends to home composting: no more unnecessary restrictions preventing owners from composting on their property.

This bill is one of the first of its kind in the United States. A similar law in Texas states that property owners associations cannot prohibit, but can regulate composting systems.

Read our written testimony in support of the bill here.

In the Institute for Local Self-Reliance’s report, Yes! In My Backyard: A Home Composting for Local Government, we included a whole chapter on the importance of fixing archaic laws called “Ordinances: The Good, The Bad & The Ugly.” Today we’re seeing state and local governments enact laws to pro-actively support environmental practices like composting. The District of Columbia, for instance, passed a Home Composting Incentives Act, which took care of archaic language and clarified that home composting was permitted. HB0248 when passed will be another important piece of legislation clarifying that condominium and homeowners associations cannot restrict or prohibit property owners from composting at-home or contracting with private entities to do the composting for them.

House Bill 280 is another bill sponsored by Delegate Lorig Charkoudian (District 20) that became law May 30th. It alters the definition of “recyclable materials” under the Maryland Recycling Act to exclude incinerator ash, and repeals the authority of Counties to earn a 5% waste reduction credit toward their recycling plan targets by combusting trash.

Brenda Platt (ILSR compost director) and Emily Ranson (from MD Clean Water Action) met with Delegate Charkoudian in December 2019, where Brenda raised the perverse policy allowing incinerator ash to be counted as a recyclable material. Mike Ewall at Energy Justice Network has been calling this out for years. Delegate Charkoudian got it done in one session! Never underestimate the power of meeting with your elected representatives. MD Clean Water Action’s written testimony on SB304 (the Senate cross-file) highlighted the fact that “burning trash is not recycling” and “should not be credited under Maryland’s recycling goals.”

The proposed zoning text amendment was simple. The original 20% figure was essentially pulled out of the air. The new 50% threshold is a more realistic figure, although still limiting. To compost on-farm generated material like manures, farmers will need a source of carbon-rich feedstocks such as leaves and wood chips. The 20% threshold was a barrier to farmers, limiting their composting ability. It was identified as such in the County’s April 2018 Strategic Plan to Advance Composting, Compost Use, and Food Scraps Diversion. That plan made a number of recommendations to support on-farm composting, one of which was updating the County’s zoning text.

Read our written testimony in support of the zoning amendment here. (December 2020)

These new laws are encouraging. Putting them into action effectively will require developing plans, guidelines, and mapping systems. The regulatory roadmap is coming into sharper focus. What is needed now is implementation rules, funding, investment, and technical assistance directed at infrastructure projects that will create local jobs and high-quality compost to benefit Maryland’s farmland and communities.

Featured image: Farms like One Acre Farm in Montgomery County, Maryland, will benefit from new zoning legislation allowing farms to source more material offsite in order to produce mulch and compost. One Acre wants compost to improve the health and structure of its dense clay soils. Credit: ILSR.

Jade Boehmer is a summer intern for the Composting for Community Initiative. She earned a B.S. in Biology with a Concentration in Environmental Sustainability from Georgia Southern University in December 2020.

Jade Boehmer is a summer intern for the Composting for Community Initiative. She earned a B.S. in Biology with a Concentration in Environmental Sustainability from Georgia Southern University in December 2020. 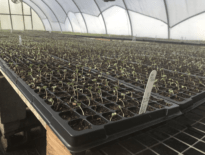 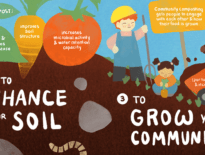 Composting Infographics: Compost for a Better Planet
Sign Up for Composting and Zero Waste News