Last November, the consulting firm Global Insight (GI) released a study that found that Wal-Mart saved U.S. consumers $263 billion in 2004. That works out to $2,329 for the average household — a striking degree of economic benefit.

This $2,329 figure has subsequently appeared in hundreds of news stories about Wal-Mart. It forms the backbone of the primary argument advanced by Wal-Mart supporters, who contend that the depressing effect the retailer has had on income–as a result of its low wages, impact on local businesses, and transfer of manufacturing jobs abroad — has been more than offset by its lower prices.

But a rigorous new analysis by the Economic Policy Institute (EPI), a non-profit think-tank, concludes that the GI study is “fraught with problems.” EPI identified major internal inconsistencies in GI’s figures and found that the firm’s statistical analysis “fails the most rudimentary sensitivity checks.”

“Once we addressed these weaknesses,” the EPI authors conclude, “the statistical and practical significance of Wal-Mart’s price effects effectively vanished.”

The EPI analysis debunks the GI findings on two fronts. First, the authors note that the GI figures are internally inconsistent. The GI study concluded that Wal-Mart’s expansion between 1985 and 2004 reduced the price of goods by 4.2 percent and lowered overall prices (as measured by the Consumer Price Index) by 3.1 percent. But services (such as rent, transportation, and utilities) that Wal-Mart does not provide account for 60 percent of the CPI. Even if Wal-Mart lowered the price of goods — the other 40 percent of the CPI — by 4.2 percent, the overall savings would amount to 1.7 percent, not 3.1 percent.

Second, the EPI authors replicate GI’s methodology and subject its statistical analysis to a series of tests. They conclude the GI findings fail to “survive rudimentary checks for robustness,” explaining:

“By progressively adding independent variables to the model’s specification, we track how the “Wal-Mart coeficient” (i.e., the impact of Wal-Mart expansion, all else equal, on consumer prices) changes. A general rule for judging the robustness of an econometric finding is that it should remain statistically and economically significant even as other independent variables are added to a regression specification. The Wal-Mart coeficient fails this test. As other independent variables are added, it invariably loses significance, shrinks in magnitude, and becomes so unstable that it often fiips from positive to negative.”

The EPI authors further tested GI’s findings by tracking changes in consumer prices year by year for the study period. (Global Insight only examined prices for the base year, 1985, and the final year, 2004, and excluded data from all of the years in between.) They explain:

“Correctly measured, Wal-Mart’s impact on four CPI indices (including nondurable items, the bulk of Wal-Mart’s sales) was negligible throughout our panel observations. The most complete models identified greater change in food prices during years prior to growth in Wal-Mart stores, rather than the actual time of expansion and subsequent years, making the causal argument that Wal-Mart entry drives down. . . prices hard to sustain.”

In addition to refuting the GI findings, the EPI authors examine two other studies of Wal-Mart’s impact on consumer prices (one by Jerry Hausman and Ephraim Leibtag and another by Emek Basker), concluding that, while their approaches are sound, their findings are commonly misrepresented, improperly used, and exaggerated.

They also review studies on Wal-Mart’s impact on wages, noting that the company’s depressing effect on income has made it harder for families to afford housing, health care, transportation, and education. These items, which have undergone substantial price increases in recent years, account for a much larger share of the average family’s budget than the consumer goods sold at Wal-Mart.

Finally, the EPI analysis notes that Wal-Mart’s profit margins are not as thin as many imagine and calculates that the company could provide its employees with a substantial wage increase with little or no impact on prices. 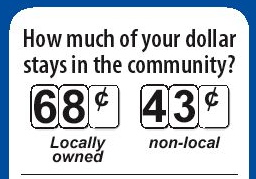