For years, chain retailers have exploited a loophole present in the tax laws of about half the states to escape paying billions of dollars in state income taxes. Efforts to close these loopholes have faced an uphill struggle, but the momentum may finally be shifting, thanks to research that has exposed the extent of the problem and its primary corporate beneficiaries, as well as new activism by independent business owners, who are breaking rank with powerful business groups to call for tax fairness.

About half the states have a flaw in their business income tax laws that national chains are using to escape paying their state taxes. This loophole saves large retailers billions of dollars every year and puts independent businesses at a competitive disadvantage.

Essentially it allows a chain to reduce the amount of profit shown on its state tax return by transferring income to an out-of-state subsidiary. Wal-Mart, for example, has a subsidiary that owns its buildings. It pays “rent” to this subsidiary and then deducts the rent as a business expense, rendering it tax-free in those states that allow this type of accounting scheme.

Other companies known to have exploited this loophole include Toys R Us, Home Depot, Lowe’s, Staples, The Gap, and Victoria’s Secret.

While it is impossible to determine exactly how much of their state tax obligations chain retailers are evading in this manner, an analysis by Citizens for Tax Justice estimated that Wal-Mart’s tax avoidance schemes cut its state tax payments nearly in half between 1999 and 2005, saving the company $2.3 billion.

Overall, corporate income taxes have fallen from about 10 percent of state tax revenue in the late 1970s to only 5 percent today.

Lacking out-of-state subsidiaries, independent retailers are unable to shield their earnings from state income taxes. Instead, they, along with individuals, end up shouldering higher tax obligations in order to make up for declining revenue from large corporations.

How has such a grossly unfair policy persisted for so long — particularly in a country where politicians of virtually every political stripe extol the virtues of small business?

Much of the answer lies in the fact that business groups that purport to speak for their small business members are in fact pushing a big business agenda, even when what’s good for big business is so obviously detrimental to small.

In Pennsylvania, for example, the Pennsylvania Chamber and the state chapter of the National Federation of Independent Business (NFIB) have successfully fought several attempts by Governor Ed Rendell to close this loophole, even though his plan called for using the new revenue to finance an across-the-board cut in the business income tax rate.

Across the country, chambers of commerce and, often, state chapters of the NFIB, have come out against proposals to level the playing field for independent businesses.

They commonly argue that not allowing corporations to utilize these accounting schemes would undermine the “business climate” in their states and impede economic growth.

But an analysis by the Massachusetts Center on Budget and Policy Priorities found that states that had this loophole had slower rates of employment growth than those without it. The U.S. Small Business Administration has also reported that states with the loophole have lower rates of entrepreneurship and concluded that the “tax climate” in these states was not as favorable to small businesses. 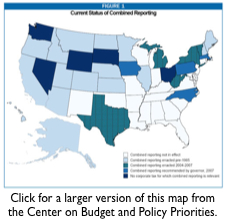 Signs of a Shifting Tide

In 2004, Vermont became the first state in more than two decades to close this loophole by adopting a tax code provision known as “combined reporting.” Combined reporting requires that companies combine profits from all related subsidiaries before determining their income tax liability. This ensures that earnings shifted to out-of-state subsidiaries are counted for tax purposes.

Although passing combined reporting remains an uphill fight in most of these states, the issue has gained much more traction in recent years. Much of the credit for that shift is due to the work of the Center on Budget and Policy Priorities and its state affiliates, whose research and advocacy have greatly expanded awareness of the problem, as well as to reporting by the Wall Street Journal, which published an eye-opening expose on Wal-Mart’s use of the loophole in February 2007.

Another key factor behind the momentum for combined reporting in some states has been the increasingly visible support of independent business owners.

Although a combined reporting bill introduced four years in a row in New Mexico still remains unlikely to pass this year, it did gain more co-sponsors and received its first positive vote out of the Business & Industry Committee.

Support and testimony provided by members of the Santa Fe Independent Business and Community Alliance was a key factor in that progress, according to Bill Jordan of the New Mexico Fiscal Policy Project.

“In the past, big business has been the only voice at the capitol. This year, when you had all of the big business lobbyists stand up and oppose combined reporting, you had a lot of small business owners standing up and saying, We’re getting screwed,” Jordan said. “For legislators, instead of seeing the business community as united, they saw they were very divided and that this was a more complex issue.”

In Massachusetts, where a combined reporting bill has a fair chance of passage this year, fairness for local businesses has emerged as one of the most potent arguments for it. In December, a study commission established by the state legislature reported, “These tax avoidance methods are especially unfair to Massachusetts-based smaller businesses, which do not have access to sophisticated tax planning techniques or the opportunity to use them.”

The Massachusetts Public Interest Research Group (MassPIRG), Businesses for Shared Prosperity, and Neighbor to Neighbor, an advocate for low income communities, have recruited about 100 local business owners to sign letters of support and testify in favor of closing the loophole.

Organizing these business one-by-one has been very time-consuming, however. Meanwhile, the state’s established business groups, including the state chapter of the NFIB and the Massachusetts Chamber of Commerce, have sided with the interests of large, multi-state companies.

In Maryland, independent business owners are also beginning to speak out. “As an organization of small business owners, we want a level playing field. It’s not fair that big multi-state companies that are already a threat to our survival should get away with not paying the same taxes that local businesses have to pay,” said Keith Losoya of the Chesapeake Sustainable Business Alliance.

“Often what happens is that the Maryland Chamber likes to speak on behalf of all businesses, but they don’t,” he added. “We wanted to let our legislators know that they don’t represent us.”

In Iowa, Governor Chet Culver is building a case for combined reporting much the same way Vermont Governor Jim Douglas did four years ago, by focusing on how leaving the loophole open undermines Iowa’s local businesses. “It’s not fair that a hardware store across the street from Wal-Mart has to pay that tax and the billion dollar corporation doesn’t,” he declared.

Hoping to counter opposition from the Association of Business & Industry and a number of local chambers of commerce, the Iowa Policy Project and Iowa Human Needs Advocates organized a press conference in late February that featured small business owners talking about the need for combined reporting.

To find out if you state is among the 25 that have not adopted combined reporting and are therefore vulnerable to tax dodges by big retailers, visit the Combined Reporting page of our web site. We encourage you to get involved. To find organizations advocating for combined reporting in your state, visit the State Fiscal Analysis Initiative. 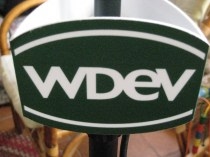 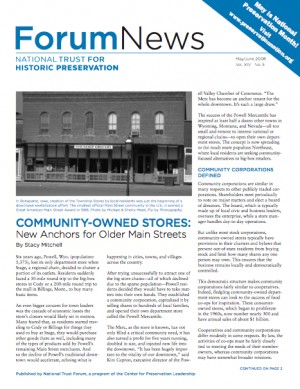