Continued use of methane gas to heat homes and businesses exposes customers to financial volatility, fatal explosions, and adverse climate impacts. Early alternatives, like air source heat pumps, work technologically, but can create unintended consequences of leaving customers stranded on an aging and costly gas distribution network. Instead, communities have a local energy resource — thermal energy in the ground — that can be tapped to affordably and safely deliver low-carbon heating and cooling, and avoid unintentional stranding of the most vulnerable customers or unintentional costs to the electric grid. A successful transition to local, clean, and affordable energy for buildings requires collective action.

In October, ILSR submitted comments to the Minnesota Public Utilities Commission in its landmark “Future of Gas” docket. In these comments, ILSR argues that there is no future for gas in Minnesota but that we have alternatives, such as networked geothermal, that can provide an equitable transition to a clean and affordable energy future.

RE: Docket Number: G-999/CI-21-565 / In the Matter of a Commission Evaluation of Changes to Natural Gas Utility Regulatory and Policy Structures to Meet State Greenhouse Gas Reduction Goals

The Institute for Local Self-Reliance offers these comments to emphasize the need for a collective solution to a collective problem with natural gas use in Minnesota, with some recommendations for the scope of this docket.

The problems of ongoing gas use are well known to the Commission:

The July 2021 study, Decarbonizing Minnesota’s Natural Gas End Uses, reviewed a number of potential thermal energy scenarios focused on technology deployment, including hybrid electric and renewable gas as well as full electrification. The hybrid approaches offered fail to protect customers from the price volatility and safety risks of gas use in buildings. Alone among the options, the “high electrification” scenario addresses all three of the liabilities of continuing reliance on widespread use of natural gas for residential and commercial building heating. But that scenario (and the study in general) assumed a path of individual action that is in contrast to our existing urban building heating system.

The natural gas network is a collective and socialized method of meeting urban heating needs. Its replacement must embrace the same characteristics.

The July 2021 study highlighted the costs of failure to embrace collective action. Widespread, uncoordinated adoption of air-source heat pumps (with electric backup) could require a near doubling of peak electric demand capacity by 2050. If deployment follows other technology adoption curves, it may also result in dramatic inequality, with wealthier (and whiter) households shifting to heat pumps while remaining gas network customers pay ever-higher fixed costs to maintain an underutilized network. It’s the myth of a rooftop solar cost shift made real; a gas utility death spiral. By failing to align electrification with decommissioning of the gas network, the study warns, customers will pay substantially more for both fuels (and exacerbate existing energy burdens and inequalities).

There’s an alternative approach that can address the unintended consequences.  Pioneered by a nonprofit in Massachusetts called HEET, “geothermal micro districts” (or “networked geothermal”) create a neighborhood of heat pumps, each connected to a common network of underground pipes that tap into the earth’s constant underground temperatures. Such a system can be supplemented by other thermal sources from groundwater, aquifers, etc. It offers several advantages.

First, ground- or water-source heat pumps are far more efficient than air-source ones, especially at low temperatures. If Minnesota and other cold-climate states want a low-carbon heating system that avoids dramatic peak demand impacts on the electricity system, then networked geothermal is a crucial component. Second, networked geothermal requires building a collective and coordinated system that mimics the gas distribution system. It offers the opportunity to decommission the legacy gas system as it replaces it. Third, it offers a smoother transition for the gas utility workforce, as the skills needed to build networked geothermal are very similar to those needed to maintain a gas network. Fourth, it can smooth the financial transition because a gas utility investing in networked geothermal can have a common rate base for both networks. Finally, as a new form of thermal utility, geothermal micro districts or networked geothermal allows communities and states to set the terms of the market before incumbent gas or electric utilities replicate the gas system’s economic and environmental injustices.

Full electrification alone among technology approaches addresses the three problems of ongoing gas use. It has only the emissions associated with electricity use (on track for many Minnesota utilities), has zero fuel costs and relies on more stable electricity rates, and has zero risk of carbon monoxide poisoning or explosion. But without coordination and with reliance on individual air-source heat pumps, it may prove costly due to peak electricity demand impacts, and it may unduly burden customers without the wherewithal to fuel switch.

The Commission’s aim should be broader than the “future of gas.” It  should embrace the most cost-effective and equitable “future of building energy.” This would include:

It would be easy to use this docket to focus on the Commission’s oversight of existing gas utilities and the tweaks to incumbent business models, but Minnesota customers need more. This docket must articulate to regulated gas utilities (and the nascent thermal utility market) that there is no future of gas for domestic heating that can meet the Commission’s objectives and address the climate, cost, and safety risks to customers. 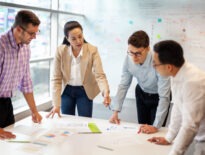 Energy How Cities Can Make the Most of IRA Dollars — Ep…