MI-Connection, the North Carolina community-owned network serving Davidson, Cornelius, and Mooresville, is upgrading network speeds and unveiling a new marketing campaign. MI-Connection was formed when a few towns north of Charlotte purchased the old, dilapidated Adelphia cable network out of bankruptcy and began rehabbing it.

The company on Dec. 10 will begin selling a new top speed internet service tentatively called “Warp Speed Broadband,” though the name could change. It will offer 60 mbps downloads and 10 mbps uploads. Customers can get it for $80 to $100, depending on whether they bundle it with TV and telephone.

Notice that this community network offers faster upstream speeds than most privately owned cable networks -- because they recognize the importance of empowering subscribers rather than hoping they will just consumer video and do little else.

The financial report for the quarter that ended Sept. 30 showed that the company grew revenues in all three of its businesses – cable TV, telephone and internet. Altogether, revenues were up 6.5 percent from the first quarter a year ago, to $4,114,992. Expenses fell 8.7 percent, in part because of savings on what the company pays its high-speed internet providers.

The company’s earnings from day-to-day operations continued to grow.

A new marketing plan, dubbed "Straight Talk," will appeal to local ownership and include slogans like "If you owned a grocery store, wouldn't you shop there?" "Can you create jobs just by watching TV?" and "When your boss is everyone in town, your customer service had better be good." It will be interesting to see whether or not the appeal to community spirit helps increase subscribership.

North Carolina law is especially hostile to community owned networks and MI-Connection has struggled financially, in large part due to how poorly Adelphia (a private company) had maintained essential components. Competitive attacks from Time Warner Cable have aggravated the situation. StopTheCap reported in April that, in a rare instance of private overbuilding, the cable giant has begun serving the area and appears to be making a competitive grab for MI-Connections customers.

The situation has been difficult for MI-Connection but great for all consumers in the region. From the Stop The Cap article:

Other residents in nearby Cornelius are also getting prices substantially lower than residents in cities like Charlotte, where many residents have one choice for cable: Time Warner.

Sam, a Stop the Cap! reader in the Morrison Plantation neighborhood, noted they skipped the last few rate increases from the cable company.

“You just call and tell them the rate is too high and as soon as they find out you have MI-Connection as an alternative, they lower the price,” he said. “My niece in Charlotte can’t get the same deal even when we gave her the details — it’s only good in areas where MI-Connection operates.”

That leaves Charlotte residents paying $35-50 more a month than savvy customers further north can have for the asking.

Once again we find that competition improves affordability, even in a state with some of the toughest restrictions.

Sam, quoted in the StopTheCap article makes an astute observation about the cable company's agenda:

“It seems pretty clear to me that Time Warner isn’t hurrying to compete with Comcast or Charter — just MI-Connection and that makes me suspicious,” Sam says. “After spending all that money to ban community broadband in the state, they now seem to be trying to drive out of business the handful of companies that were exempted.”

“My niece is probably paying for this right now on her cable bill too, and once MI-Connection is out of the way, those prices will shoot right back up,” Sam concludes.

Link:
Stop the Cap! Has Additional Coverage of this Story 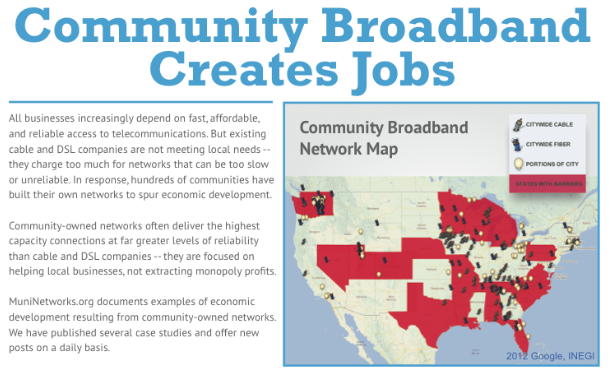