Pay As You Throw (PAYT) a proven global waste metering system is the vital first step to reaching Zero Waste. For all those municipal leaders that have made a commitment to reducing waste, but have not yet implemented PAYT, it’s time to move from stagnant to progressive recycling based on how residents pay for trash.

Pay As You Throw, or unit-based pricing, is the single most effective way to educate and motivate residents to reduce, reuse, recycle and compost. After all, what is the difference between unit-based pricing for electricity, water and/or natural gas in our households and doing the same for garbage? It is fair. Why should frugal recycling families subsidize wasteful households? This is important for low-income residents as households can monitor and reduce their costs and get spendthrift households off their backs.

+ PAYT programs are a boost to back yard and community scale composting which reduces the volume of material landfilled or incinerated and puts valuable nutrients back into the soil. Further, for every 10,000 households composting at home, between 1,400 and 5,000 tons per year could be diverted from curbside collection with potential savings in avoided disposal costs alone ranging from $72,000 to $250,000.[2]

+ A recent study from MIT concluded, “A notable factor that predicts adoption of curbside food-scrap recycling, other things being equal, is the existence of PAYT trash collection. This strongly suggests that such programs get residents in the habit of actively managing their trash disposal in response to financial incentives — and, as such, makes it seem less burdensome to separate food from other kinds of trash.”[3]

+ PAYT pays off in budgetary savings. Decades of operational research prove PAYT is a sound fiscal and environmental policy decision. In New England, there are over 500 existing programs that have successfully reduced trash volumes and saved those communities money. A report just released about the impact of Pay-As-You-Throw systems on residential trash collection in Southern Maine offers further validation based on 2017 collection data from 20 communities. In a head to head comparison PAYT cities had 356 lbs per capita of waste vs. 645 lbs per capita in cities without PAYT and lower trash volumes mean lower disposal costs.[4] Worcester, MA saved $10 million in avoided incineration costs since 1993 when it implemented PAYT. 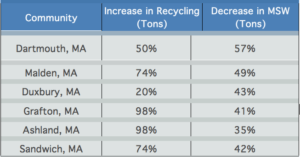 Data gathering is critical but data interpretation is key.  For the most part municipalities only have direct control over the residential waste generated from single-family homes (4 units attached and under), so it’s important to track the residential sector separately from other waste, in order to benchmark the success of any given program. Surveys by consultants often do not go deep enough to determine actual impacts of various waste reduction initiatives by stream or sector, which is misleading. Using diversion rates based on a random year, assigning municipal reuse credits, measuring set out rates, or relying on recycling rates does not provide a consistent standard because waste stream materials are constantly evolving and home composting as well as many reuse streams cannot be accurately tracked. It’s critical to track what is still being disposed.

Unreliable data interpretation can lead municipalities down the wrong path resulting in unnecessary expense. Residential per capita disposal is the most reliable metric as it gives the most realistic picture of what volume of trash a residential collection systems produces regardless of size.  A comparison of systems using this performance metric provides clear evidence that a PAYT pricing system is the single most effective way to reduce residential waste. That said it is important to understand that not all trash-metering programs are equally effective.

Of the 7,000 towns and cities US EPA categorizes as PAYT only an estimated 2,000 have the features that are needed for success. Most have a variable price system, but in many cases the  differential rates do not provide sufficient incentive to change behavior and purchasing habits. Researchers sometimes assume that just because a city has a tiered pricing system it will reduce trash. However, when tiered systems are not priced correctly it can have the opposite effect where residents are prompted to select a larger container because it seems like a better value. 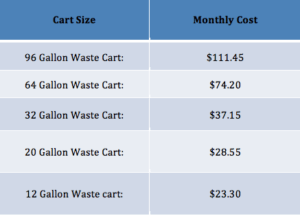 Rates have to be proportional. If you reduce your waste by 2/3rds by recycling, backyard composting and donating to charities or thrift stores the price structure, should reflect this effort through savings. When rate differentials are not proportional, waste reduction programs have little if any impact. Whereas, proportional programs provide better waste reduction like in Seattle where monthly differential cart rates (see below) for residential services are quite dramatic.  One of the best performing systems of this type is Seattle.  Its residents throw away 369 lbs of waste per capita and have access to weekly curbside recycling, yard waste and food scrap collection. 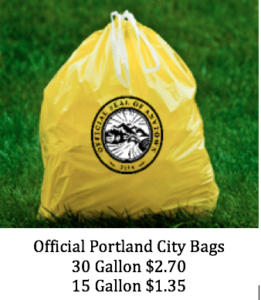 An example of an even higher performing system is the east coast City of Portland, Maine, which ranked number one in ILSR’s research.  Portland uses a bag based PAYT system and throws away just 268 lbs. of waste per capita while also offering weekly recycling and seasonal yard waste collection to its residents. Portland Maine’s bag-based system uses a 15-gallon bag priced at $1.35 per bag and a 30-gallon bag priced at $2.70 per bag.

The gritty industrial city of Worcester, MA which uses a bag as the unit base has lower residential per capita waste generation than Austin Texas or Berkley CA where a cart is used as the unit base. Of the 37 municipalities that ISLR reviewed 14 were programs where the cart size acts as the metering unit (averaging 475-568 lbs. of waste per capita depending on if regular curbside food collection was available) and 10 were programs where the bag size acts as the metering unit averaging 344 lbs. per capita disposal. 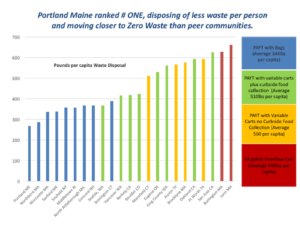 + Problems with unit-based pricing are either non-existent or easily overcome based on extensive experience in jurisdictions across the US. PAYT implementation requires careful planning to address the pricing mechanism per unit of trash (bag or cart fee), the physical conversion to the new system, which includes distribution of bags or carts, and a proactive public education campaign. [6]

+ It is a common practice of nearly every city in America to establish collection standards and establishing rules for PAYT program is no different.

+ Existing enforcement procedures are deployed, generally with no increase in costs when transferring to a PAYT system. PAYT may require a conversion period but does not require additional staff for enforcement. Most communities easily reach 98% compliance after the initial implementation period.

+ Illegal dumping is not a major barrier. The National League of Cities reports “There are usually concerns that PAYT programs will lead to an increase in illegal dumping. However, most PAYT communities have found this not to be the case especially when PAYT is promoted alongside other legal methods of waste disposal, such as curbside recycling and yard trimmings composting.”[7] Gedert concludes,” illegal dumping is a transitory issue that should not prevent a community from benefitting from the long-term positive effects of PAYT.”

+ Low Income residents are allegedly adversely affected by a unit-based system. Yet these systems have shown to work well to help households control costs. Municipalities can transition to unit-based systems with reduced rates or free bags for low-income residents. Most communities offer education in low-income communities, as an opportunity to reach out to these residents with other city services. Bags are a more transparent, equitable system where the renter population is high because the tenant is deciding how much they pay based on bag size each week, instead of having a landlord choose a large container and burry the cost in the rent.

+ Administration of programs can have some cost. In bag programs the cost of distribution and billing are typically absorbed by the manufacturers and calculated into bag fees yielding limited additional management expense for cities. Many retailers and grocers will offer the sale of the bags at no upcharge to the city, as a goodwill program. If the city chooses a cart program there are some additional administration fees because all households must be billed regularly for their selected cart size, and cart inventory must be available to switch out for smaller and larger carts as residents move and additional waste reduction programs become available.

In conclusion, it’s clear that a trash metering system incentivizes residents to think twice about what materials can be reduced reused and recycled. When families pay for only what they generate their behavior change not only saves money at home but moves valuable resources out of the waste stream and into the supply stream creating regional jobs and promoting a circular economy, and significantly reducing their carbon footprint.

[6] Correspondence with Bob Gedert, former director of the Austin, TX Department of Resource Recovery and that city’s Zero Waste program.

Metering Residential Garbage Can Pave the Way to Zero Waste 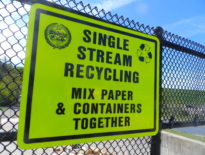 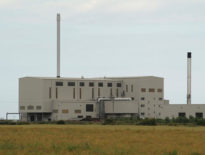