Congratulations on your historic election. Now the truly heavy lifting begins. You have declared your intention to make “a new energy economy” your “No. 1 priority.” We urge you to follow a path that leads not only to changes in the fuels underpinning our energy system but also to changes in the structure and dynamic of that system.

You have promised a shift from fossil fuels to renewable energy. The key distinguishing characteristic of renewable energy, its virtually universal availability, offers you and the country an unprecedented opportunity to decentralize and democratize our energy system.

Dispersed and distributed generation will, of course, be an element of any energy initiative. We think it deserves to be its core and guiding principle. The potential is enormous. A recent study by the Institute for Local Self-Reliance (ILSR) estimates that half the states could be energy self-sufficient by harnessing renewable energy within their borders while all states can satisfy a considerable fraction of their energy needs. Where necessary, on-site natural-gas fueled heat and power systems can back up and supplement renewable energy. 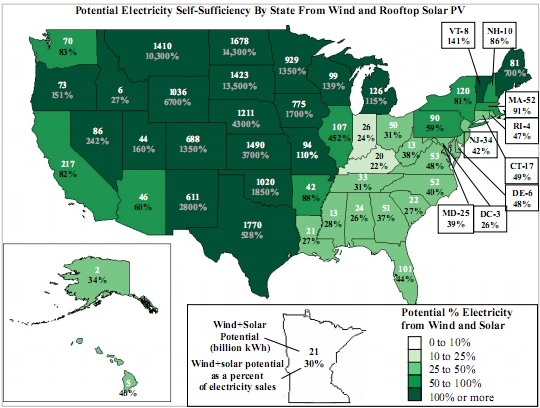 It will not be easy for a President or a Congress to make decentralized energy the centerpiece of an energy strategy. National governments naturally think in terms of big national initiatives. Moreover, the federal government has clear authority over interstate energy networks but limited authority over in-state and local energy systems. Therefore, your advisors may tend to favor a strategic framework that emphasizes large scale, centralized renewable power plants located in a handful of states and the construction of a national transmission system to distribute that electricity to the rest of the nation.

In your professional and personal lives, you and the First Lady-elect have long worked to build strong, engaged, and self-reliant communities. A decentralized energy policy can extend and deepen this work, for it makes communities active partners rather than passive observers.

A bottom-up energy policy will tap into more than a decade of vigorous energy-related activity at the local and state levels. Indeed, a persuasive argument can be made that virtually all of the advances in renewable energy in the last 15 years have come from the bottom-up. States have dramatically upgraded their building codes to encourage energy efficiency. Many states have painstakingly evolved electricity regulatory frameworks that emphasize efficiency, renewables, and distributed generation. We should keep in mind that while Congress debated a national renewable electricity standard, almost two dozen states enacted or expanded renewable energy mandates that collectively will generate more renewable electricity than the proposed federal mandate. Over 900 cities have committed to reducing city wide greenhouse gas emissions as signatories of the U.S. Mayors Climate Protection Agreement.

A bottom-up energy policy can tap into the inherent self-interest of communities in a new energy economy. Decentralized energy generation creates local jobs, keeps money in the local economy and creates a pool of homegrown expertise that can be exported to other parts of the country and globe. The number of jobs created by rooftop solar are similar to the number of jobs created by centralized solar thermal power systems, but the former are local jobs that strengthen the local economy while the latter largely consist of imported labor with little if any lasting impact on the local area.

A bottom-up energy policy can avoid the pitfalls of a one-size-fits-all energy policy that is inappropriate for a nation characterized by such a diversity of climates, population densities and renewable energy sources.

A bottom-up energy policy is not only helpful but it is also essential because much of what needs to be done to reduce our dependency on fossil fuels must be addressed using local and state authority. This includes authority over energy facility siting, building codes, land use, and traffic patterns.

Ultimately any federal energy policy must be implemented at the local and state level. This will be done successfully and quickly only if communities become active and sympathetic partners in shaping that energy policy and the resulting infrastructure. A federal policy that emphasizes centralization and preemption (e.g. preempting state and local authority over new high-voltage transmission lines or over liquefied natural gas terminals) will burden and possibly undermine that working relationship.

An informed and engaged citizenry

Decentralized energy generation can make households and businesses, schools, and institutions producers of energy. The more this occurs, the broader and stronger the constituency for renewable energy becomes. The advent of consumers-as-producers fosters a useful energy and economic dynamic. When people own a part of their energy supply, they tend to work to maximize the value of that supply. One way is by maximizing their overall energy efficiency because the less energy one consumes, the more independent one becomes. The other is to seek out valuable non-household uses for that energy supply. For example, those with solar rooftops are major supporters of electrified vehicles while those with electrified vehicles are major supporters of decentralized electricity.

An emphasis on dispersed energy generation and maximum energy efficiency could avoid unnecessary investments in centralized energy systems, long-distance high-voltage transmission networks, and costly transportation systems. It will give us time to better understand and integrate the remarkable technological advances now occurring in the energy field. Dramatic improvements in lighting, motor, and building-envelope efficiency allow us to gain increasingly amounts of useful work from a given unit of energy, significantly reducing our need for new power plants. At the same time engineers are learning how to extract ever-more energy from slower moving air and water molecules from the earth’s heat and sunlight. Rapid advances in energy storage technologies, just in the last 12 months, could have a profound impact on the potential for intermittent renewable fuels. Smart grid systems are coming online that enable a two-way grid system and a more intimate relationship between the energy customer and the grid.

We shouldn’t rush into potentially spending hundreds of billions of dollars to build a centralized renewable energy future when technological developments may eventually strand that investment.

Buildings consume more than 40 percent of all energy. The federal government owns some 450,000 buildings. Virtually every town has scores of federal buildings nearby. These buildings would be required to use no more energy on an annual basis than is provided by on-site renewable energy sources. They would become models for all communities and the training ground for the nation’s architects, engineers, and builders to gain an expertise in efficient and energy self-reliant construction.

Sufficient capacity is available on existing subtransmission and distribution lines to interconnect potentially hundreds of thousands of additional MW of distributed renewable power. Building a new transmission network would enable new coal-fired power plants and undermine an effective working relationship with local and state governments by generating widespread popular opposition. Focus on upgrading the existing grid into a network that can integrate hundreds of thousands of new small power plants and create a more intimate relationship between energy consumers and producers.

The most important stumbling block to renewable energy systems(wind, solar, geothermal) is their high initial cost. The federal government can overcome this obstacle by offering long-term loans at low but unsubsidized rates. Such financing would allow communities to maximize rather than optimize energy savings and capital-intensive renewable energy technologies to compete with fossil-fueled generators that have lower initial costs but higher lifetime costs. Federal financing should be extended only to communities that commit themselves to a bringing on a significant volume of renewable energy and/or energy efficiency and should be matched by local or state financing.

Local ownership gives a community a real stake in renewable energy generation. It also generates three to 10 times more local economic benefits than absentee ownership. The federal government should eliminate its current bias against locally-owned energy projects. One strategy would be to convert the current renewable energy production tax credit into a refundable tax credit. All states should be required to seriously explore the use of Feed-in Tariffs, long-term premium priced contracts for renewable energy projects interconnected with local utilities.

The combined storage capacity of millions of electrified vehicles can also enable intermittent, distributed renewable power to become a much greater percentage of our future electricity system. Aid to car companies should be conditioned on the majority of funds being used to make cars with a minimum electric-only driving range. Pledge to make electrified vehicles at least half of all federal vehicle purchases in 2012. The $7,500 tax credit for new electrified vehicles should be extended to retrofits.

Memo to President-elect Barack Obama on Democratizing the Energy System