Green Isle and nine other communities have reaffirmed their commitment to the RS Fiber Cooperative, reports the Belle Plain Herald. The project began in 2010 as a collaboration between a number of local county and municipal government entities in south central Minnesota. Local residents rallied behind the project, which was designed to connect both towns and surrounding farms.

Unfortunately, the project faced difficulties due to incumbent intimidation and the high cost of deployment in such a large geographic area. Sibley County officials chose to back out of the project, requiring a business plan reboot. Locals, recognizing the critical need for better connectivity chose to instead form the RS Fiber Cooperative.

The Herald reports that in its first 2015 City Council meeting, Green Isle voted 3 - 1 in favor of a resolution stating continued support to the project. Similar resolutions have passed in Winthrop, Gibbon, Fairfax, Lafayette, Gaylord, Stewart, New Auburn and Brownton.

Henderson and Arlington, located in Sibley County, have opted to not participate in the coop.

Coop Directors endorsed an updated business plan in November, reported Prairie Business Magazine. The project will bring better connectivity options to approximately 6,200 customers in Sibley County, parts of Renville County, and portions of Nicollet and McLeod Counties. The revised business plan, scaled back from the original plan to bring fiber to every property in Sibley and Renville Counties, reduces project costs by more than 30 percent.

Participating communities will collectively issue $13.7 million in general obligation bonds. Local investors, bank loans, and other financing will provide the remaining $42 million. The project is scheduled for completion in 2018.

"It levels the playing field for people who live and work in rural America with people who are in the twin cities. So it's an economic development tool for south central Minnesota."

Readers who have followed this project will recall that south central Renville and Sibley counties, largely farming communities, have faced many challenges since the project inception. The rural nature of the region increased the cost of deployment but the community wanted to include every one. Incumbent Frontier negatively impacted the project by injecting fear into several local leaders, which complicated the ability to fund the project. Nevertheless, the intense interest and community involvement has kept this project moving forward.

For a detailed look at the RS Fiber Cooperative story, read our case study in All Hands on Deck: Minnesota Local Government Models for Expanding Fiber Internet Access.

You can also listen to our May 2014 podcast interview with Mark Erickson, Winthrop Town Manager, and Cindy Gerholz, RS Fiber Coop Vice-Chair. We also spoke with Linda Kramer from the group's Marketing Committee back in 2012. 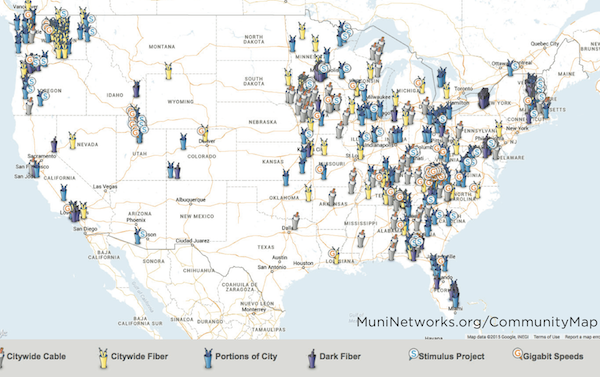