In early November, millions will go to the polls to cast votes in this year’s midterm elections. In addition to electing candidates, some voters have a unique opportunity to directly shape their local energy system.

In Portland, Ore., a municipal ballot measure would create a new fund for an equitable transition to 100 percent renewable energy. Statewide initiatives in Washington, Colorado, and several others, would strengthen state authority to combat climate change and its impacts, as well as powerful incumbent fossil fuel companies and electric utilities. Such measures advance energy democracy in important ways at the state and local levels.

Drawing on recent coverage from the Climate Advocacy Lab and other sources, we summarize key details of these ballot initiatives, below.

In what is known as the Portland Clean Energy Initiative, a diverse coalition of grassroots organizations and residents in Portland, Ore., have put a “first-of-its-kind” measure on the city’s municipal ballot that could raise $30 million annually for its efforts to transition to 100 percent renewable energy by 2035. In the proposed policy, the city would levy a one percent surcharge on large retailers doing business in Portland — such as Walmart, Comcast, and others — that make more than $500,000 in local revenue and $1 billion nationally.

Want to hear more stories about how communities are working toward 100 percent renewable energy commitments? Tune into the new Voices of 100% series from ILSR’s Local Energy Rules podcast. In next week’s episode, we’ll feature an in-depth conversation with local leaders about the Portland Clean Energy Initiative.

A central focus of Portland’s ballot measure is both racial and economic justice. Communities of color and low income residents disproportionately experience the worst effects of climate change and have historically been left out of the decision-making process when it comes to energy. This local ballot measure would help ensure these communities in Portland benefit most from the savings and jobs that will accompany the city’s transition to local, clean energy.

Find other examples of how cities, such as Boulder and Minneapolis, have used their local authority to finance local, clean energy initiatives in our interactive Community Power Toolkit.

A ballot measure in Washington state, known as Initiative 1631, provides voters with a aggressive tool to reign in the state’s largest emitters of greenhouse gases and stem climate change. Through a carbon fee mechanism, the proposed policy would require major polluters, such as the fossil fuel industry, to pay an initial $15 per ton of carbon dioxide released into the atmosphere starting in 2020, and the fee pegged to inflation would increase by an additional $2 each year. This would levy millions of dollars each year that Washington would then use to support local investments in solar and wind power, public transit, and energy efficiency.

“I’m going to do everything I can for it. I’m hoping others will join me, because it really is a very well-balanced, thoughtful policy,” explains Washington Governor Jay Inslee, on his support of Initiative 1631.

Strong support from the “largest coalition the state has ever seen” that includes business, labor, and environmental groups, tribal nations, and communities of color, according to a Climate Advocacy Labs analysis, in addition to public support from Washington’s Governor Jay Inslee and other high-profile figures including Bill Gates, illustrates the importance of broad coalitions in advancing state climate policy and ballot initiatives. The “extraordinary organizing of front-line groups” coordinated through the organization Front and Centered “has carried 1631 this far,” notes coverage of the initiative in Vox.

Residents of Colorado, a state well-known for its extensive oil and gas development, have the opportunity to turn that reputation on its head through Initiative 97. This statewide measure proposes a policy that would ban on oil and gas development within 2,500 feet of homes, schools, and other “vulnerable areas” to protect these areas from the harmful health effects and other risks that accompany these drilling sites, including climate change impacts. The policy would effectively prevent new fossil fuel extraction on a majority of the state’s land surface area and an estimated 85 percent of the state’s non-federal land, according to Climate Advocacy Labs.

In response to the monopoly utility’s efforts to curtail customer-owned solar and slow-walk renewable energy, Nevadans have Question 3, a ballot measure to introduce competition into a previously one-player-only electricity market. A core theme in the “Yes on 3” is the incumbent utility’s use of its political influence to resist clean energy, including rooftop solar.

In addition to these high profile initiatives in Oregon, Washington, Colorado, and Nevada, other statewide measures and proposed state constitutional amendments will give voters opportunities to strengthen renewable portfolio standards (such as in Arizona with Proposition 127 and Nevada’s Question 6) and advance other clean energy goals.

Additional analyses of these and other clean energy ballot initiatives are also available from InsideClimate News, High Country News, Grist, and HuffPost News.

Ultimately, even where voters may not be weighing in directly on ballot initiatives, the upcoming midterms afford new ways to advance renewable energy and local self-reliance. In addition to making their voices heard at the ballot box, community members can demand their newly elected, local leaders support strong policies that help advance local energy solutions.

Local Clean Energy on the Ballot this November 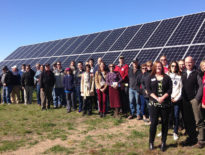