This statement is heresy in the green community, but there’s a danger that the increasing focus of green energy advocates on a new nationwide transmission superhighway may undermine the pursuit of near-term renewable energy goals.

And states have an abundance of renewable energy assets.  A new report by the Institute for Local Self-Reliance—Energy Self-Reliant States—shows that every state has the potential to meet its renewable energy goal or mandate and that 3 in 5 states could get all of their electricity from in-state renewable resources.  Almost every state could get at least 20 percent of its electricity from rooftop solar photovoltaics (PV) alone.

These renewable assets can be tapped for significant local benefits.  A single wind turbine, for example, creates $1 million in economic activity, according to the American Wind Energy Association. And that’s just a generic, utility size turbine.  Locally owned wind projects can create twice the jobs and 3 to 4 times the economic impact of absentee owned projects.

People are not so excited about new high-voltage transmission lines.

Transmission legislation moving through Congress would preempt longstanding state regulatory authority over transmission line approval and siting. The goal is to speed the construction of a $100 to 200 billion interstate transmission superhighway, bringing solar power from the Southwest and wind from the Great Plains to the coasts.

Why is this problematic?  Let’s ignore for a moment that most people wouldn’t care to live by a 150 foot tower running through a 200 foot swath of denuded landscape.  Or to have their land seized for this purpose by eminent domain.

Many states oppose the new transmission superhighway for two reasons.  One, it’s expensive.  Two, it undermines efforts to reap the economic rewards of renewable energy self-reliance.

Lawmakers should resist calls to add an extensive and costly new transmission system that would carry electricity from remote areas like Texas, the Great Plains, and Eastern Canada to places with high energy demands like Boston, Chicago, and New York … Renewable energy resources are found all across the country; they don’t need to be harnessed from just one place.

In May 2009, the governors of 10 East Coast states wrote to senior members of Congress to protest.  Requiring their residents and businesses to pay billions of dollars for new transmission lines that would import electricity from the upper Midwest and Southwest into their region “could jeopardize our states’ efforts to develop wind resources … “ They added, “it is well accepted that local generation is more responsive and effective in solving reliability issues than long distance energy inputs.”

Nine of the 10 Eastern states whose governors signed the May 2009 letter could get over 80 percent of their electricity from in-state renewable resources, according to Energy Self-Reliant States.  And local energy also means fewer legal battles over the siting of unsightly transmission towers, a fact that politicians in that region are unlikely to have overlooked.

It’s not just state energy self-reliance and economic benefits hanging in the balance. A recent study released by Duke University’s Climate Change Policy Partnership throws cold water on the renewable energy transmission passion.  It found that the proposed interstate transmission links from regions with low-cost electricity (e.g. the Great Plains) to regions with high-cost electricity (e.g. the East Coast) could enable coal power as easily as renewables, with poor results for carbon emission reductions and other environmental goals.

The evidence undermines the conventional wisdom about high-voltage, long-distance transmission and should raise red flags among advocates.  To the people in affected states, a new transmission superhighway is costly, anathema to local energy generation, and a potential enabler of coal-fired power.  It creates winners (in the sunny Southwest)and losers (in the “import states” on the East Coast).

A victory for interstate transmission may be at the expense of broader public support for renewable energy.

Renewable energy does not have to be harnessed in a few, select areas and shipped across country.  And public support for clean energy may hinge on the opposite.

The ubiquity of renewable energy means that the transition to a clean energy economy can also be a transition to a new, local energy future, where the economic and environmental benefits of powering the economy are everywhere the sun shines.

A little heresy on transmission 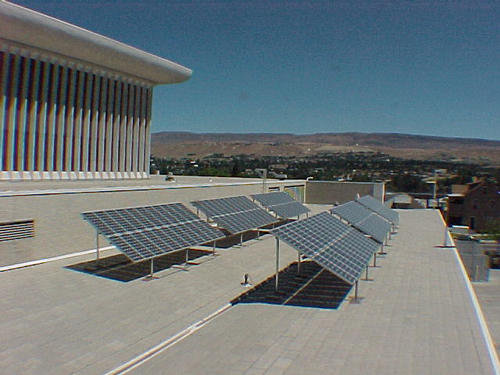 Energy Satellite photos of Austin, TX, show it could meet…