If the incineration industry does not tie up 20 year contracts for large supplies of municipal garbage soon, they will fade away as a threat to the economic and environmental sustainability of US cities and counties. The cost of incineration is escalating as the cost of recycling, composting and reuse decline. With the penetration of recycling and composting infrastructure through out the US, the window of opportunity for incineration irreversibly closes. After all, it costs the same to pick up recyclables and organics as it does to pick up garbage. But, in one case you have a resource, in the other you have garbage to dispose of.

The cost of incineration is far beyond the means of communities. The cost increases from initial proposals to final submissions of proposals are Kafkaesque. In St Lucie County, FL, a plasma arc company promised officials that costs would be no more than $35 per ton. The final proposal was so much higher, officials dropped the project immediately. In Frederick County, MD, the price tag for a 1500-ton per day mass burn facility, jumped from $235 million to $525 million within two years. The current estimate does not account for the service fees in addition to the capital outlay. Note that when a community issues bonds for $500 million the true cost is $1 billion over 20 years. In Montgomery County, MD, an incinerator that is working well, still has a net cost to the county of $40 million a year; paid for by a surprise household surcharge

There is also the added financial risk of operational failures, as well as more demanding air and ash emissions regulations. A plant in Harrisburg, PA almost bankrupted the city because of these pitfalls. Detroit currently pays $156 per ton to burn garbage. A small plant in Dutchess County, NY has seen the county subsidy for the plant go from $1 million annually to $6 million annually in the last three years.

In light of these realities, the incineration industry is conducting a full court press on federal and state governments to reward incineration. This request is counter intuitive. These are perverse incentives for an industry that actually costs the economy more energy than it produces from the most inefficient fuel imaginable. Incineration is just too much more expensive than readily available alternatives.

Next Steps for Cities and Counties

Cities and counties and their constituents can follow easy steps to a sustainable resource stream for local economic develop:Take an inventory of current programs and infrastructure.Compare the results to leading cities and counties that have adopted zero waste goals and programs.Fill out a voids analysis to identify the current service needs in your community.Cost out the adaptation of best practices to your hometown.Compare with current costs of disposal in landfills or incinerators.Develop an implementation plan to allow your community to liberate valuable materials for the local economy. HINT — focus on organics, construction and demolition, electronic scrap and building deconstruction. These materials comprise over half your waste stream. The technology for processing these materials and the markets for the recovered parts and materials are all local. None of this material needs to be sent to China. Rather, it can be reserved for our own local economy.For Further Reading — the following reports are fully documented and footnoted.”Incinerators in Disguise”, Greenaction for Health and the Environment, San Francisco, 2007″Stop Trashing the Climate”, Institute for Local Self-Reliance, Washington, DC 2008″An Industry Blowing Smoke”, Global Anti-Incineration Alliance, Berkeley, CA, 2009

The US can realize far more energy savings through increased recycling and composting than through spending billions to incinerate garbage. The US currently recycles 33% of its municipal discards. This modest recycling rate conserves the equivalent of about 11.9 billion gallons of gasoline. This level of recycling also reduces greenhouse gasses equivalent to taking 40 million cars off the road annually.

In comparison, the cost of recycling and compost projects is becoming less expensive, despite the downturn in market prices. Add to these savings, the real economic benefits of increased small business profits and employment, cost avoidance from landfill or incineration disposal, make recycling and composting financial necessities. In one major US city, the cost to get to from 60% diversion to 80% diversion is from $25-30 million. The cost to get to 60% to 90% diversion through incineration is several billion dollars.

As more and more recycling, composting and reuse come online, incinerators cannot compete economically. Recycling creates many more jobs than incineration, and adds more value to the materials. Organic material is needed for topsoil as well as water retention and disease suppression, making black gold worth over $100 per ton in nursery, small farm, grounds management and landscaping industries. In an incinerator this material, which is 90% water, is a ‘heat sink’.

Local level innovation is leading to practical models of recycling and composting. Hawaii County has built industrial parks for green material processing to topsoil, and, one for production of diesel from fats, oils and greases. The County has banned organics from landfills in the future as the infrastructure to compost, recover methane and other resources from organic matter is implemented. Alachua County FL has purchased 300 acres for its resource recovery park. Toronto has pioneered in food waste collection from households. Their system allows them to collect garbage just once every two weeks. In Washington, DC a simple leaf composting project will save the city at least $500,000 per year as leaves are now compost 20 miles from the city, instead of hauled 160 miles to a landfill. Extended producer responsibilities programs throughout the US are resulting in more corporate participation in take back and financial support programs for handling hard to manage materials, particularly hazardous household products.

Citizen Distrust is crippling the incineration industry. It has shot itself in the foot with gross manipulation of scientific data, which is used to try to convince people that burning garbage is good for the environment. False press announcements were released claiming signed contracts in St Lucie County, FL and Frederick, MD, in order to trick citizens into thinking there is a ‘done deal’, have backfired. Citizens and small businesses see through the huckstering. 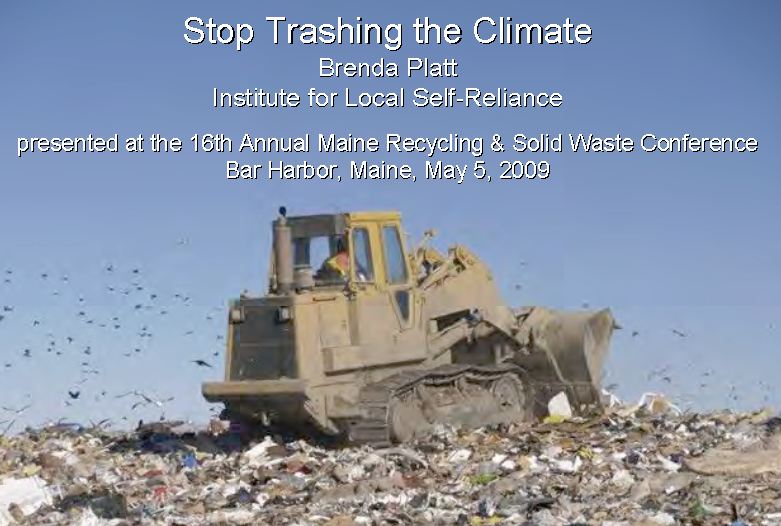