The ability to offer such fast speeds in both directions is a big draw to business customers, boosting the potential for economic development. In the press release:

“Gigabit service from LUS Fiber is one of the most robust Internet offerings on the market today,” says Terry Huval, Director of Lafayette Utilities System and LUS Fiber. “We built this community network with a promise to the people of Lafayette that we will work hard to provide them with new opportunities through this unique, state-of-the-art fiber technology…and that’s just what we’ve done.”

We have reported extensively on events surrounding the development of, and contiued corporate attack on, the LUS Fiber system. The local Lafayette Pro Fiber Blog reporter, John, notes how this advancement is rare in the US because the LUS 1 gig service can be offered to all business customers, not just those considered part of a "business core."

John also provides an excellent analysis of how LUS Fiber uses a different customer service approach than traditional ISPs. While he reports on engineering details, he also dicusses a key policy difference between providing the best service and providing any service:

Oversubscription and "best effort" is the name of the game for almost all ISPs and the bandwidth available to the last mile customer is in practice limited: if all subscribers were to use their full bandwidth at once the available speed would drop to a small fraction of the promised bandwidth. LUS has always played that game a different way, minimizing oversubscription and ensuring that even during busy hours of the day the customer's full bandwidth is available. That's in marked contrast to what I used to experience on Cox when the kids in my neighborhood got off the bus.

Kids are a major factor in the development and growth of LUS Fiber. Long ago, City-Parish President Joey Durel and his team of innovative thinkers recognized the need for high-speed fiber as a way to prepare the community youth for success. The community-owned network has been serving the local educational system for years. Local school officials recognize current benefits and have new ideas for the even faster 1 gig capabilities. John reports:

Logan McDaniel, whose LPSS (Louisiana Parish School System) has been on the wholesale network since 2005, reported that they'd already upgraded the central office to two gigs and some of the high schools to a gig. The new plan that superintendent Cooper unveiled last night included an increased use of distance learning. But the most interesting testimonial came from Dr. Menard of St. Thomas More, who noted that her school's technology initiative had placed an internet-connected device in the hands of every student, complained that they were already hitting the limit of a 100 meg connection and were eager to be the first customers of the new 1 gig service.

As noted in Phillip Dampier's StopTheCap.com coverage, AT&T and Cox Cable dominate as ISPs in the state but are only able to offer maximum 1-12 Mbps and 50 Mbps, respectively. Already, Lafayette is a 1 gig oasis in what might be described as a high-speed broadband desert. (For a visual, visit this Louisiana state broadband map and filter accordingly.)

Congrats to LUS Fiber and its proud owners - the community -  on the new capabilities of their network! 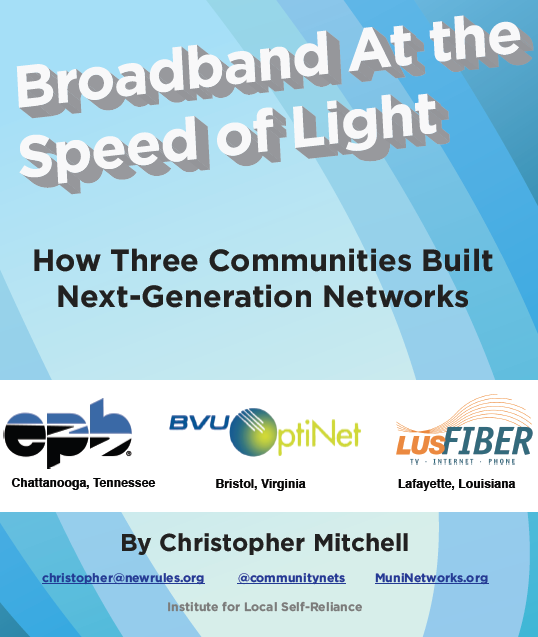