When Kansas lawmakers tabled a bill outlawing municipal broadband network, there was no sponsor’s name on it: rumor has it that’s because it was written by a lobbyist called John Federico, who is president of Kansas Cable Telecommunications Association. The bill masquerades as a pro-competition measure (pro-competition initiatives from the cable industry! Pull the other one), but it effective prohibits measures like the wildly successful Google Fiber project in Kansas City. Given that the big carriers and cable companies have shown no interest in providing fiber or even reasonably priced, reasonably provisioned broadband in most markets, this means that most people in Kansas can kiss any hope of a read broadband life goodbye.

While the bill lets cities and towns offer service in “unserved areas,” it defines such areas as those where at least 90 percent of households lack access to any broadband service, whether it be “fixed or mobile, or satellite broadband service” at the minimum broadband speed defined by the Federal Communications Commission, which is 4Mbps down and 1Mbps up.

Since satellite can be used pretty much anywhere at broadband speeds (but with annoying latency), it would be hard to identify any “unserved areas” as defined by this legislation. The bill does allow networks “for internal government purposes,” but not for any users outside the government.

The bill has unsurprisingly drawn outrage. “The language in this bill prohibits not only networks that directly offer services but even public-private partnerships and open access approaches,” wrote Christopher Mitchell of Community Broadband Networks. “This is the kind of language one would expect to see if the goal is to protect politically powerful cable and telephone company monopolies rather than just limiting local authority to deliver services. “The city of Chanute, which “has established its own fiber optic network for government use and as a service to local businesses,” condemned the legislation, according to the Chanute Tribune. 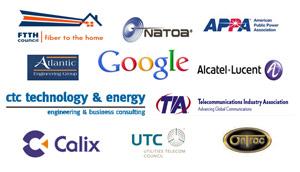